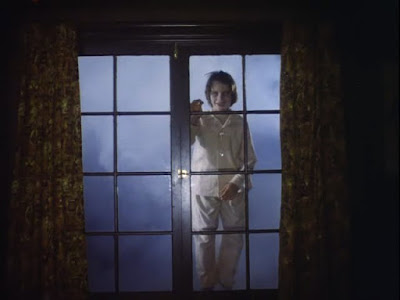 One of the reasons I enjoy horror movies is that I find them to be similar to roller coasters. They’re a huge adrenaline rushes. I am occasionally scared in the moment, but rarely for long, partly because I don’t have a belief in the supernatural. It’s rare that I find something truly scary, but the (surprise surprise) made-for-TV version of Salem’s Lot from 1979 qualifies. The truth is that I probably saw this when I was too young, so it’s one of those things that hits me on a more visceral level. It’s honestly probably not as frightening as I’m saying it is, but it’s something that always strikes me as being genuinely scary.

Here’s the thing: I don’t know why it works as well as it does. Certainly there are parts of it that I can say work really well for specific reasons. There are a couple of great jump scares and a few moments of building tension that work nearly perfectly, but as far as why the whole three-hour experience works as well as it does, I’m not sure. In a lot of ways, it shouldn’t. It almost seems like a joke to have this staring David Soul, most famous for playing Hutch on “Starsky and Hutch.” And yet it works. When I went through the They Shoot Zombies list, I was incredibly pleased to not just see this on the list, but to see it in the top-200 where it belongs.

So, assuming you’re not familiar with the source material, Salem’s Lot takes place in a small Maine town of the same name (in the book, it’s “’Salem’s Lot” with an apostrophe, short for “Jerusalem’s Lot”). If the magical word “Maine” made you think of Stephen King, you’re on the right track; this is based on his second novel, and from my experience, one of his better ones. Salem’s Lot is a vampire story and a pretty traditional one. That means the vampires are vulnerable to the traditional vampire foils—crosses, garlic, sunlight, wooden stakes—and have many of the traditional vampire powers. The one that is used the most frequently is the ability to mesmerize or charm victims.

Aside from the first couple of minutes and the tail end, Salem’s Lot is told in flashback. Author and former Salem’s Lot resident Ben Mears (David Soul) arrives in town to start working on a new book. In this case, his intent is to write a book about the Marsten House, a creepy old mansion with a disturbing past that overlooks the town. What he finds instead is that the house has recently been purchased by a man named Straker (James Friggin’ Mason!), who is planning on opening an antique shop with his partner, a man named Kurt Barlow who has not yet arrived. Soon enough, though, a few of the townspeople are sent to retrieve a large crate with what is alleged to be a piece of antique furniture inside. Once that hits town, people start disappearing and dying immediately.

Aside from our obvious bad guys (Barlow does show up eventually played without speaking by Reggie Nalder), there are a few important people who figure prominently in the plot. Susan Norton (Bonnie Bedelia!) is the local art teacher who becomes romantically involved with Ben and soon enough is involved in his crusade against the evil taking over the town. Her father, the town doctor (Ed Flanders) is also quick to sign on the anti-vampire campaign. Ben’s other compatriots are young Mark Petrie (Lance Kerwin), a horror movie fan and Jason Burke (Lew Ayres!), one of Ben’s old teachers and the first to realize that something is wrong in the town.

It’s also worth noting that the cast is filled with actors both famous and that-guy-ish. Elisha Cook Jr. (!) plays the town drunk, for instance, and Mary Windsor runs the local boarding house. Fred Willard (!) plays the local realtor. Classic that-guys Kenneth McMillan, Geoffrey Lewis, and George Dzundza have roles as well. Every few moments, it feels like you’re seeing an actor you know, and that’s a benefit here as well.

Lots of horror movies rely on jump scares, and there are certainly a few of them here, most happen at what would have been commercial breaks. Salem’s Lot, as befits its three-hour running time, was a two-part miniseries, and the best of the jump scares comes right at the end of the first episode. Fortunately for any viewers, Salem’s Lot, while it includes jump scares, doesn’t rely on them. The best scare moments happen in much longer sequences where the shocks can really build. There’s something really creepy about seeing an undead vampire kid floating outside of a friend’s second-story bedroom window.

There are other moments, too. Watching Ben sitting in a morgue making a cross from tongue depressors and tape and just waiting for a corpse to sit up. The audience knows what’s going to happen, but the scene draws out slowly, building tension the entire time. The conclusion, as Ben and Mark Petrie confront Barlow, comes complete with a swinging light and a horde of creeping vampires moving up slowly behind our heroes.

Salem’s Lot is surprisingly good, and I think I can say that even without the knowledge that a part of my love for it comes from having seen it a little too early when I was a little more impressionable. The story builds well, concludes well, and does just about everything well. Yes, it’s three hours long, but it’s three hours very well spent. If you’re even marginally a horror fan, you’d be remiss to let this one go unwatched.

Why to watch Salem’s Lot: It’s scary, and for a made-for-TV movie, it’s terrifying.
Why not to watch: No good reason.