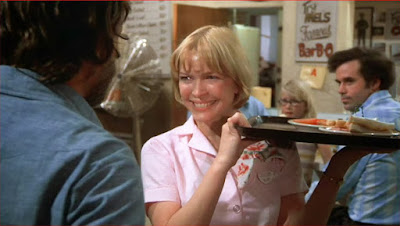 When you think of Martin Scorsese, chances are good that you think of his more mob-related movies (Casino, Goodfellas) or his more violent films (Taxi Driver, Raging Bull). I would have never pegged him as the director of Alice Doesn’t Live Here Anymore, a film that was eventually turned into a long-running television sit-com. I remember the show; my mom loved it. Naturally, I went into the movie thinking that it was going to be a clear inspiration for a good-natured show that took place in a diner. Well, I was wrong, and in this case, that’s not a bad thing.

What I didn’t know was that Alice Doesn’t Live Here Anymore was a project that was controlled almost from the start by Ellen Burstyn, who was still riding high from success in The Exorcist. Burstyn hand-picked Scorsese to direct, and Scorsese then surrounding himself with women to act in many important crew roles. The entire point behind the film was to make a film about a realistic woman with realistic problems.

The film takes place in three parts. It starts with the life of Alice Hyatt (Ellen Burstyn), a failed lounge singer living in New Mexico with her husband (Billy Green Bush) and 11-year-old son Tommy (Alfred Lutter III). It seems like a sadly typical marriage, with Alice treated much like a servant and an at least mildly antagonistic relationship between father and son. Everything changes when Alice’s husband is killed in a trucking accident. She holds a garage sale, sells off everything she cans, and decides to return to Monterey where she grew up.

Part two takes place in Phoenix, where Alice and Tommy stop so that Alice can attempt to earn some money to get them on to California. She eventually gets a job as a lounge singer and meets Ben (Harvey Keitel). Things are good until Ben’s wife Rita (Lane Bradbury) shows up at Alice’s apartment, followed by Ben who turns out to be an abusive husband and wildly violent. Now terrified of being involved with someone who has turned out to be a potential sociopath, Alice and Tommy pack the car and head west again. However, since Alice was forced to spend a lot of the money she made as a singer on new outfits to wear on the job, they’re soon out of money and stuck in Tucson.

The rest of the film takes place here. Alice gets a job waitressing at a diner run by Mel (Vic Tayback). Also working there are the mouthy and crude Flo (Diane Ladd) and the mousey and incompetent Vera (Valerie Curtin). While working, Alice meets David (Kris Kristofferson), an attractive divorced rancher who eats at the diner frequently. Meanwhile, Tommy starts running around with Audrey (Jodie Foster), a delinquent shoplifter and teenage drinker whose mother provides for her by being a prostitute. There will, of course, be problems in the relationships between David and Alice and between David and Tommy. But that’s what the conclusion is for.

As I said at the top, I was expecting something much more along the lines of a lighthearted romp. Sure, the sit-com sometimes tackled a more serious issue just like all sit-coms do eventually, but it was mostly a show about a woman working as a waitress but really wanting to be a singer and all of the wacky people she knows and works with. I watched more than my fair share of episodes because my mother loved the show. Toward the end of the show’s run, I think mom identified on some level with the title character—she was going through a divorce and living with a teenaged son (me), and so there were some certain parallels.

While there are moments of humor in the film, it’s not very lighthearted. It’s actually gritty in places, and there are moments when it feels like a more stereotypical Scorsese film. The sudden violence when Ben finds his wife in Alice’s apartment, for instance, is startling and a little scary. But there are also moments of deep emotion that play beautifully. Scorsese isn’t always noted for having a deft touch as a director, and he clearly demonstrates one here, using the camera beautifully for emotional moments and drawing the audience in to what is happening on the screen.

While the cast is uniformly good, this is absolutely Burstyn’s picture. She is onscreen for virtually all of the film’s running time, save a scene or two between Tommy and Audrey and perhaps one or two between Tommy and David. Even in those scenes, Alice is the focus of what is going on, and everything seems to happen through the lens of Alice’s point of view. Burstyn succeeds in this role by being completely believable. She looks like a real woman. Remade today, Alice would be presented to us the way unattached women are given to us in modern rom-coms: staggeringly beautiful and cursed with some man-repelling character flaw. Here, she’s genuine, and that makes the entire rest of the film work.

My expectations were shattered in terms of what I expected this to be. I thought there’d be a lot of wisecracking banter between short order cook and waitresses. Instead, it’s a real human drama, and it’s a damn fine one.

Why to watch Alice Doesn’t Live Here Anymore: For a movie that inspired a sit-com, it’s pretty damn intense.
Why not to watch: Your expectations may be more along the lines of the television show.