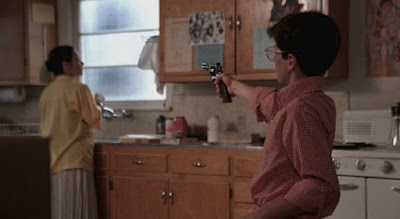 When you get to the bottom of a giant ranked list like the They Shoot Zombies, Don’t They? list, you get one of three things. The Zombies list essentially ranks films by their appearance on other compiled lists of horror films. So, at the bottom, one possibility is a newer movie that simply hasn’t been added to a lot of other “best of” lists. True to form, the bottom few hundred positions are home to most of the listed films from the last few years. Another possibility is a film that is only tangentially related to horror, meaning it won’t show up on a lot of “purer” lists. The third possibility is a film that isn’t that good, and so a lot of people don’t include it. Sadly, Bloody Birthday falls into the third type. The real question is why the hell this thing showed up on TCM.

Here’s the pitch—a trio of children are born virtually simultaneously during a solar eclipse. Now, according to the movie, this means that their astrological readings are off the charts weird, and in Bloody Birthday, astrology is a real thing. Something about Saturn, apparently. Anyway, for no other explained reason, a few days before they all turn 10, all three children become homicidal maniacs and start killing off people around their town.

Sounds fun, right? I’ll admit that the premise is actually kind of fun, if also substantially goofy and requiring a belief in completely discredited pseudoscientific nonsense. Then again, we are talking about a horror movie here, so pseudoscience is often the name of the game. I’m down with that if it’s going to be entertaining through the running time.

The problem is that Bloody Birthday is one of those films that requires everyone on screen to be intensely stupid to make it work. Yes, I do mean everyone—the killers, the victims, the police, and even the people who eventually figure it out. And yes, I do mean intensely stupid.

It soon becomes evident that while the eclipse may have made all three children sociopaths, it didn’t really do much for their ability to hide their crimes or to select victims. Most of their crimes are clearly murders, and are not disguised as accidents (they do try once and seem to get away with it). Hell, they shoot people, and we’re led to believe that shooting through a jacket around the muzzle of a pistol is enough to prevent everyone else from hearing the gunshot at an elementary school. They kill people in the middle of the day with potential witnesses standing a couple of feet away. I’d be a lot more willing to buy into this had these kids shown even a little creative cunning, but they don’t. They just can’t wait to kill people at any time of the day or year.

I should probably say something about the kids themselves. Debbie (Elizabeth Hoy) looks a hell of a lot like the star of Alice, Sweet Alice, but is in fact most easily recognizable as the youngest daughter in the Chez Paul scene from The Blues Brothers. Of the three kids, she’s probably the best at disguising her apparent guilt throughout the film. The two boys, Steven (Andrew Freeman) and Curtis (Billy Jayne) are more or less around to kill people. One of their prime potential victims is classmate Timmy (K.C. Martel) along with his sister Joyce (Lori Lethin). Another potential (and eventual) victim is Debbie’s sister Beverly (Julie Brown—yes, the one from Earth Girls are Easy) who is initially Debbie’s source of income. She allows neighborhood boys to watch Beverly undress and dance around her bedroom for a quarter. In fact, seeing a circa-1980 Julie Brown shimmying in the buff is one of the few pleasures here.

The idea of murderous children is, of course, one that’s been with us in movies for some time. Older films like Village of the Damned and The Bad Seed were around for more than a decade before Bloody Birthday. It’s an apt comparison, and one that doesn’t do any favors for Bloody Birthday. The kids in those movies, and in plenty of others (various incarnations of Damien, Gage from Pet Sematary, Children of the Corn) are either smart or possessed of a particular animal cunning. Here, we’ve got murder-happy kids who are absolutely begging to get caught by anyone walking past.

There was some potential here, but it really doesn’t go anywhere. And that’s too damn bad.

Why to watch Bloody Birthday: Julie Brown in her birthday suit.
Why not to watch: It is intensely stupid.