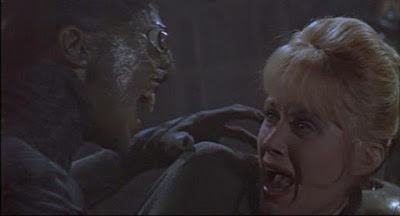 When you talk about classic horror movies, you have to spend at least a little bit of time talking about Hammer films. Hammer horror films are kind of what made horror films stay around for a few decades. They were fun, had a touch of class to them, and some of them were genuinely good. There was a sense of wanting to keep the gothic feel of the classic horror movies, but also move them a little bit more into the modern world. Hammer remade all of the classics, of course, but also created their own monsters and scares, as they did with The Reptile. Instead of banking on the name recognition of the monster, this film tries to blaze a new path by giving us a creature that certainly has ties to the classics but is different in significant ways.

As fitting with the ties to the gothic, The Reptile takes place at the turn of the previous century. We see a man exploring an old house when he is suddenly attacked. He runs from the house and dies, the skin on his face turned black and a white foam coming out of his mouth. Nice way to set the scene, huh? Anyway, flash forward a day or two and we’re sitting with the dead man’s brother, Harry Spalding (Ray Barrett) and his new wife Valerie (Jennifer Daniel), who have learned that Harry’s brother has willed them his little cabin. They are warned off staying there, but since they are newly married, they decide that it’s as good a place as any to start their life together, and off they go.

Sadly for the Spaldings, life in Clagmoor Heath, Cornwall, isn’t what they expected. It’s an insular little village not too keen on welcoming outsiders into their midst. When they find the inside of their new house has been ransacked, Harry confronts the locals at the village pub and they give him a solid cold shoulder. In fact, the barman Tom (Michael Ripper—great name for a horror movie actor) is the only one to befriend him. Tom also warns Harry to get out, saying that while the cause of death on Harry’s brother’s death certificate was listed as heart failure, he really died of what the locals call “the black death.” That night, Harry is accosted by local crazy man Mad Peter (John Laurie), who warns them that “they” killed his brother. Later that night, Mad Peter turns up dead of the black death as well. Harry and Tom notice a couple of puncture wounds on the back of Mad Peter’s neck.

Through all of this, we are also introduced to the Franklyn family, as it is. Dr. Franklyn (Noel Willman) is a stern old theologian who seems domineering and abusive to his daughter Anna (Jacqueline Pearce). The only other resident in the house is a servant (Marne Maitland) known only as “The Malay.” Anna seems like a nice girl, but Dr. Franklyn is a bastard, mean to everyone who he speaks to and unpleasant in all respects.

The problem with The Reptile is that it’s not too difficult to figure out what is actually going on. A look at the poster reveals that the monster is a human/reptile thing, and there are only a few possible candidates. Since the reptile of the title has long, flowing hair…we’re down to one candidate. In fact, the only real mystery here is why all of this is happening, and we don’t get that until the very end of the film. Everything else that happens—the slow discovery by Harry and Tom of what happened to past victims, the slow realization that the Franklyn house is the source of the evil—comes at a rate where the audience knows far more than the characters in the film at all times. Watching them do deductive work that we’ve already done isn’t that interesting.

Where The Reptile fails in terms of plot and mystery, it succeeds in just about everything else. This is a stylish film, exactly what you’d expect from classic Hammer horror. The sets and costuming are both great, and it really does feel like a story that takes place a hundred years ago. Admittedly the practical effects are a bit goofy. Victims of the reptile’s bite are quickly stricken with a terrible case of shoe polish and a mouth full of Alka-Seltzer. But everything else looks great. I actually really like the set design, especially for the Franklyn house, even if that set design includes a cavernous basement complete with unexplained bubbling pool of frothy liquid. As for the reptile itself, there are moments that the makeup looks great and moments when it looks like papier-mache; we’ll call that one neither a win nor a loss.

With The Reptile, Hammer tried to build on the gothic themes they’d been hitting for years, and they are partially successful, but only partially. The reptile of the title is not the sort of creature that’s going to join the ranks of Dracula or Imhotep. Without the established lore behind it, a lot more is needed to build up the story and the mystery to make this a legitimate movie monster, and none of that really happens until the last few minutes. There’s a kernel of something here, but it’s not built up enough. Because of that, The Reptile is interesting, but not great.

Why to watch The Reptile: Hammer horror is always worth your time.
Why not to watch: The attempt to create a new monster is only mildly successful.