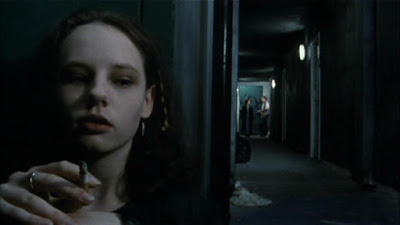 The Fangoria list that I’m following (and getting closer and closer to finishing) is filled with obscurities, some of which deserve to be there. I’m always a little leery jumping into one of these movies because I never really know what I’m going to get. Some of them have turned out to be pretty interesting, while others have been absolutely terrible. With Urban Ghost Story, it’s a little of both. This is a film that has ambitions far greater than its budget and cast, and some of it works. That which doesn’t work doesn’t because of a screenplay that delves far too heavily into the clichés of the genre.

Urban Ghost Story takes place in Scotland. It is, in fact, a Scottish production. Most of the cast, with the exception of Billy Boyd, haven’t had massive careers. The film is very clearly made on a low budget. There’s not a great deal here in terms of special effects or even makeup and costuming, but that’s par for the course with a movie like this one. We’re given a very gritty, urban environment, with most of the film taking place in a crumbling block of flats where it seems that everyone is on the public dole and nobody has any money. A good way to keep the expense down is to make everyone poor and thus not having much in the way of wardrobe or personal items.

Urban Ghost Story focuses on Lizzie Fisher (Heather Ann Foster), a troubled and trouble-making 14-year-old living with her mother Kate (Stephanie Buttle) and her younger brother Alex (Alan Owen). Kate’s husband has left the picture, although she claims that he’ll be coming back any day. The film opens with a serious traffic accident. Lizzie, in the aftermath of the crash, dies for about two minutes but is brought back. Her companion in the accident is not so lucky; he dies when the car explodes.

At a follow-up trial, it is revealed that the car was stolen and that Lizzie, while naturally in trouble for the accident, was not driving and is thus not held responsible for her friend’s death. Eventually, she is released from the hospital, and this is where the strange things start happening. It starts slowly (as these things often do) but quickly builds to what looks like a poltergeist infestation. Furniture moves, things get thrown around, and eventually Kate goes to a local tabloid newspaper reporter named John Fox (Jason Connery) for help. Fox initially looks at this as something from which he can get a couple of stories before exposing it as a hoax until things become much more intense and impossible to deny.

Because it doesn’t have much of a budget, Urban Ghost Story attempts to do quite a bit with not much. There are a few good jumps with moving furniture early on when things start ramping up. But because there’s not much of a budget, a lot is done to bring in other ideas of social problems and issues to make sure that everyone knows the Fishers are poor and live in a seedy world. Lizzie spends a lot of time with neighbor Kerrie (Nicola Stapleton) who specifically got pregnant at 16 so that she could go on the public dole. Kerrie supplements her income by robbing local shops and frequently abandons her child in her apartment. The Fishers are also terrorized by a local loan shark (Billy Boyd) who might also be their landlord. It’s never really clear.

The best thing about Urban Ghost Story is that it has a great deal of ambition. It wants to explore these social issues in the guise of the ghost story. It does, but it doesn’t do it very well. Both the lack of budget and the relative inexperience of the cast mean that while these issues are clearly a part of the film, everything gets less attention than it should. It’s definitely a horror film, but the ghost problem is only partially explained. This ghost problem is supposed to be a metaphor for the social problems, but those problems are not fully developed, either.

A more personal issue I had with the film is the accents. Since the only way I could find this film was online, there wasn’t a subtitle track, and listening to a bunch of lower income Glaswegians is maddening when you literally can’t decipher 30% of what the hell they’re saying.

Probably the saddest thing to happen from Urban Ghost Story is that, with the exception of Billy Boyd, it doesn’t seem to have done anything for anyone’s career. That’s a shame, because unlike a lot of low/no-budget horror movies, Urban Ghost Story has ambitions far above a simple gross-out. It wants to rise above its constraints and it does show a few flashes of skill, but there’s simply not enough there.

I wanted to like this. It’s too concerned with those ambitions, though, and fails on the basic need of providing some quality scares. Because of that, it’s not a great ghost story and it’s also not that good of a social issues movie. Under the Shadow is the goal here, but it falls short on all aspects.

Why to watch Urban Ghost Story: It has ambition.
Why not to watch: Too many clichés and too-thick accents.