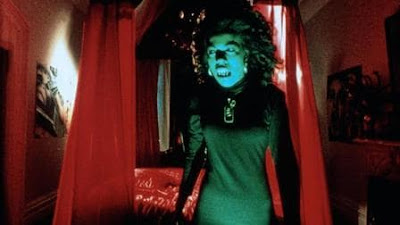 When the opening credits of a movie contain the name Lloyd Kaufman, it suggests a few things. It means we’re probably going to have low production values and that the movie is probably going to contain a lot of really stupid humor. Kaufman is the man in charge of Troma, home of films like The Toxic Avenger and Sgt. Kabukiman, NYPD. It’s unusual, then, to find a film like Def by Temptation with Kaufman’s name on it. While certainly not a great horror film, it’s one that plays it a lot closer to straight than the typical Troma film.

It’s worth noting that this is very much a Blaxploitation film. There isn’t a single white face anywhere on screen that I can recall, and if there is one, it’s on a television or doesn’t have a speaking role. This is very much a horror movie designed with a black audience in mind. There’s a real effort to give this an urban flair as much as it possibly can based on its very low budget.

To give this the elevator pitch, a minister in training named Joel (James Bond III, who also wrote the screenplay and directed) who is taking a short break before beginning his ministry. He travels to New York to visit his old friend K (Kadeem Hardison), who is now working as an actor. Meanwhile, a succubus (Cynthia Bond) is stalking horny men in a specific club in New York. While she will take whatever she can get in terms of victims, someone like Joel, who is both pure in spirit and is also the last of his family line, is the motherlode.

K encounters the succubus early in the film, but is saved from his terrible fate because Joel is showing up and he needs to take care of his friend. He takes Joel out and Joel meets the succubus on his own and she immediately forgets about K and pursues Joel with everything she can. K encounters Dougy (Bill Nunn), who spends the first half of the film or so being more or less woman repellent, trying a variety of lines on every woman who walks into the club. In reality, Dougy is some sort of agent who has been tasked with tracking down supernatural threats. His current target is the succubus, which makes him a clear ally for K, who wants to rescue his friend.

The truth is that Def by Temptation has its heart in the right place but doesn’t really do anything that well. James Bond III isn’t much of an actor and never really looks the part of anything he’s trying to be here. Kadeem Hardison is another problem. Hardison is a likable actor in a lot of roles, but all of the best will in the world isn’t going to turn him into the urban tough guy the movie really wants him to be. Bill Nunn was a fine actor, but is mostly wasted here in a role that doesn’t entirely suit him. Not even the awesome power of a Samuel L. Jackson cameo as Joel’s father can save the film entirely.

The script hurts it as well. There’s no clear reason why Dougy would suddenly out himself as some sort of agent hunting the supernatural. It seems very much like that’s something that needed to happen to get Dougy involved in the third act, and it doesn’t work at all. Establishing his persona in this way earlier in the film would help this make a lot more sense, even if it was still something that still doesn’t pass the stink test. Beyond this, it takes a long time for anything to happen, and while there are some great moments of the succubus attacking her victims, there’s a long time between anything interesting happening. Part of this is that Joel isn’t a very interesting character, and he spends a lot of time on screen being romanced by the succubus. These are scenes that don’t work well regardless of how tempting our succubus might actually be.

The biggest problem with Def by Temptation is that it’s cheap. It’s sadly cheap in just about every possible aspect. It needed a few more script revisions and could have used with a little more in terms of the budget for locations. It feels exactly like what it is—a movie made for a specific audience to exploit a particular market and made as cheaply as possible to get us there.

It has potential, and that’s probably the saddest thing about it. There’s a story here and there’s something that could be turned into an interesting horror movie. A more experienced director with double (or triple) the budget and a better actor in the role of Joel would help it a lot.

Of course, I’m also going to object to just how heavily this hammers the religion. According to Def by Temptation, Jesus is the answer to everything, and if you don’t have Jesus and don’t do works, well, you’re certainly going to be fodder for the succubus. The focus on works seems oddly Catholic, just another thing that seems just off-kilter or doesn’t quite fit with what the film purports itself to be. Kind of a shame; I wanted to like it a lot more than I did.

Why to watch Def by Temptation: It’s an interesting perspective for a horror movie.
Why not to watch: Plot problems and a small budget make a film with holes.