You'll Want to Escape, Though 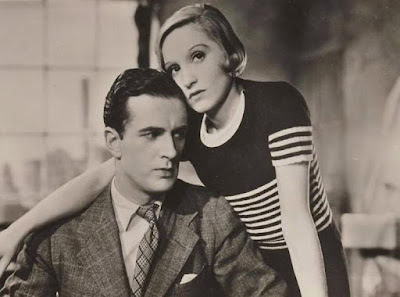 When I drop back into the earliest years of Oscar, I generally know a couple of things. One thing I know, at least with a movie like Escape Me Never is that I’m watching a movie that probably no one reading this blog has seen. There is a version of this from the 1940s starring Errol Flynn and Ida Lupino that is much better known, but the version that was nominated for an Oscar for 1935, so that’s the one I watched. I think it’s safe to say there’s a reason that not a lot of people have seen this.

Oh, Escape Me Never isn’t terrible. One of the real problems is that it desperately needs to be restored based on the version that I was able to find online. At one point early in the film, we’re shown a letter that I’m sure is important to the plot, but there was no way in hell I could read it because of the blurry nature of this print. It’s a shame, and as I say whenever this happens, I do my best not to let something like technical difficulties do anything to affect my overall opinion of the film itself.

What we have in Escape Me Never is less a love square and more a love conga line where not everyone is in love with everyone else. No, it’s more Shakespearean than that, with a bunch of people in love with each other in various configurations. This starts with Gemma Jones (Elisabeth Bergner), who, scandalizing for the time the film was made, has a child out of wedlock. She spends her time in Venice latching onto school groups touring museums and cathedrals because the tours typically end with food.

Gemma claims to live with the father of her child, the son of a famous composer. This is of concern to the McClean family vacationing in Venice because they have just discovered that their daughter Fenella (Penelope Dudley-Ward) has become engaged to the son of a famous composer. As it happens, Fenella is stepping out with Caryl Sanger (Griffith Jones) while Gemma is involved with Caryl’s brother Sebastian (Hugh Sinclair). Scandalized, the McCleans flee Venice, whereupon Gemma discovers their mistake. Caryl, Sebastian, and Gemma pursue them so that the mistake can be explained.

Unfortunately for everyone involved, Sebastian is the first one to find the McCleans so that he can speak on behalf of his brother, and the person he finds is Fenella. The two are immediately smitten with each other, but everything works out for the McClean parents, and Fenella is married to Caryl. Eventually, Sebastian marries Gemma as well, but his obsession with Fenella will not leave him, and she becomes his muse for the music he is writing. Will Sebastian realize his love for Gemma? Will Caryl discover that his wife is in love with his brother? And what will happen with Gemma’s child?

I mentioned at the top that there are certain things I know or expect when I got to a movie like Escape Me Never. One of those things is that I know not to expect a great deal. While there are a few hidden gems in these early films, most of the early films that are still known and remembered are for a reason, and a lot of the ones that are forgotten (like this one) have been ignored for a reason. So it was mildly surprising that Elisabeth Bergner is wildly entertaining in the early stages of the film. In the early minutes, she winds up in the McClean’s hotel room and spins a yarn about her past and present, a story punctuated with questions to her audience if she likes her answer. The implication is that if they don’t like what she has to say, she’ll happily change her answer to something they do like.

In a way, Bergner’s Gemma is an early prototype of the manic pixie dream girl, except that she’s clearly not a character designed to provide a great deal of motivation for the male character. This is her movie more than it is anyone else’s, even if much of the handwringing comes from his own artistic struggles while hers come from being ignored by her husband. Sadly, this sort of refreshing character can’t last, and eventually the film does get bogged down in the various romantic configurations. That’s sad, because she is clearly the best and most interesting thing in the film, and Bergner herself is great until this bellyflops into melodrama.

Why to watch Escape Me Never: Elisabeth Bergner is a revelation for two-thirds of the film.
Why not to watch: It drops heavily into syrupy melodrama