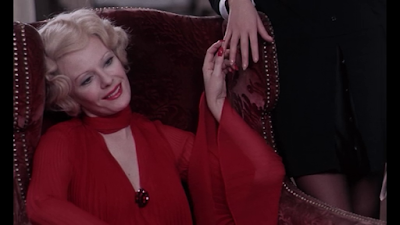 If you’re going to do an even slightly erotic thriller using one of the classic monsters, your best choice is a vampire. Even before vampires became sparkly assholes in teen novels, there was a sense of the romantic about them. So when Daughters of Darkness (or Les Levres Rouges in the original French) showed up, there was at least the potential for something both interesting and sexy. I expected something like an earlier version of The Hunger, which is probably the most sexually charged vampire movie I’ve seen. And then I came to a terrible realization: Daughters of Darkness stars Delphine Seyrig.

I have a history with Delphine Seyrig’s films. I genuinely like The Discreet Charm of the Bourgeoisie. I’ve seen three of her other films: India Song, Jeanne Dielmann, and Last Year at Marienbad and I hate them. I don’t mean that I didn’t like them much. I mean I actively hate them. I’m very much in the minority on all three films, incidentally. All three are critical darlings with high ratings from both professional critics and viewers alike. But I hate them almost as much as I can hate an inanimate object. Seyrig, since the first moment I put one of her films in the spinner, she has been a muse of profanity and anger for me. With the best will in the world to be as fair as possible, Daughters of Darkness started with a massive strike against it.

A young couple, Stefan (John Karlen) and Valerie (Danielle Ouimet) are newlyweds who arrive at an empty hotel in the off-season. They book a room for their honeymoon and settle in. shortly after their arrival, two other guests appear. These are Countess Elizabeth Bathory (Delphine Seyrig) and her secretary/assistant/lover Ilona (Andrea Rau). The hotel clerk (Paul Esser) is convinced that he saw the Countess looking exactly the same forty years earlier when he was a young bellboy at the hotel.

What happens isn’t terribly surprising, really. The Countess, who is very clearly a vampire, becomes obsessed with the young honeymooning couple. The couple extends their stay at the hotel because Stefan is convinced—and with cause, we find out—that his mother will not approve of Valerie. Seduction happens in various combinations.

What I can’t get a handle on here is the sexual politics of this film. Stefan and the Countess, while recounting the horrifying crimes of the historical Elizabeth Bathory, seriously just about orgasm in the hotel lobby while Valerie runs off. Later, prompted by pretty much nothing, Stefan beats the living shit out of his wife with a belt, perhaps because he feels that he will no longer be welcomed by his family because he has married Valerie. Valerie (naturally) runs off, but the Countess confronts her and convinces her to return to the hotel. Meanwhile, Stefan has been effectively seduced by Ilona, who reacts badly when he attempts to pull her into the shower with him (since vampires are affected by running water). When she tries to get away, she slips and falls on Stefan’s straight razor, killing her instantly.

The film culminates in something like a deadly love triangle, with both Stefan and Valerie obsessed with the Countess, who is sexually fluid enough that she seems willing to go in either direction. She makes her decision (I won’t spoil it, but it’s not a hard guess), and she and her new lover speed off into the night only to end in a completely WTF moment that seems to exist only because that’s the way the filmmakers wanted it to end.

I mentioned above that The Hunger is probably the sexiest vampire film I’ve ever seen, and it appears in many ways that Daughters of Darkness is the precursor. The sexual openness and the essentially frank, unashamed depiction of a lesbian relationship in 1971 is surprising. The Countess and Ilona are clearly lovers, and no one seems to care, even though it would still raise an eyebrow or two today (although admittedly not nearly as many as it would have in 1971). Even the ending has the same sort of feel to it, albeit a little more coherent than that on offer with The Hunger.

I’m actually a little surprised that I liked this as much as I did, what with all of the Delphine Seyrig-ness permeating the film. Seyrig actually isn’t bad. The costuming is particularly interesting. Seyrig throughout seems to hearken back to Marlene Dietrich while Andrea Rau’s Ilona is as close to Louise Brooks circa Pandora’s Box as humanly possible.

What I don’t understand is the sudden dip into sadism and spousal abuse. It seems needless, except to make the character responsible immediately unlikeable and non-sympathetic. Seriously, having him have sex with another woman while on his honeymoon should have been enough for that, but instead we get a vicious beating with a belt. Was that necessary?

Daughters of Darkness is good. I’m not convinced that it’s great, but it does do a lot right. The senseless and pointless violence and the ridiculous ending that doesn’t make a great deal of sense downgrade it, though.

Why to watch Daughters of Darkness: For most of its running time, it lives up to its name.
Why not to watch: Delphine Goddam Seyrig.