Ten Days of Terror!: Creature from the Black Lagoon 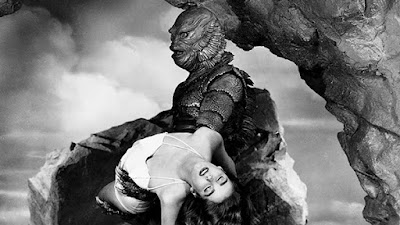 Of the classic Universal monster movies, Creature from the Black Lagoon is in many ways the strangest. Most of the monsters—Frankenstein’s monster, Dracula, the Wolf Man, the Invisible Man, the Mummy—have precedents in literature or folklore. I’m not sure that’s the case with the Gill Man. He seems to be something made from whole, scaly cloth. The creature is presented as something like an evolutionary dead end, sort of a prehistoric progenitor of the link between our ancient aquatic past and our land-based current form. In that respect, it’s kind of silly. However, I kind of love the Gill Man because he is so freakin’ weird.

Creature from the Black Lagoon is something of a high concept film. What would happen if a group of scientists discovered a half-fish/half-man monster in the Amazon? Dr. Carl Maia (Antonio Moreno) discovers a massive fossilized claw dating back to the Devonian while on a geology expedition in the Amazon. He shows it to Dr. David Reed (Richard Carlson), an ichthyologist currently guesting at Maia’s institute. Reed and his scientist girlfriend Kay Lawrence (Julie Adams) propose mounting an expedition, which is immediately agreed to by their boss Mark Williams (Richard Denning) in an effort to find the rest of the skeleton.

So off they go to the Amazon on a tramp steamer captained by a dude named Lucas (Nestor Paiva) along with a couple of crew members and another scientist named Edwin Thompson (Whit Bissell). They discover that Maia’s camp has been destroyed and his two men have been killed by some creature, presumably a jaguar. After a little digging with no results, they decide to head down river to the titular black lagoon under the assumption that rock from the original location may have washed down over the course of millennia. And, as you might expect, living in that lagoon is the Gill Man.

What follows is a pretty much what you expect. The creature shows up, kills a few characters, and naturally decides to kidnap Kay, the one woman on the expedition. The men of the expedition, specifically the science-minded David and the finance and public relations-minded Mark fight over the best way to handle the creature. David wants to capture it if possible while Mark doesn’t care if they kill or capture it as long as they bring it back, since a creature like this (or its body) will mean tons and tons of funding.

What works here, because a lot of what happens is pretty standard Universal Monster stuff, is that the creature is actually pretty smart. With a couple of dead people on the ship and Edwin Thompson badly mauled, the expedition decides to pull out, but finds the way blocked by a deadfall of trees planted by the creature to stop them from getting away. The scientists are smart as well, attempting to capture the creature with a mild poison that will knock it out dumped into the water. A lot of monster movies follow a particular pattern that is pretty obvious for anyone who has seen any of them. Creature from the Black Lagoon does, too, but there’s a surprising amount of intelligence in the way it all plays out.

One of the other great things here is that like many classic movies, all of this is done for real. The Gill Man is obviously a dude in a suit, but it’s a really good costume. It looks fantastic, as does the bulk of the underwater photography.

What’s really interesting to me here is how Creature from the Black Lagoon fits in with the other classic Universal monsters. Because it doesn’t have that classic feel to it, at least from more Euro-centric mythologies, the Gill Man does feel a bit like an oddball. But he does seem to fit in as well. As with most of the great Universal monsters, there’s a sense of humanity to him. Sure, he’s aggressive, but a great deal of his aggression comes from people invading his place and literally attacking him. He’s almost as easy to sympathize with as Frankenstein’s monster, and that’s saying quite a bit. So, it’s an odd fit, but a fit nonetheless.

I also like the science angle here. Sure, the idea of a half-human/half-fish guy that has more or less existed since the Devonian is pretty silly, but the rest of it actually works.

It’s hard not to like Creature from the Black Lagoon. It’s a little bit short, but it’s not terribly short and I’m not sure it would be any better made a little longer. I’m happy to have seen this, and this is absolutely a movie I’d watch again at the drop of a hat.

Why to watch Creature from the Black Lagoon: Classic Universal monsters should all be cherished.
Why not to watch: It feels a little more detached from the classic mythology of those monsters.