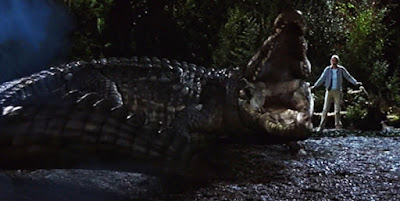 Oh, I really wanted to like Lake Placid. I wanted to like it when I saw it in the theater in 1999 and I wanted to like it when I rewatched it. It’s rare that an exploitative horror movie sports a cast as impressive as this one—Bill Pullman, Bridget Fonda, Betty White, Brendan Gleeson, and Oliver Platt. Plenty of horror movies attempt comedy with physical gags and don’t pay as much attention to a solidly funny script. Lake Placid is so close to being everything a good horror/action/comedy film can be and it comes up short over and over. It’s disappointing because it could have been a classic instead of a disappointment.

Lake Placid is a high concept film in the sense that the entire plot can be related in a single sentence: a 30-foot crocodile turns up in a lake in Maine and terrorizes the area. If you prefer, “crocodile Jaws in Maine.” That’s seriously it.

Kelly Scott (Bridget Fonda) is a paleontologist working in an unnamed New York museum. When the film opens (after our initial guy-bitten-in-half scare), she is dumped by her boyfriend/boss for another coworker. News of the attack in Maine comes in, along with the discovery of what appears to be a prehistoric tooth. To get her out of the office and away from the tension, Kelly is sent off to Maine to investigate.

Big shock—it’s a crocodile, although we don’t get real confirmation of that until a good distance into the film. Along with Kelly, we have a convergence of multiple personalities on the scene. The most prominent is Fish and Game officer Jack Wells (Bill Pullman), who is also in the area to investigate the attack from the start of the film. Naturally the local sheriff, Hank Keough (Brendan Gleeson) is investigating with all of his deputies. And, as the investigation kicks in, we get the arrival of Hector Cyr (Oliver Platt), an independently wealthy mythology professor/crocodile nut, who shows up because before anyone knows we’re dealing with a crocodile, he knows that we’re dealing with a crocodile.

So, here’s the dynamic, and we’re going to have lots of clichés coming from all directions. Kelly is a prissy New York snob who spends a good chunk of the film making fun of Maine and complaining about how everyone in Maine is an uneducated hick not worth her time. Of course, she’s going to end the film romantically attached to officer Jack Wells, because we can’t have a movie with an unattached Bridget Fonda or an unattached Bill Pullman. Snobbish and sarcastic Hector Cyr spends the entire movie sparring verbally with Sheriff Keough, who routinely gets caught in Hector’s various crocodile snares and traps.

We also get the bright spot of Betty White as Delores Bickerman, an eccentric widow who lives on the croc-infested lake. We discover soon enough that Mrs. Bickerman knows all about the massive crocodile since she feeds it cows and because the croc is responsible for the death of her husband. Mrs. Bickerman exists in Lake Placid solely as comic relief. It’s entertaining to hear Betty White drop a few crude remarks.

There are multiple problems with Lake Placid. One of the main problems is that the film is ridiculously short, clocking in just a hair over 80 minutes, which isn’t really enough to establish the characters beyond their cliché stereotypes and still give us lots of fun with the giant crocodile. Second, and more serious, is the low body count. There are two human deaths in Lake Placid, which seems quite low for a modern horror film, especially since one of those deaths comes in the first couple of minutes. Because the film wants to focus a great deal on comedic dialogue and character interactions, the focus gets pulled away from the creature feature aspects of the film, and this is what really should be front and center. It almost wants to be character driven, but it’s not expansive enough to be so.

And so, Lake Placid seems entirely misfocused. It wants to be a funny movie with some gore elements, and it kind of is, but it isn’t enough of either. It’s right on the edge of being a really satisfying horror comedy, but can’t really seal the deal for me, even though it really wants to.

It’s a shame, too, because this is such a good cast. There’s a lot that could be done with these people, and to have them in a giant animal monster movie offers such an opportunity for potential entertainment that it’s sad when it comes up so short, both in terms of quality and in terms of running time. Expand this out another 15 minutes, develop the characters a little more, and give us a couple more quality kills, and we’d have something instead of just indications of something.

Is it worth watching? Kind of. If nothing else, there’s a scene where the croc comes out of the water and eats a bear, and that’s the kind of thing that makes watching cheap horror films worth it, even when it’s obviously done with low-rent CGI.

Why to watch Lake Placid: A motherfucking crocodile eats a motherfucking bear.
Why not to watch: It wastes a tremendously good cast.