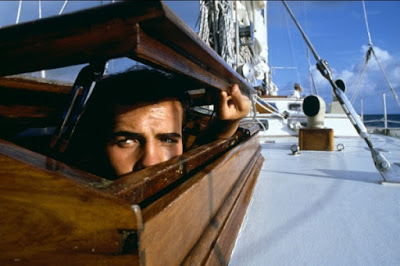 Say what you will about Sam Neill, but this is a guy who doesn’t shy away from some screwed up movies. Between Possesssion, Event Horizon, and Sleeping Dogs, this is a guy not afraid of going to some dark places when the movie calls for it. Dead Calm isn’t as dark or as weird as some of his other movies, but it’s a pretty dark tale. This is also fairly early in Nicole Kidman’s career, years before her face was Botoxed taut. It also features Billy Zane as a bad guy on a boat nearly a decade before he was a bad guy on a boat in Titanic.

The premise is simple, and comes with the pedigree of having been based on the same story that Orson Welles started filming in the late 1960s. Like many a good thriller, it’ also decidedly simple. We start in the cruelest way possible. Australian Naval officer John Ingram (Sam Neill) returns to port to see his wife Rae (Nicole Kidman) who has just been in a terrible car accident that has killed their toddler son. Thanks, movie!

As a way of recovering, John and Rae take their boat out into the middle of nowhere in the Pacific, recovering by way of avoiding humanity and being alone together. It’s a good plan and seems to be working, as Rae seems to be slowly coming out of her deep depression. Then, after some time of seeing no one, a boat appears on the horizon. As they look at the boat through binoculars, it’s soon evident that someone is coming from that boat to theirs in a dinghy.

That person is Hughie Warriner (Billy Zane). He claims that his boat is sinking, the motor and radio destroyed, and that everyone who had been on board with him is dead from botulism which he avoided by not eating the canned salmon. When Hughie has been pacified and is asleep, John takes the dinghy back over to the crippled craft where he discovers that much of Hughie has said is true. The important things, though, were lies. Everyone on board the crippled ship is indeed dead, but they all appear to have been killed by John in a fit of rage.

Meanwhile back on the other ship, Hughie has woken up, knocked out Rae, and taken over the ship. He’s started sailing away, leaving John on a sinking boat in the middle of nowhere with no working radio. And that’s the set up. The rest of the movie concerns Rae trying to survive as best she can and get back to her husband while John attempts to repair the damaged boat to pursue Hughie and his wife. While John struggles with survival against the ocean, Rae struggles to survive the violent mood swings of her captor.

A thriller with this simple of a story, a few things have to be right to make the film work. The performances have to be solid to start with, and all three here are good. Second, we need tight, accurate direction. There are really only a couple of sets here, the two ships, and director Phillip Noyce is smart enough to make the two boats almost characters in their own right. The limited geography is used very carefully to create a sense of claustrophobia. That’s pretty impressive, given that outside of the ships is the open ocean.

There are essentially two stories here. The first concerns what Rae has to do to survive her time with Hughie. This includes alternately seducing him, trying to contact her husband through the radio, and trying to find ways to take back control of the boat or defend herself. The second story concerns John’s attempts to keep the damaged boat afloat and get both the radio and motor working again so that he can chase after his wife and her captor. Both stories are good and entertaining. The first is the true thriller part of the film while the second boarders on action, but is more of a crime movie, since as he attempts to repair the boat, John also finds clues concerning what happened.

Not everything works here. The ending, which I will not reveal, comes too close to being a cliché for me to really be comfortable with it. It’s probably to be expected, honestly, that a film in this genre would enter this territory, either to do the expected or to do the complete opposite of the expected. That’s a bit of a disappointment. But it’s a minor one, and one that is evident only after the fact and after the credits role. Overall, this is a tight, entertaining thriller, and one very much worth seeing.

Why to watch Dead Calm: A pretty solid thriller with a minimal cast.
Why not to watch: Zoolander taught us that we should do what our friend Billy Zane says. He’s a cool dude. Zoolander lied.