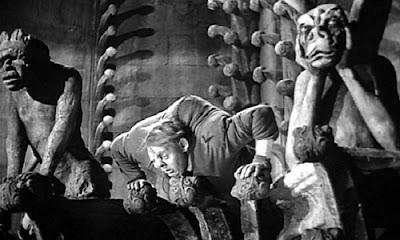 A few years ago, I spent my Friday posts by going through the relevant Oscar categories for 1939. Several times, the 1939 version of The Hunchback of Notre Dame was brought up by people who recommended it for various awards. So when it showed up on TCM, I figured it was time to watch it. I know the basic story, of course, despite this being the first version of the story I’d ever seen. I know; I’m as shocked as you are.

Anyway, I’m sure that most of my readers are familiar with the basics of the story. There’s a misshapen hunchback named Quasimodo (Charles Laughton) who is deaf and who rings the bells at Notre Dame Cathedral. One day a group of gypsies shows up. Jean Frollo (Cedric Hardwicke) wants to rid Paris of everything he considers evil. This includes the recent invention of the printing press and, naturally, the gypsies, which is why the gypsies are prohibited from entering the city. Things are made more problematic for Frollo when he catches sight of Esmerelda (Maureen O’Hara), a beautiful dancing gypsy. For him, the sudden carnal stirrings are yet another reason why the gypsies need to go.

Esmerelda is caught by guards, and runs to Notre Dame where she requests sanctuary, which is granted by the archbishop (Walter Hampden). She also meets King Louis XI (Harry Davenport) and asks for mercy for her people, which he happily grants. When she meets Quasimodo, she is frightened and runs away, but he chases after her to bring her back to the cathedral. A poet named Gringoire (Edmond O’Brien) witnesses this and calls the Captain of the guard Phoebus (Alan Marshal), who rescues her from Quasimodo.

Quasimodo is sentenced to 50 lashes for his crime, and then sentenced to stand in the dock for an extra hour. Esmerelda takes pity on him and gives him water, which awakens his love for her. Tragically, she’s already taken two times over. First, her timely rescue has caused her to fall hard for the dashing Phoebus. Second, when Gringoire is captured for trespassing in the Court of Miracles, the home of the beggars, he is sentenced to hang by beggar king Clopin (Thomas Mitchell) unless someone will consent to marry him. Tender-hearted Esmerelda agrees and marries him despite already pining for Phoebus.

Ultimately, the plot turns on the lusts of Jean Frollo. Desperate for Esmerelda and equally desperate to be rid of her temptations, he kills Phoebus and pins the murder on her. But of course Quasimodo loves her as well and steals her from the hangman’s noose and returns her to the sanctuary of the church. Now we have warring factions. The nobility want to revoke the sanctuary of the church so she can be punished. The guildsmen want the sanctuary upheld. The beggars and thieves just want Esmerelda safe. And all of them have to deal with a pissed-off hunchback who is prepared to defend his turf with stones and pots of boiling liquids.

It’s a good story, even if it doesn’t stick that closely to the book. In the book, pretty much everybody dies…so spoiler alert, I guess. C’mon—it’s close to 200 years old. You had your chance. I don’t know if there is a cinematic version of the story that actually does stick to the real ending. In any case, this one goes further afield than the silent version (from what I gather) but not nearly so far afield as Disney’s.

There’s plenty to like here on the surface. The performances (with one exception) are fine all the way through. Maureen O’Hara’s job is to look beautiful, and she does. Cedric Hardwicke is supposed to be a bit menacing and prissy, and he his. Alan Marshal has to look dashing (he does), as does Edmond O’Brien, with the additional need of being sympathetic. He is. Thomas Mitchell has to be both funny and menacing, something he manages well because he’s Thomas Goddam Mitchell and he could handle any character role someone gave him.

But it’s Laughton who is not simply good. Laughton is magnificent. The man was always a good actor and I haven’t seen him in a film yet where I didn’t think he was worth watching, but here, Laughton is probably better than in anything I’ve seen him in, and I’ve liked him in everything I’ve seen. Quasimodo, while misshapen, is not the figure of pity he easily could have become. He’s also not comic except in the moments where we are laughing with him instead of at him. Like Boris Karloff’s turn as Frankenstein’s Monster, Laughton’s great achievement here is to make Quasimodo completely sympathetic despite his appearances.

This isn’t a perfect version of the story by any stretch, but Charles Laughton is perfect in the role, and that makes it worth watching. The rest is pretty scenery that’s nice to have but ultimately falls short of a truly grand actor taking a great role by the teeth and hanging on for dear life.

Why to watch The Hunchback of Notre Dame: Charles Laughton.
Why not to watch: It plays hard with the original story, and not in the best way.