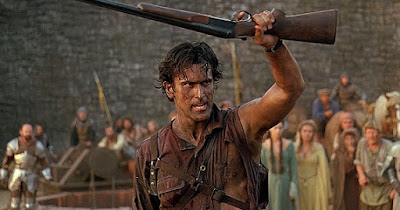 The Evil Dead trilogy is much beloved by horror fans. There are plenty who would put Army of Darkness at the top of their list of the three. That’s not the case for me. While it is absolutely the easiest of the three to watch, it’s also my least favorite of the three. Now, before you go storming off into the comments to tell me how wrong I am (and yes, you’re still welcome to do that), rest assured that I love all three. On Letterboxd, my reviews for the three films are Evil Dead, 4.5 stars; Evil Dead 2, 4.5 stars; and Army of Darkness, 4 stars. When I say I think it’s the least of the three, we’re not talking a massive drop off.

Honestly, having just rewatched the film, it’s kind of odd that my rating for it is that high. Army of Darkness has serious problems of a technical nature. There’s some truly terrible rear projection work in a lot of places and while the stop-motion and puppet work is impressive, it’s also really obvious in many cases. It’s sort of the curse of having a bigger budget. Army of Darkness had a budget about three times larger than Raimi had for Evil Dead 2, which meant he attempted a lot more, and not all of it worked as well as it could have.

What Army of Darkness has going for it more than the first two films in the trilogy is that it clearly doesn’t take itself seriously. Sure, it’s got a plot that actually works, but Raimi is very much making a slapstick movie in the guise of one with monsters. Virtually everything is played for comedy, and there are numerous nods to The Three Stooges throughout. It’s not really trying to scare anyone, and so it generally doesn’t.

Our hero, Ash (Bruce Campbell), has been sent back in time by whatever happened at the end of Evil Dead 2. He finds himself roughly 500 years in the past and suddenly captured by a man named Arthur (Marcus Gilbert) and his various knights and minions. While Arthur’s wise man (Ian Abercrombie) counsels that Ash might be the savoir foretold of, Arthur decides that he is a minion of Henry the Red (Richard Grove), whom he has recently captured. And so Ash is dragged back to the castle in chains to be executed.

Thrown into a pit of monsters, Ash fights his way out, and suddenly, he’s the man of the hour. The medieval folks need him to retrieve the Necronomicon, the book that has plagued Ash for two movies. Along the way, Ash is confronted by an evil version of himself and his own incompetence at retrieving the book. Now the army of the dead, led by his doppelganger, are on their way to claim the book, and they’re bringing Sheila (Embeth Davidtz), Ash’s love interest along to bring about an age of undead monsters upon the earth.

Here’s the thing: there are a lot of things that don’t work with Army of Darkness. It’s almost impossible to watch without seeing just how terrible the rear projection work is, because it is some of the most amateurish work of the last 50 years. The skeleton army looks cool until it starts moving, and then it becomes something that wants to be Harryhausen and can’t quite get there. It’s too short (81 minutes including a substantial credit sequence) and large parts of the plot simply don’t make any sense. And the truth is that I genuinely don’t care.

Army of Darkness is fun. It’s funny and silly and stupid in all of the best ways. It’s so clearly a labor of love from everyone involved that it’s impossible not to at least like it on some level. Bruce Campbell gets tremendous one-liners throughout, and even if the rest of the movie were terrible, he is an absolute joy to watch.

One of the great conceits of this movie is that it plays up on the essential idiocy of Ash as a character. In Evil Dead, Ash just needed to survive. In Evil Dead 2, we get a little bit more of him and learn that he can kick a little ass in a pinch when he needs to. This is the apotheosis of Ash as a character, where he becomes something almost like Buster Keaton. Ash is completely incompetent in everything except when it comes to kicking ass. Once his life is threatened, he’s an unstoppable machine of undead carnage, and it’s wonderful to behold.

I also love that Raimi managed to entice Bridget Fonda for a tiny cameo as Ash’s girlfriend in the flashback that opens the film. She has no lines (just a scream), but it’s so much fun to see someone recognizable in a bit part.

I could easily understand someone who didn’t know the lore of the trilogy watching this and wondering what all the fuss is about. Seriously, there’s a part of me that thinks the same thing. However, for any fan of the first two movies, there is something in Army of Darkness that forgives all of its sins and focuses instead on the pure joy that the movie truly is. Yes, it’s goofy and silly. Yes, it has so many problems that could have been fixed with a much larger budget or dealt with creatively with a much smaller one. And none of it matters because Army of Darkness is deliriously funny and ridiculous in all of the best ways.

Why to watch Army of Darkness: It’s gloriously fun.
Why not to watch: Plot holes abound, although you won’t really care. The terrible special effects, though…