Wednesday Horror: Night of the Creeps

Film: Night of the Creeps
Format: DVD from NetFlix on laptop. 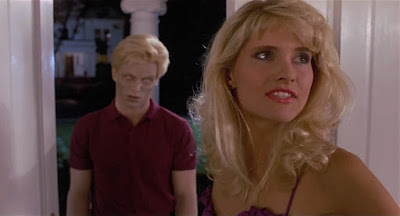 When a genre gets to a certain point, a lot of tropes develop for it. There are clichés that are going to work their way into genre films that are hard to avoid. There’s a reason, for instance, that movie funerals so often happen in the rain, or that the minute a guy in a war movie shows the rest of the platoon a picture of his sweetheart, he’s pretty much got a target on himself. Eventually, someone is going to create a film in that genre that attempts to use all of the clichés. Horror is no different in this respect, and Night of the Creeps is that movie.

We start in the 1950s, and oddly, we start on an alien spacecraft. One creature holding a canister is running away from others. Our first alien eventually blasts the canister out an airlock and it eventually comes to rest on Earth. Meanwhile, down on Earth, a lunatic has escaped an asylum after hacking apart four guards with a fire axe. A pair of young lovers from a local college finds both the canister and the lunatic at around the same time. The lunatic kills the girl, while the young man is attacked by something that emerges from the container.

Now we find ourselves in 1986, the film’s present day. Chris (Jason Lively) and his disabled friend J.C. (Steve Marshall) are attending that same college when Chris spies Cynthia (Jill Whitlow) across the lawn at a fraternity party. He’s immediately smitten with her, but forces J.C., who is clearly the funny and quick-witted one of the pair to make the approach for him. Eventually, Chris decides that the only way to get her to notice him is to attempt to join the fraternity in question, something he undertakes and demands J.C. do with him. He’s also blissfully unaware that Cynthia appears to be attached to frat member Brad (Allan Kayser).

Well, the frat boys don’t take our heroes seriously, but suggest that a way to get in good with them would be to sneak into the college’s medical lab, steal a cadaver, and lay it at the doorstep of another fraternity. Our boys go off to do just this and discover the young lover from the opening scene in cryogenic stasis. Naturally they open up the pod to retrieve the body, when it suddenly starts to come to life. They run, but a grad student (David Paymer!) is attacked by the corpsesicle.

Long story short (too late), the corpse was infected by mind-controlling slug critters. They get inside the brain, gestate, and then burst out while controlling the body until it collapses. With bodies starting to appear around campus, veteran cop Ray Cameron (Tom Atkins) is called to the scene. It is revealed that Ray’s long-ago ex was the girl murdered by the ax-wielding maniac and that he’s been embittered ever since. Eventually, everyone figures out what is going on, and shotguns, flamethrowers, and even a lawnmower are called into service.

First of all, it’s clear that there is a great deal of love for this movie in the horror community. The space slugs that enter the victim through the mouth are clearly referenced in Slither, for instance. Also, like Slither, Night of the Creeps makes good use of the names of other horror icons as an inside jokes. Characters have last names like Raimi and Romero, and the college where the movie takes place is named after Roger Corman. Chris uses a lawnmower to dispatch one of the zombies, something that Peter Jackson amped up to 11 in Dead Alive. Just as the makers of this film wanted to demonstrate their love for the genre, the genre itself has responded, not simply by continuing to use the tropes that are more firmly established here, but by taking the ideas from Night of the Creeps and putting them in their own movies.

It’s a hard film not to like in a lot of ways. There are a couple of points of pain here, but nothing really serious. Because the movie really does attempt to use every possible cliché it can think of, there aren’t a lot of places new for it to go. Everything from the way the plague hits, to who it hits, and to the “surprise” ending are straight out of the genre. Second, and perhaps more serious for the film, Jason Lively is not the kind of guy you’d want to hang your zombie defense plan on. He can’t really pull off the role of horror movie hero.

But these are minor details for a film that is clearly having a great time exploiting the expectations of its audience and mining the films that came before it for everything it can. It’s also worth a shout-out that one of the main characters is a guy who walks with crutches and nothing really is made of this. He’s not the “crutch guy,” but a legitimate character in his own right. It’s a subtle difference, but there is a real difference between J.C. being a disabled guy and a guy who happens to be disabled. Night of the Creeps goes for the latter, and it works.

If you like the genre, you’ve likely seen this. If you haven’t, I can’t imagine not enjoying it and you should hunt it down soon.

Why to watch Night of the Creeps: It’s everything you expect in a mid-80s horror film.
Why not to watch: You’ve been here before in almost every scene.