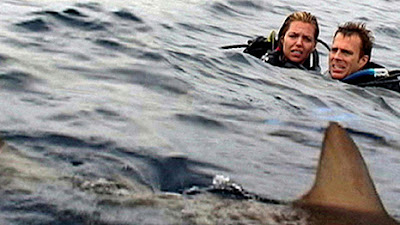 It takes a certain kind of balls to make a shark movie these days. I get it, but it’s a massive risk. The minute you put people in the water and have sharks in the area, you’re going to be compared with Jaws on some level. Let’s be honest: most movies are not going to compare well with Jaws in general, and even a good shark movie is going to pale in comparison. When it comes to the sharks, Open Water is a bit of a bait and switch. There are sharks here, but they’re just a small part of the total story.

Prepare for a bit of a slow open. Susan Watkins (Blanchard Ryan) and Daniel Kintner (Daniel Travis) have busy lives and demanding jobs, which means they don’t get to spend a great deal of time together. Hoping to improve their relationship, the pair takes a vacation to the Caribbean to go scuba diving. Thanks to the magic of movies, the two are quickly on an island and then on a dive boat heading out to deep water. Rather than staying with the group, the two go off on their own. Thanks to a mix-up involving another passenger, the count of divers gets mixed up and Daniel and Susan are left behind in the open ocean.

That’s really it. We’re left with our hapless pair in, well, open water about half an hour into the film and will spend about 50 minutes watching them figure out what to do. This is less obvious than you might think at first. The natural thought is to simply start swimming, which is what Susan wants to do. The problem, one that isn’t immediately obvious, is that they literally don’t know where they are. There’s no land visible, and picking a direction and swimming might be taking them further out to sea. Worse, there are currents that are already taking them away from where they surfaced, and with the boat gone, they have no idea where to go.

What happens between the two characters is probably predictable. They cling together desperately, and slowly start to bicker with each other and blame each other for their predicament. Beneath the water, the two are investigated by various sea creatures, some of which start to nibble at them, small bites that seem to be ignored by our hapless divers because of the tightness of their diving suits and the temperature of the water. Things get more serious when they drift into a school of jellyfish and get a few stings. As they continue to drift in the current, they eventually draw the attention of a school of sharks who start “investigating” our two swimmers.

For a movie that sells itself as a shark attack film, there’s not a lot of shark attacking and pretty much no gore. There’s a little, but nothing incredibly disturbing. Like I said at the top, it’s a bit of a bait and switch. Watch the trailer, look at the poster or the DVD case. We’re led to believe that there’s going to be a straight-up feeding frenzy and instead, it’s half an hour or so of set up and slightly less than an hour of two people bobbing up and down in the ocean.

Open Water has exactly the problems you’d expect it to have. There’s not a great deal of plot here. There’s a scenario and a couple of people plunked into it. The characters are entirely flat. What do we really know (or care) about them? We know they’re experienced enough divers that they have scuba certifications. We learn that Daniel seems to know more about scuba in general than Susan does. We know that both of them have high pressure jobs that have forced them to take this vacation because it was the only time and location they could arrange. We learn over time that Daniel watches a lot of television and remembers a few survival tactics. But beyond these, we know nothing aside from the fact that these characters aren’t that bright. Susan, an adult woman with a real job and with a scuba certification, has to be told that she shouldn’t drink ocean water.

More or less, Open Water is the story of watching two people slowly die from a variety of causes. To its credit, it doesn’t overstay its welcome. The movie runs about 79 minutes, and I can’t really imagine it going much longer than that. I think there’s also an attempt to make this as real as it can be. This includes, though, some of the most completely gratuitous nudity I’ve seen in recent days. I think it could be argued that that was for realism, but it was entirely unnecessary.

Open Water isn’t bad, but it’s also not what it claims to be. That’s a little disappointing, and no matter how good the movie, it’s not going to get a pass when it promises one thing and delivers something very different.

Why to watch Open Water: People v. nature is always at least a little compelling.
Why not to watch: It doesn’t have a plot; it has a situation.