Film: Angels Over Broadway
Format: DVD from NetFlix on laptop. 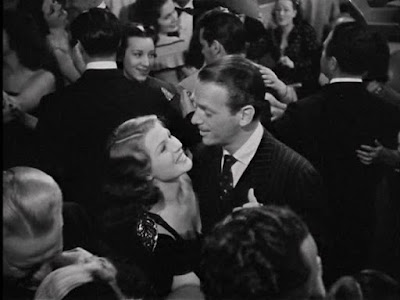 I went into Angels Over Broadway completely cold. Based on the title alone, I guessed that this would be a bog-standard Hollywood musical from the 1940s with a few upbeat songs, a romance that goes haywire until it ends up the way we expect, and a couple of dance numbers. That could not be more wrong. Angels Over Broadway is a film that desperately wants to be a film noir. It has almost all of the elements of a classic noir, but it also desperately wants to be a film that has the sort of ending we expect in a classic Hollywood film. It’s so close, though, it’s almost a little sad that it can’t quite get there.

What’s interesting about Angels Over Broadway is that it seems like a very early version of a more modern concept in film. We have four individual stories, or at least four very different characters, who come together by chance to give us the story. Aside from its length (it runs a mere 79 minutes), it feels a little Robert Altman-esque in that regard.

Bill O’Brien (Douglas Fairbanks Jr.) is a hustler and a conman who often makes money by leading stooges and hicks to a poker game run by mobster Dutch Enright (Ralph Theodore). On the night our film takes place, he thinks he’s found the perfect patsy for his little scheme: Charles Engle (John Qualen). What Bill doesn’t know is that Engle isn’t a hick, but a local New Yorker who is down on his luck. His high-maintenance wife has commanded him to embezzle $3,000 from his partner (George Watts), and the partner has just discovered the deed and given him until 6:00 the following morning to return the money or suffer the consequences. In response, Charlie has written out a suicide note and plans to do himself in. He chickens out at one point and ends up in the club where Bill is hanging out.

Also in the club is Gene Gibbons (Thomas Mitchell), a well-known playwright who has written three consecutive flops. Gene is separated from his wife, dumped by his girlfriend, and drinking himself into oblivion. When he leaves the club, he is given Charlie’s coat by mistake, and he finds the suicide note. Suddenly intrigued and thinking there might be a play in the offing, he hunts the man down to hear his story. Meanwhile, Bill is trying to figure out how to get Charlie to the poker game, and he wrangles Nina Barona (Rita Hayworth), one of the showgirls, to help him out, promising her a part of his cut.

Eventually, Bill figures out that despite his throwing money around because he no longer cares, Charlie is broke and desperate. Gene decides that he can “write” Charlie a better ending, and soon enough a plan is hatched to get Charlie to the poker game. The idea is that Charlie will more or less be given a few good hands to get him to start betting bigger and bigger sums on hands, and he’ll eventually be taken to the cleaners. However, once Bill gets him into the game, he’ll make his money (with Bill getting anything over the $3,000 needed) and come up with an excuse to leave the table for a minute, then run like hell with his winnings and pay back his partner.

Through all of this, Bill is trying to figure out how to make all of this benefit him in some way. He’s also attempting to fight off an attraction to Nina, and tends to do so by constantly insulting her, something she takes with poor grace. If you think this means that this is your romantic pairing for the film, you’d be right. After all, there always had to be a romance of some sort in every movie, and Nina is the closest thing we’re going to get a femme fatale here.

Angels Over Broadway is tonally all over the map. It desperately wants to be a film noir even though no one had coined the term at this point. It has a lot in common with that style of film—the underworld characters, the connection to crime, the hard luck stories—but it doesn’t really want to go all the way there, so it doesn’t. It also kind of wants to be a comedy. It is in the classical Greek sense of everyone starting at a low point and ending on a high point, but it’s also not particularly funny. Thomas Mitchell is the closest we get to a comic character, and he’s as good as he always is in the role, but even the comedy we get from him is heavily tinted with tragedy, failure, and booze. That’s perfect noir stuff, but he’s going to get the upbeat ending as well.

The truth is that Angels Over Broadway isn’t a bad film, but it’s not quite sure what it wants to be. It’s like someone playing at noir, wanting to capitalize on the dark shadows and darker themes, but being unwilling to really commit. There’s great potential here, but that potential gets squandered in the pursuit of happy endings all around. And even here, it kind of fails, but to talk about that, I need the rare spoiler tag.

*** ANGELS, COME FORTH *** Charlie Engel gets his $3,000 and presumably stays out of jail, but we discover that his wife is stepping out on him. It seems unlikely that she’s going to change her ways, and it’s also likely that Charlie’s partner is going to get rid of him, putting Charlie another bad decision or two from starring in another noir. Gene ends up going back to his wife, but he does so having completely forgotten about the plot he was writing with Charlie Engel in the main role, which means that his career is still probably stagnant and he’ll still keep hitting the bottle. Sure, Bill and Nina end up as a couple, but it’s also likely that Dutch Enright’s goons are out for blood and Bill has now lost one of the main sources of his income.

What this film really needed was another 15 minutes added to the end. We need to see what happens in the next day to our four main characters, because the chances are good that they won’t be in the same happy position they are when the credits roll. Give us that extra time, make this a real noir, and we might have something. As it stands, it’s not a lot more than a curiosity.

Why to watch Angels Over Broadway: The plot is certainly interesting.
Why not to watch: It so wants to be a film noir and it just can’t get there.