Wednesday Horror: From Beyond

Film: From Beyond
Format: DVD from NetFlix on laptop. 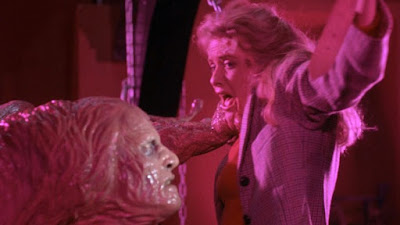 Some actors have a particular milieu in which he or she is either particularly known or particularly effective. For Jeffrey Combs, that appears to be movies based on H.P. Lovecraft stories. I should be fair here, because that also seems to be the case for Barbara Crampton, who is in at least three Lovecraft-inspired films with Combs. From Beyond is yet another of these, directed by Stuart Gordon and produced by Brian Yuzna. It’s like old home week for the Elder Gods.

From Beyond is based loosely on the Lovecraft story of the same name. The movie alters the story in significant ways, particularly with the addition of a new villainous character to allow Combs to play something like the hero. Dr. Edward Pretorius (Ted Sorel) is the classic mad scientist. He has created a new, massive device that is designed to stimulate the pineal gland of anyone who stands in its field of influence. His assistant, Crawford Tillinghast (Jeffrey Combs), turns on the machine one night and discovers that it works, at least in one sense. While the machine is active, spectral beings appear and attack him. Crawford turns off the machine and talks to his boss/mentor.

Naturally, Pretorius (who I’m convinced is named after Dr. Pretorius from Bride of Frankenstein) turns the machine back on. While it’s running, the critters reappear and a big nasty appears and bites off the doctor’s head. Crawford damages the machine enough to get it to stop working, and is soon arrested for the murder of Dr. Pretorius. He is diagnosed as a paranoid schizophrenic by Dr. Bloch (Carolyn Purdy-Gordon, wife of director Stuart Gordon). Enter Dr. Katherine McMichaels (Barbara Crampton), who, after a quick conversation and CAT scan of Crawford Tillinghast, determines that his pineal gland has actually grown, meaning that she wants to turn the machine back on. Since Crawford is still a murder suspect, she is attended in this by the main investigator in Pretorius’s death, Detective “Bubba” Brownlee (Ken Foree).

Of course the machine still works, and it turns out that Pretorius is still alive, just on the “other side” now. It’s here that we discover Dr. Edward Pretorius was a sexual sadist and frequently brought women to the house where the experiment was taking place so that he could beat them. After their encounter with the still-alive-but-now-physically-mutated Pretorius, things in the house change slightly. See, according to Dr. McMichaels, the stimulated pineal gland may allow people to see things in this other spectrum. It may also ramp up people’s sex drive, which is what we’re given to explain Katherine’s sudden desire to wear fetish gear and seduce both of her new housemates. Eventually we learn that Pretorius can control the machine “from beyond,” and is thus trying to return to the normal world and engage in various horrible acts for his own gratification—acts that appear to have some sexual nature for him but involve devouring his victim. And, since he’s spent so much time in the field having his pineal gland stimulated, Crawford now has the ability to see on that spectrum, which happens when his pineal gland literally emerges from the front of his head on a retractable stalk.

So, yeah. That’s what happens here.

I’m not going to pull punches here: From Beyond is ridiculous and fun. It’s funny-gross in the way that plenty of movies from this era are. The gross stuff that happens is only gross in the sense that there’s a lot of blood and weird effects. For instance, we see someone attack another person, bite out that person’s eye and then suck brains through the empty socket. It’s disgusting to think about, of course, but so purely and awesomely fake that it’s tremendously fun to see.

I also love the fact that there is absolutely no reason for Barbara Crampton’s character to suddenly develop a serious interest in fetish gear, and yet that’s what happens. Barbara Crampton spends at least some of the movie walking around in a g-string and a leather harness simply because. It’s awfully convenient that the sex gear that Pretorius had fits her perfectly, too.

It’s all so completely ridiculous and over-the-top that it’s impossible not to be a little bit in awe of it. If I have a complaint here, it’s that not all of the effects hold up. A bunch of the practical effects are actually quite good. Seeing Jeffrey Combs walking around with his pineal gland sticking out of the middle of his forehead is great, even if there are moments when the rig the poor guy is wearing distorts his head so completely that it becomes obvious. There are some stop-motion effects and video effects that simply don’t hold up, though, and that’s a little bit of a shame. For all of the fun of this movie, it looks 30 years old because, of course, it is 30 years old.

That’s all okay, though. Combs is great in movies like this because he seems to take it so seriously. The same is true of Barbara Crampton. It’s also great seeing Ken Foree again. I enjoyed the hell out of this and would happily watch it again.

Why to watch From Beyond: Jeffrey Combs is your sign of Lovecraft-y goodness.
Why not to watch: The effects don’t really hold up.

Email ThisBlogThis!Share to TwitterShare to FacebookShare to Pinterest
Labels: From Beyond, horror, science fiction, Stuart Gordon