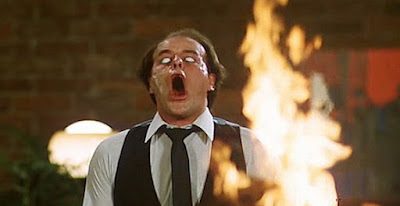 Scanners, which contains an early scene in which a man’s head literally explodes, has one of the most-paused film moments from the entire decade of the ‘80s. It ranks somewhere up in the neighborhood of Phoebe Cates removing her bikini top in Fast Times at Ridgemont High, although clearly for different reasons.

The high concept of Scanners is that there are people who have the ability to “link up” their own nervous system with those of other people. These “scanners” are people who are often pushed to the fringes of society because they don’t really have the ability to control this “gift,” and thus are almost always assaulted by the thoughts of other people. This is certainly the case with Cameron Vale (Stephen Lack), who encounters some prejudice in a mall food court since he looks like a derelict. The woman making these comments soon suffers an attack that looks like an aneurysm, and Cameron is quickly hunted down and tranquilized by a gang of what seem to be quasi-government agents.

However, this is not the case. The real identity of Cameron’s captors are people at ConSec, a security company working on weaponizing people with the scanner ability. It’s at a sort of press conference when we get the head exploding bit. ConSec is going public with the scanners, and a volunteer from the audience turns out to be a man named Darryl Revok (Michael Ironside), who is himself an even more powerful scanner. When ConSec tries to pacify Revok, he instead kills all of his captors and escapes.

Confused yet? There’s no need to be, because all that is going on is soon explained by the kindly scanner expert, Dr. Paul Ruth (Patrick McGoohan, who is as suitably weird in this as he ever was). Dr. Ruth (and yes, it’s funny for me to type that) informs Cameron that Darryl Revok is actually the head of his own group of scanners that is looking to shut down ConSec and carry out more or less terrorist operations to take control of the country. After all, these people are telepathic, telekinetic, can control the actions of other people, and can literally make other people’s heads explode.

The upshot of all of this is that Ruth wants Cameron to go undercover and infiltrate Darryl Revok’s organization. Along the way he discovers a group of peaceful scanners who essentially meditate themselves into massive and literal group thinks. This collection is headed by Kim Obrist (Jennifer O’Neill). Revok, though, wants to eliminate any potential threats from scanners not affiliated with him, which means that everyone in this fringe group that isn’t Cameron or Kim is going to get whacked. Ultimately, we learn what Revok’s plan is. A drug called Ephemerol has been placed on the market and has been prescribed multiple times to pregnant women. While most of the scanners care about ephemerol because it temporarily stops the voices of other people in their heads, it also serves to create new scanners in utero. This is Revok’s plan: create an army of scanners to take over the country and mold it in his own image.

How I view Scanners is difficult in an important sense. I think it’s impossible to be a horror fan who grew up in the ‘80s and not love Scanners at least a little bit. It does have its problems, though. It’s very trope-filled, for starters. There are certain characters that you know aren’t going to make it through to the end. That Revok has a spy in the ConSec organization is hardly a surprise, too. The various beats of the film are pretty standard, and nothing really happens unexpectedly.

A larger problem is how quickly the plot moves. Cameron is taken in to ConSec, and suddenly he has full control over his scanner abilities and has become fully indoctrinated into ConSec’s plan. What feels like something that should take place over multiple months or a year seems to happen in a couple of days or a long weekend. It goes too fast to fill in all of the details of the plot that are necessary to make it work.

I like Scanners almost in spite of itself. While it does fall prey to many of the tropes of the genre and standard plot elements, I almost feel like it’s early enough that he helped establish some of those tropes and plot elements. It could be argued that it doesn’t really have time to go through all of the establishing of the scanners and all of the background in any form better than it already does. The film is already long for the genre at nearly 1:45, and it could be just as easily argued that it doesn’t really have the need to get any more involved that it already has. After all, what we’re really here for is watching people get mind controlled and having their heads blow up.

So, Scanners is worth your time for all of the problems it might have. If nothing else, I don’t know that you can fully understand science fiction and horror as a film genre without seeing it at least once, and without freeze-framing it on the exploding head at least for a few seconds.

Why to watch Scanners: How often do you get to watch people commit murder with their mind?
Why not to watch: It moves from its premise to its conclusion very quickly.

Posted by SJHoneywell at 7:25 AM