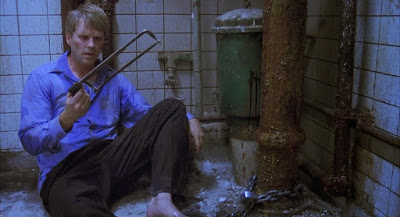 I’m probably one of the last horror fans to watch Saw. Out of respect to those reading this, I’ll get all of the puns out of the way. Before this, I hadn’t seen Saw, but now I have seen Saw. Yes, I saw Saw. The next time I see Saw it will be the second time I’ve seen Saw. If someone asks me if I’d like to see Saw I can say that I saw Saw. Sorry for that.

The chances are very good that you’ve already seen this, which means I don’t need a great deal of plot breakdown. I’ll make this quick, something aided greatly by the fact that Saw doesn’t have a huge plot. Two men, photographer Adam (Leigh Whannell) and surgeon Dr. Lawrence Gordon (Cary Elwes) wake up in a large, filthy bathroom. They are each chained by an ankle to a pipe on opposite sides of the room. Between them is a corpse holding a microcassette recorder and a pistol.

Both Adam and Lawrence are the newest victims of Jigsaw, a killer who, rather than outright killing his victims, puts them in terrible situations and makes them undergo terrible events to prove they still have a right to be alive. Adam retrieves the tape player and is told to leave the bathroom by any means available. Lawrence is told that his wife and daughter have been abducted; if he doesn’t kill Adam by 6:00, they will be killed and he will be left in the room to die. It sets up an interesting situation where the two need to help each other, but are simultaneously working against each other. Only one of them is going to get out alive.

Saw is filled with a number of flashbacks to the lives of the two men. Lawrence in particular has some past with Jigsaw, since he was a suspect months earlier. A penlight bearing his fingerprints was found at the scene of one of the deaths. The two explore the room as best they can, with Adam discovering a pair of hacksaws in a toilet tank near him. He tosses one across to Lawrence, but Adam’s breaks on the chain. This is when Lawrence realizes that they were never intended to cut through the chains, but instead to cut through their ankles. Toss in an obsessed police detective (Danny Glover) and you have the makings of a very twisted thriller.

It’s a great set up for a film; it’s a twisted morality tale that offers a bloody and brutal, but ultimately affirming message. Life is a gift and many of us seem to take that gift as a given or as something that doesn’t have much value. The lesson of Jigsaw is that life is worth fighting for, even worth killing for. We tend to live our lives as if they are going to go on forever, but they aren’t; they are ticking away one second at a time all the time. Every moment I spend blogging and you spend reading, our lives are ticking down. What are we doing to make that time count?

It’s a sobering thought, and one doesn’t typically expect that sort of profound insight from a film that trades on horrible traps and people pressed into wicked, twisted games of life and death. It wouldn’t be a shock to me if a lot of people who watched this didn’t expect a life lesson from it, going in with the hopes of some gore and a few quality kills. Honestly, that’s pretty much what I expected from it. Saw has the benefit of being a little smarter than that, or at least being made in a way that allows for the viewer to interpret it in this fashion. Saw certainly doesn’t shy away from the traditional horror movie joys, but there’s more behind it, and that’s pretty interesting.

Did I like this? I did. I get why it went on to spawn a huge franchise. From what I’ve heard, the films that follow it slowly deteriorate in quality as they amp up the nasty bits and traps. I guess that’s to be expected, but it’s nice to know that it started from a solid position of mixing actual horror that works mentally on the viewer and such an interesting place philosophically.

With that said, there are some problems with the way the story works. Without going into spoiler territory, I’ll just say that there are too many variables that have to work perfectly for Jigsaw’s plan to work at all. There’s too much plot-driven action and not enough character-driven action. I can forgive it for a film like this, but I do have to say that it’s there.

Why to watch Saw: A very interesting moral tale/life lesson.
Why not to watch: It’s one of those “crazy plots where everything has to work perfectly for everything to work at all” movies.