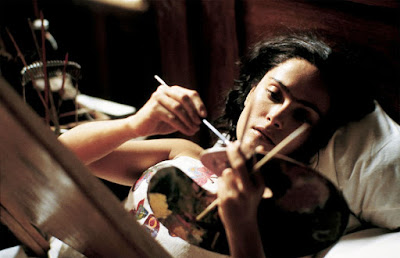 Dell over at Dell on Movies is hosting his third annual Girl Week, featuring only movies that have female protagonists. I don’t do a lot of blogathons. It’s not because I don’t want to, but because I don’t generally have a way to fit them into my normal posting schedule. In this case, though, all I needed was a film with a female protagonist. That’s not hard, and it just so happened that Frida was sitting on my desk.

Frida is the biopic of surrealist artist Frida Kahlo, most famous for endless self-portraits and her unibrow. As is often the case, I went into this knowing very little. I knew that Salma Hayek was nominated for Best Actress for the role. I knew Kahlo was a painter, and pretty much that’s where my knowledge stopped.

Frida is much more a highlight reel than it is a biopic. We’re going to get significant events from her life, which ended up being disturbingly short. When she was a high school student, she was involved in a horrifying accident that nearly killed her and almost left her bedridden for the rest of her life. She struggled through nonetheless, and thanks to her father, also a painter, she takes up painting while she convalesces.

Kahlo’s politics greatly influence her painting as well. She eventually pairs up with mural artist Diego Rivera (Alfred Molina) first as a team and eventually as a married couple. When they are married, Diego tells her that he will be loyal to her, but not faithful. This is a fact that Frida takes to heart, and is similarly loyal to and not faithful to Diego. That Frida takes lovers of both genders is not glossed over here, nor is it sensationalized.

However, despite this more or less tacit agreement that the marriage is one of the mind and about the art rather than about sex, it’s still a rocky one. Diego is not merely unfaithful, he is frequently unfaithful, eventually with Frida’s sister Cristina (Mia Maestro), which proves to be the breaking point for her. The breaking point for him is when Frida has a brief affair with Russian communist and asylum-seeker Leon Trotsky (Geoffrey Rush).

The politics play into this quite a bit, in truth. Both Frida and Diego are communists, and much of that ideology comes through in their work. When Diego is commissioned by Nelson Rockefeller (Edward Norton) to paint a mural, it becomes a sort of Communist Manifesto with Vladimir Lenin at its center. Frida’s tryst with Trotsky happens because Diego has convinced the Mexican government to offer asylum since no other place in the world will take him.

There are a few noteworthy things about Frida. I’ve gotten to this point without mentioning the wonderful Valeria Golino, who plays Diego’s first wife Lupe Marin or the brief cameo from Antonio Banderas as David Alfaro Siqueiros. I’ve also not mentioned the great Roger Rees as Frida’s father Guillermo. They’re both great in small roles, but the movie is absolutely dominated by both Hayek and Molina.

I’d be lying if I didn’t admit to loving Alfred Molina in pretty much everything I’ve seen him in. Molina plays whatever role he is given to its hilt, equally comfortable as an everyman, a tempestuous painter, or as a raving supervillain. His work here is good and honest, playing a flawed man who has ideals he sticks to and ideals that he simply can’t live up to.

But it’s Hayek who deservedly takes center stage. I’ve always liked Salma Hayek, and here she demonstrates exactly why she is deserving of attention. Hayek plays Frida from her late teen years through to her death and always looks the part. She takes on the role with passion and fire, something that is absolutely needed for playing a woman who was so willing to fiercely embrace the life that she was given despite the continued pain from her accident, pain that plagued her every day.

I’m also going to say something that gets said a lot but doesn’t get said enough: Oscar needs to start taking a much more serious look at women in the director’s chair. Julie Taymor’s work here is bold and exciting. Scenes start as paintings and become live action. Frida’s fever dream after her accident is played by Dia de los Muertos pupeets. Frida’s and Diego’s time in New York is a unique montage of partly colored images and photography. It is constantly beautiful to look at and frequently surprising in the best of ways. It is visionary in the way that a great film should be and that so few films are.

The biggest problem with the film is that it feels choppy. Taymor does her best to keep the audience connected to the narrative and both Hayek and Molina make heroic efforts to keep us in tune with the personalities they are portraying, but the film still jumps through time very quickly with little there to ground us in how much time is passing from point to point.

Still, it’s pretty great, and so is the art.

Why to watch Frida: It is one of the most ferociously-directed films of its time.
Why not to watch: It plays more like a highlight reel than a biography.