The Ocean is Pretty Mean, Too 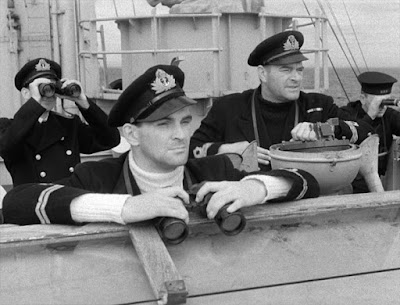 While my current genres of choice are science fiction and horror, I grew up on war movies. When I was a kid, I’d watch just about any movie based on a World War II plot that came across the television. I still like a good war movie, and I’d heard some about The Cruel Sea but couldn’t find it. I finally bit the bullet and bought a copy off eBay. I’ve tried to spend as little as possible on this blog, but after this many years, I figured I could spare a few bucks for a movie I really wanted to see.

The Cruel Sea is, as the name would suggest, a naval film. In this case, we’re focused on the battle for the Atlantic in World War II, and specifically the war against the German U-boat fleet. Interestingly, we’re not going to be spending time on battleships or destroyers, but on convoy escorts. Lieutenant-Commander George Ericson (Jack Hawkins), who has had a career in the Merchant Navy has been commandeered into the Royal Navy and placed in charge of a new Flower-class corvette named HMS Compass Rose. He’s given a green crew who have worked their way through training but have no combat experience. Soon on board are his officers Lockhart (Donald Sinden), Ferraby (John Stratton), and Bennett (Stanley Baker). It’s soon evident that Bennett is a martinet who demands respect that he doesn’t particularly deserve. Eventually, the crew is joined by Morell (Denholm Elliott), and their work escorting ships begins.

What we get is something like a slice of life at sea in a very difficult job and a constantly stressful situation. While the problems are initially the weather, eventually the U-boats become a serious issue once the German navy has taken over the ports along the coast of France. Constant alerts, depth charge battles, and rescuing of sailors from sunken ships follows. At one point, Ericson is forced into a terrible decision—sailing directly into a group of sailors to launch depth charges at a submarine knowing that it will likely kill the men in the water.

We do get a little of the personal lives of the men on board. When the film can spare the time, we learn about their home lives. But much of this happens within the context of the near-constant stress of war and combat. Even when combat isn’t happening directly, there is the continuous worry about submarine attacks and protecting the vulnerable convoy ships.

I found The Cruel Sea interesting in a number of respects. Since this was released in 1953, it’s clearly not a propaganda film. Because of this, it doesn’t try to whitewash the experiences of the men on the ship. These are men who are constantly on edge, haunted by the things they have seen. When HMS Compass Rose is torpedoed, Ericson gives the order to abandon ship with the screams of men dying below decks ringing in his ears. He eventually takes command of a larger ship, HMS Portchester Castle and tasked as the leader of an anti-submarine group, but still has flashbacks to those screams of dying men.

The parts of the film that deal with the men off the ship are in many ways the least interesting. It’s something of a requirement of films like this to give us something of the lives of the men on board the ship to help us know them, but even a film as long as this one (it clocks in at just over two hours) doesn’t tend to give us a great deal about any of them. We get little bits and pieces to help keep one man straight from another, but the movie does slow down in these places. The tension of the hunt against the U-boats is far more interesting.

What really works is something I first noticed in the film Twelve O’Clock High. In that film, men simply fail to return from bombing raids and their names are erased from the chalkboard. We get no elaborate death scenes, but something that is almost callous in its treatment of the men who don’t return. The same thing happens here when HMS Compass Rose sinks. Characters, some of them major characters to this point, simply die. We don’t see them die. They’re just not on the lifeboats.

The Cruel Sea does a lot right. While there are moments that appear to be clearly filmed on a soundstage in a large water tank, other scenes really look like the real thing. The movie uses stock footage of military ships in battle very effectively and almost seamlessly.

The truth is that if you aren’t a fan of war movies, The Cruel Sea isn’t going to convert you. If you are a fan of the genre, you’ll find a lot to like here. I certainly did.

Why to watch The Cruel Sea: Naval war movies are cool.
Why not to watch: The sections that deal with the non-war issues in the men’s lives aren’t as interesting.