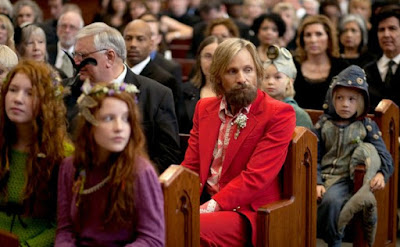 A few years ago, the documentary Surfwise showed up on the 1001 Movies list. If memory serves, it vanished the next year. The movie was about an unusual family in the sense of how the children were raised. They were almost feral, destitute, uneducated, and evidently fabulous surfers. Their parents had adopted a strange, communal lifestyle that emphasized the family over attaching themselves to society at large. It was my most common thought while watching Captain Fantastic, a film that concerns a family very similar in a lot of ways.

Ben Cash (Viggo Mortensen) lives in the forest in the Pacific Northwest with his six children. When I say they live in the forest, I mean that in a literal sense. They have shelters, but they hunt and scavenge food and Ben instructs them in both forestcraft and educates them on virtually every topic. It’s soon clear that the person missing is their mother. Ben and oldest son Bodevan (George MacKay) head to the closest point of civilization to more or less check in. It turns out that Ben’s wife Leslie (Trin Miller) has been hospitalized for bipolar disorder and has, the night before Ben calls in to family, killed herself.

Naturally, this sets up a coming conflict. Leslie’s father Jack (Frank Langella) believes that the lifestyle that Ben and Leslie chose for themselves and their children is what lead to Leslie’s suicide. He threatens Ben that if he shows up at Leslie’s funeral, Jack will have him arrested. Ben stews for about a day before deciding to continue to live up to the ideals that he has tried to instill in his children. Packing up the bus the family uses for transportation, Ben and the six kids head out of their plot of forest and proceed into civilization to make sure that their mother’s last wishes are properly carried out.

Captain Fantastic is a number of things at the same time. It’s clearly a fish-out-of-water comedy. The six kids—Bodevan, Kielyr (Samantha Isler), Vespyr (Annalise Basso), Rellian (Nicholas Hamilton), Zaja (Shree Crooks), and Nai (Charlie Shotwell) have had almost no contact with the world outside of their forest. For the younger children, this may well be their first trip to what the rest of us would call the normal world. It’s also a true drama. Ben’s ideas and ideals clash with almost everyone he meets, his family in particular. A visit to his sister (Kathryn Hahn) is relatively disastrous, and the family’s arrival at Leslie’s funeral is far worse.

There are a lot of things that work very well in Captain Fantastic. One clear success is that there really is no villain in the picture. The conflict between Ben and Jack in particular is not about good versus evil, no matter how the two of them might characterize it in their own minds. Both Ben and Jack seem to have the best interests of the six kids at heart but have vastly different opinions on what is the best for them. Spending the bulk of the film with Ben, it’s easy to see Jack as a bad guy, but he’s clearly not. It’s Ben who is very much at odds with what passes for civilization these days.

Viggo Mortensen is absolutely the central figure here, and this is the sort of film that, were he a younger man and not already a veteran of the Lord of the Rings movies, would be considered a star-making vehicle, at least in the world of Hollywood. It is a grand performance, one that solidifies Mortensen as one of the better actors working today. For all of his intelligence, Ben is a man who often does a great deal of thinking before acting, and all of that plays across Mortensen’s face. It’s a depth of character that isn’t that commonly seen.

The biggest drawback to the film is that virtually none of the other characters are developed that well. Of the kids, we learn the most about Bodevan because he is the oldest, has the most significant encounter outside of the family, and also has some aspirations of potentially going to college. The other kids are virtually interchangeable. Rellian is the angry kid, the one most likely to abandon the family for civilization. Kielyr and Vespyr are interchangeable from what I could tell, and Zaja and Nai are clearly different, but similar enough in appearance that I didn’t really bother to tell them apart.

I do want to call attention to Frank Langella. I genuinely like Frank Langella as an actor. There’s something about him that is oddly intimidating. The characters he plays are often severe in some way, and that’s absolutely the case here as well. Langella’s severity makes a great counterpoint to Mortensen’s different severity. They make great foils for each other here. It’s brilliant casting.

The takeaway here should be about Ben’s crisis of conscience. Is he really doing the right thing for his kids? Is there a way for these kids to truly function in the real world outside of the forest they live in? The takeaway that people will have, though, is about Ben’s parenting style itself. It’s simultaneously attractive and repellent, beautiful and terrible. It’s both insane and inspired, equal parts impressive and terrifying.

I liked this quite a bit. It gets the tone right all the way through, and that might be the most impressive thing about it.

Why to watch Captain Fantastic: Viggo Mortensen demonstrates that he’s a complete badass.
Why not to watch: You’ll be unable to decide if this life is idyllic or idiotic.

Posted by SJHoneywell at 9:20 PM