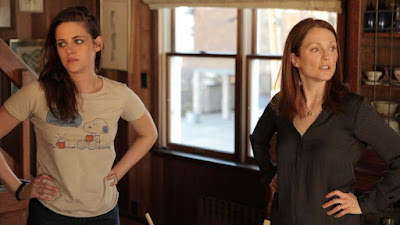 I’ve avoided Still Alice until now for a variety of reasons. The essential plot of Still Alice is the story of a woman with early-onset Alzheimer’s disease, and quite frankly Alzheimer’s terrifies me. There are a few things in the world that truly scare me beyond comprehension. The idea of having my mind slip away is absolutely one of them. If my mind is more or less the essential core of who I am, having that slowly deteriorate bit by bit, like waves lapping at a sand castle is almost incomprehensibly terrifying. Worse, our main character Alice (Julianne Moore) is diagnosed in the film at exactly the age I am right now. That she is also a linguist and a professor hits home, too.

The type of Alzheimer’s Alice has is genetic, and that hits home, too, although not mentally. We discovered a number of years ago that my father carries a genetic blood disorder called factor V Leiden that vastly increases the chances for blood clots. We discovered this when my dad had hip replacement surgery. The surgery went fine; the blood clot that followed almost killed him. He’s subsequently had blood clots in his lungs, although he’s still fine and surprisingly healthy for a man in his 80s. Finding out that there’s something in your body that you can’t do anything about and might kill you is a sobering moment. I’ve been checked—I don’t have it, although one of my brothers and one of my sisters does.

So I’m not going to mince words with this. It’s a soul-crusher. It’s also a film where the story behind it is just as tragic and heartbreaking as the story within the film. The book on which the film is based was written by Lisa Genova, a neuroscientist writing about her experience with her grandmother’s experience with the disease. The film was co-directed by married pair Wash Westmoreland and Richard Glatzer. Glatzer, who when the film was first pitched to him had just been diagnosed with ALS, was initially unwilling to take it on. By the time filming started, Glatzer’s condition had progressed to the point where speech was impossible for him and he communicated through a text to speech app on iPad. In essence, he was undergoing physically what Alice goes through mentally during the course of the film.

While the cast is good (we’ll get there in a moment), this is a film that starts and ends on the performance of Julianne Moore. Moore won the Oscar for this performance, and that’s worth talking about for a moment. There was very much a sense that this was Moore’s year—that she’d had enough nominations and enough losses that it was time for her to win an Oscar. Certainly the Academy has given out plenty of career Oscars in the guise of competitive ones. In this case, some might argue that is what happened. If it did, at the very least Moore won for a performance in which she is truly stellar (as she generally is).

Alice’s deterioration is rapid, going from being unable to think of a word to getting lost in on her own college campus when out for a run to not recognizing her own daughter who has acted in a play. Moore is intensely real through this, portraying the character as if she is herself losing moments of her own life and struggling to maintain and retain her own identity.

As for the rest of the cast, there are some stand-outs. Kate Bosworth and Shane McRae play Alice’s elder daughter Anna and her husband Charlie respectively. Hunter Parrish plays son Tom, and Alec Baldwin Alice’s husband John. It’s Kristen Stewart as youngest child Lydia who I find the most interesting here. Thanks to her roles in the Twilight films, Stewart has been frequently tagged as a bad, unemoting actress. It’s easy to forget how effective she can really be (Panic Room, Adventureland, and Into the Wild serving as examples). Is she expressionless here? At times, and yet it’s done with great effect, masking the fear and pain of watching her mother fade in front of her eyes. Aside from Moore, Stewart is the best thing in the film, offering a depth of performance that would be incomprehensible to anyone who associates her entirely with Twilight.

Of course Still Alice has its share of pathos. Discovering that her condition is genetic, she and John mention to their kids that there is a test available to see if they carry the trait, which is 100% indicative of whether or not they will experience this themselves. From them, we get three results. Anna carries the gene, Tom does not, and Lydia chooses not to find out. Perhaps because she doesn’t know her fate, it’s Lydia who is the most involved with Alice’s care and the one most involved with seeing how Alice is feeling and what her experience is like.

The truth is that Still Alice is a heartbreaking film, something that was virtually guaranteed by the story of the film. It is gently and artfully made, with new scenes starting in an out of focus shot that slowly comes into focus, representing Alice’s mental state and fading acuity. Glatzer and Westmoreland wisely stay out of the way in general, allowing the story to unfold and the characters to take center stage rather than the storytelling. It’s the right choice.

Did I like it? Kind of. I’m not sure Still Alice is the kind of film anyone really likes. It is very much an important film, though, and a very human one.

Why to watch Still Alice: You won’t find many better casts.
Why not to watch: It’s significantly depressing.