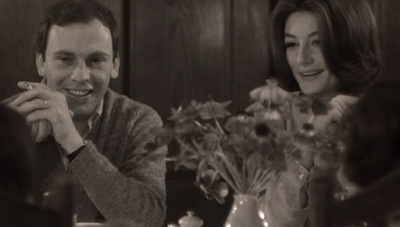 I had mixed feelings going into A Man and a Woman (Un Homme et une Femme in the original French) based on the almost nothing I knew about it. This is a film straight out of the heart of the French New Wave, and while I like some films that fit that profile, there are a lot that leave me pretty cold. On the other hand, the film stars Anouk Aimee and Jean-Louis Trintignant, both of whom I tend to like very much. Still, I can’t say that I was gung-ho to watch this. I got a copy through interlibrary loan and literally waited the three weeks until the film was due to watch it.

Having watched A Man and a Woman, I have to wonder why I waited so long. It’s probably that it’s pretty clear from the name of the film and from the cover of the DVD case that this is going to be a romance. I honestly have nothing against romances in general, except that I find that need to be in the right mood for them. That and there are a lot of very bad romances out there, films that are dead predictable or sappy, and I’m rarely in the mood for that. Still, since this movie is not available from NetFlix, and thus getting a copy of it is more difficult than just putting it at the top of the queue, I figured I’d better watch it to avoid the fine.

This is a romance, and like many of the romances I tend to like, it’s tinged with tragedy. Anne Gauthier (Anouk Aimee) is visiting her young daughter Francoise (Souad Amidou) at her boarding school one weekend where she meets Jean-Louis Duroc (Jean-Louis Trintignant), who is at the same school visiting his son Antoine (Antoine Sire). Anne has missed the train back to Paris, so Jean-Louis offers her a ride back and the two become acquainted. On the drive, we learn that Anne is a script supervisor and was married to Pierre (Pierre Barouh), who was a stuntman. Pierre was killed in an on-set accident, leaving Anne a widow.

Jean-Louis drives Anne up the next weekend and the two spend the weekend together with their children and become better acquainted. It’s here that we learn about what happened to Jean-Louis’s wife Valerie (Valerie Lagrange). Jean-Louis is a race car driver and had a terrible accident at Le Mans. Distraught over the fact that he might die from the crash, Valerie committed suicide, leaving him a widower. So, we’ve got our romance, but naturally the course of true love never runs smooth.

The problem is that both Anne and Jean-Louis, but especially Anne, are conflicted about the new relationship. She feels that her husband is still with her and that being with Jean-Louis is somehow being unfaithful to his memory.

I have to say that based on that set-up, A Man and a Woman has all of the earmarks of being exactly the sort of romance that I typically hate. Based on the story that we’re given, it would be incredibly easy for this to turn into something very mawkish without too much of a strain. That really is the problem I have with romances in general. They often seem to set up unreal expectations in people, and we’re given something so beyond the possibilities of reality that there’s no way that reality can compete. Mix this with the sorts of stylings common in the French New Wave, and we’ve got soppy romance combined with snooty arthouse sensibilities. Like I said, it’s not a film I was keen to watch.

Quelle surprise, it’s actually great. No, really. I say this without any part of my tongue in my cheek. It’s quite beautiful and nuanced when it has every possible chance of being drippy. There is every possibility of melodrama here, the sort of film that Douglas Sirk would have been proud to call his own, and yet it works on just about every level. There’s a clear set-up for this sort of melodrama in the second half of the film. Jean-Louis and his driving partner prep for and drive in the Monte Carlo Rally, taking place in the south of France over multiple days. The race has 273 cars entered, and terrible weather and icy roads make the driving conditions dangers. Of the 273 cars, only 42 finish the race, include Jean-Louis’s Mustang. I fully expected a terrible crash and a lot of tears at his hospital bedside. She sends a telegram and he immediately drives back to Paris to be with her…and doesn’t go off the road or end up in a coma. I was shocked.

I find a lot of the choices here fascinating as well. The film alternates between color and black-and-white photography, and there’s not a clear definition of when we’ll go from one to the other. For instance, the first meeting of Anne and Jean-Louis is in black-and-white, with her flashbacks to her husband are in color. Later, the Monte Carlo Rally is in black-and-white and Anne working on her film are in color. After the race, she’s in monochrome and he’s in color. When he gets a telegram from her, suddenly he’s in black-and-white. It’s very artsy and reeking of berets and clove cigarettes, and yet the damn thing works.

Here’s the thing: I don’t know why it works as well as it does. I have no idea why I found these characters compelling or why I cared about them. Both Trintignant and Aimee are at the top of their game here. I fully expect that someone will tell me they find this to be little more than a Sirk plot filmed by Godard, and I even understand that opinion. And yet it works. It is perhaps the film’s inherent honesty. The emotions here are real and aren’t artificially enhanced or keyed up by manufactured trauma. It’s just two people trying to figure out if they still deserve to be happy.

It’s not often I see a film these days that really makes me wish I’d seen it years before, but A Man and a Woman is that film.

Why to watch A Man and a Woman: It’s more beautiful than it has any right to be.
Why not to watch: If you don’t buy the artistic elements, you’ll have some problems here.