Film: When My Baby Smiles at Me
Format: Internet video on laptop. 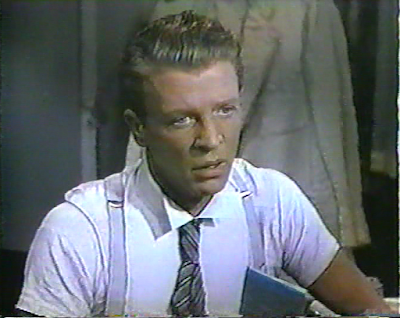 When My Baby Smiles at Me is one of those movies I haven’t been able to find for the last few years. When it popped up on YouTube, I jumped at the chance to watch it, not knowing how long it might stick around. Based on the title, I expected a musical comedy, It’s not. It’s a drama, sort of a romance (because there’s always a love angle in films from this era), and a bit of a musical. It also treads pretty heavily on the boards of The Lost Weekend from a few years before. If you think that means we’ll be dealing with both show business and alcoholism, you’re more right than you know.

We’re going to be firmly enmeshed in the lives of Bonny Kane (Betty Grable) and “Skid” Johnson (Dan Dailey), a married pair of Vaudevillians dancing and clowning their way across stages in the 1920s. Bonny is a decent showgirl, able to knock out a song well enough and with the legs to make the audience enjoy it more. Skid is a comedian/comic dancer and is the true star of the show run by Lefty Moore (James Gleason). All seems well and good, except that, of course, off stage things aren’t that great.

The biggest problem is that Skid is as gifted a drinker as he is comedian. When the movie opens, he’s late for going on, and Lefty is just about to assign his role to Bozo Evans (Jack Oakie) when Skid finally arrives, smelling a bit of booze but still in good form. Of course, he goes on and knocks the audience dead the way he always does. Ah, but it’s not going to be that easy for our married pair. Once off stage, we discover that Skid has received a telegram inviting him to work a show on Broadway…and there’s no mention of Bonny in telegram.

And that’s not all. Chorus girl Sylvia Marco (an uncredited Jean Wallace) who has been prowling around Skid for some time has also gone to New York for the same show. Simultaneously, Harvey Howell (Richard Arlen) has been sniffing around the dressing room of Bonny. Bonny is clear and up front with Harvey about her marital status, and that puts him off a bit, but none of this affects Skid heading to New York without his wife.

You can probably guess about 90% of where this is going, can’t you? Skid continues to drink too much and is caught in the press out with Sylvia Marco. While that’s suspicious and the film is never entirely clear about the relationship, it’s suggested that Skid is much more interested in the drinking than he is on infidelity. In fact, at one point he tries desperately to bring Bonny to New York to be a part of the show and is saddled with Sylvia instead. After enough of these shenanigans, Bonny sues Skid for divorce, which brings Harvey back into the picture.

Will Skid bottom out? (Yes, he will.) Will Bonny come back to him? (Of course she will.) Will there be at least one scene of Skid losing it completely now that he’s lost his wife who truly seems to be the woman he loves? (Yes, and it’s suitably manic.) Will there be a reunion on stage? (Sigh…yeah, that, too.)

When My Baby Smiles at Me is going for several things here in its tidy, 90-minute or so package. It wants to bring in the dance hall numbers, and it kind of does, although they’re not really that great. There’s nothing that happens on the stage of the various shows that you haven’t seen elsewhere in other, better movies. They’re fine if a little cheap and a little plain. But that’s one of the sells of this movie, and they aren’t enough to be interesting. Beyond that, the movie really wants to be about the fact that Skid is a talented guy with a serious drinking problem. Here, the film is a lot more interesting.

This is really where the film should have focused its efforts, because when it does settle on Skid and his issues, it goes somewhere. At the start of the film, Skid is clearly a drinker, but he’s capable on stage. When he goes to New York, his drinking intensifies, but he still seems to hold it together well enough for good reviews. It’s when the divorce comes through and Skid realizes that Bonny is gone and going to marry someone else that he falls completely off the rails. Dan Dailey is really good in this, and it’s in this moment that he earned his Oscar nomination. All of the pain and misery and hopelessness breaks through the façade he’s putting up, and that façade just can’t compete with the darkness in him.

I’d have thought going into this that Betty Grable was the centerpiece, but she’s not. In fact, Grable could have been easily replaced by one of a dozen other leading ladies of the time with no real change to the film. It really is all about Dailey and that desperate need of Skid Johnson to make everyone think that everything is fine when it clearly isn’t and everyone else knows it, too.

Now, give us an ending that suits it, and we’re talking.

Why to watch When My Baby Smiles at Me: Dan Dailey could act.
Why not to watch: It’s the definition of a film not earning the ending it wants.

Email ThisBlogThis!Share to TwitterShare to FacebookShare to Pinterest
Labels: Best Actor, drama, musical, Walter Lang, When My Baby Smiles at Me