Off Script: Isle of the Dead 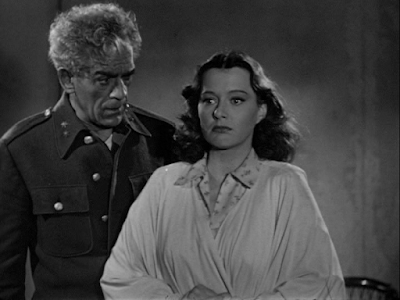 There are a few things you know you’re going to get with a Val Lewton-produced movie. You’re going to get not much in the way of budgets, a film that is really atmospheric, and a film that verges on horror without really being that scary. Such is the case with Isle of the Dead, a film that has clear horror elements without really getting that far into horror territory. The films that Lewton worked on were much more concerned with mood and potentially creating a sense of dread than they were with making something genuinely scary. While Isle of the Dead is an interesting film, it doesn’t manage to do much with scares here, except in a single case.

During the Balkan Wars in 1912, General Nikolas Pherides (Boris Karloff with a curly wig) is known as a strict disciplinarian, essentially forcing one of his officers to commit suicide because some of his troops were late to the latest battle. While the men are over-tired, Pherides forces them to deal with the dead because of the threat of typhus and other diseases that have been spreading on the battlefield. Realizing where he is, Pherides takes American reporter Oliver Davis (Marc Cramer) to a nearby island where the general’s wife is entombed. Once on the island, he discovers that her grave has been desecrated. He also discovers that there are inhabitants on the island.

The main inhabitant is a Swiss archaeologist named Aubrecht (Jason Robards Sr.), who lives with his housekeeper, Kyra (Helen Thimig). His guests include a British diplomat named St. Aubyn (Alan Napier), Aubyn’s sickly wife (Katherine Emery), and her companion Thea (Ellen Drew). Also on the island is another Brit named Robbins (Skelton Knaggs), who excuses himself from dinner and collapses on his way up the stairs. While the general is worried about the spread of disease from the battlefield, the housekeeper is convinced that Thea is a vorvolaka, a sort of Greek vampire, who is feeding on Mrs. St. Aubyn.

The next morning Robbins is dead, and General Pherides calls for Dr. Drossos (Ernst Deutsch), who declares that the man died of septicemic plague. The island is quarantined immediately in the hopes that this new threat will be contained. The plague spreads a bit, though, and soon St. Aubyn finds himself stricken, and he dies quickly. When Pherides demands that he be buried immediately, his wife panics. We soon learn that she suffers from catalepsy and has a lifelong fear of being buried alive.

Next, Dr. Drossos is stricken with the illness, and with each new death, the murmurs from Kyra about the vorvolaka are increased. Soon, Pherides himself is starting to believe in the idea of a supernatural creature preying on the islands dwindling inhabitants despite having scoffed at the notion a day or two before. When Mrs. St. Aubyn falls stricken, the pressure increases even more, as does the potential for a terrible mistake—while Dr. Drossos knew of her cataleptic condition, no one else on the island does.

We’re going to end with a series of confrontations, of course. Kyra and Pherides believe that Thea is the embodiment of evil. Oliver Davis thinks these ideas are ridiculous of course, an opinion certainly influenced by Thea’s attractiveness. And as events continue to unfold, even Thea herself wonders if there is something evil inside her that might be harming others without her being consciously aware of it. Of course, since the movie is only 71 minutes long, everything wraps up too quickly, and a few of the threads that are tied up are done so with a lack of nuance or sense. It’s what happens when you are given only so much celluloid to work with.

Since the film is so short, most of the characters are two-dimensional at best, with only Thea and General Pherides given much of a personality. Oliver Davis is notable mainly for his rather staggering jodhpurs, while the archaeologist Albrecht is notable only as someone who seems to dismiss the idea of medical science, preferring instead to literally pray to Hermes. Robbins, who is in the film for a single scene, has as much personality as just about everyone else. With another 10-15 minutes, this could be turned into something considerably more robust with characters that are a lot more interesting.

What Isle of the Dead does well is create an curious atmosphere. It’s not particularly scary, but it is interesting. The folk tale isn’t fully realized, sadly, so we’re not given a lot of detail of what a vorvolaka is capable of doing or how one is stopped. That would be nice to have.

Ultimately, Isle of the Dead is a lesser film in the pantheon of Val Lewton works, Mark Robson films, and Boris Karloff performances. This isn’t a bad film by any stretch, but it’s only a mildly good one for all the potential the story may have had. It’s hard not to be a little disappointed with it.

Why to watch Isle of the Dead: Boris Goddam Karloff.
Why not to watch: Like most Val Lewton-produced films, it’s too short to really be interesting.