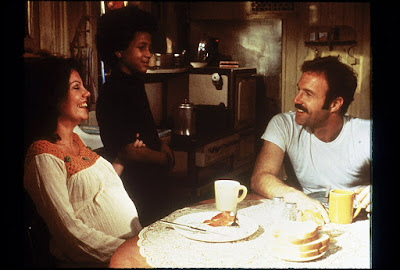 Once again, I’m presented with a movie that I completely didn’t expect. Cinderella Liberty has the sound of a happy movie about a breezy romance. It’s anything but. This is a movie that goes to some horribly dark places and sits there and never lets up. That it ends with a slight uplift is forgivable here—this is a film that needs it. I’m not entirely sure of my final take on it, but that’s par for the course for a film that digs deeply into the sort of petty, selfish wickedness of people.

John Baggs Jr. (James Caan) is a sailor during peacetime who checks himself into the medical facility at the Seattle Naval base. He has a minor medical complaint, but it turns out he needs some tests, and the tests won’t be complete before his ship sails again. This means that, like it or not, he’s on shore until he can be placed on another ship. He’s given what is called a “Cinderella liberty,” which means he is free to leave the base, but the liberty ends at midnight, much like Cinderella’s magic. On the leave, he wanders into a bar and encounters Maggie Paul (Marsha Mason), who is a prostitute and pool hustler. John loses a couple of games to her, then ups the bet to more money than she has. The bet then becomes, more or less, for her services, and he wins handily.

Maggie, we discover, has a young and wild bi-racial son named Doug (Kirk Calloway) who is foul-mouthed and frequently in trouble. John takes an interest in both Maggie and Doug and starts to spend more time with them. This gets easier in one sense for him because the Navy has lost his records, making him more or less a non-person. Without his records, he can’t ship out and can’t even draw pay. Eventually he decides to marry Maggie to help provide for Doug and despite the fact that Maggie is pregnant again with another man’s child.

Through all of this, John also attempts to reconnect with a man named Forshay (Eli Wallach), who was once in charge of training recruits, and in fact trained John. Despite his intense dislike for Forshay, the two eventually bond, partly because Forshay is being drummed out of the service for essentially bullying the son of a man with significant political clout. Desperate, Forshay begins working as a barker for a striptease show and mourning the loss of his career.

I’m not going to go too deeply into where this ends up, but it gets extremely dark. Maggie, we discover by the end of the film, is not the Hollywood standard hooker with a heart of gold. She is perhaps the most painfully selfish human being in a film I have seen in a long time. It’s not that her selfishness is expressed in wanting the benefits of being a sailor’s wife. It’s far more petty than that and far more tragic as well. She is horribly broken and appears to have no other way to behave.

Marsha Mason’s nomination is the reason this film turned up on my radar. I’ve never been a huge fan of Mason. She always seems to me as if she is playing on a stage and reaching for the back row. Her characters always come across as manipulative and awful to me in some very real ways. Well, Maggie Paul is manipulative and awful as well, but this is Mason in a far more restrained role. She’s quite good here. There’s a savageness to Maggie, a sort of feral need to survive by any means possible. I wouldn’t have thought that Marsha Mason was capable of this sort of dirty, almost sleazy performance, and yet she makes it work well.

While Mason seems strangely gifted in a role that is in many ways against her type, this is the sort of role that James Caan was meant to play. He’s always at his best when the world is crashing down around him—films like Thief and Rollerball show him off at his best, fighting against insurmountable odds. John Baggs is the sort of character who’s never gotten a break from anyone in anything. He’s tough and not too capable of tenderness, but he’s also a man with a tender side, almost in spite of that toughness, and Caan plays him convincingly and with real pathos.

Cinderella Liberty is littered with great actors in small roles. Burt Young shows up as the Master at Arms of the Seattle base, for instance, and Dabney Coleman has a scene or two as the base XO. Bruno Kirby plays a deluded and constant-talking shore patrol officer, and Allan Arbus has a scene as a drunken sailor. It’s young Kirk Calloway who is in many ways the most interesting to me, since he is very natural as the almost feral but ultimately decent Doug. I always wonder about child actors like him—he had a career of small parts for a few years and seems to have disappeared from the industry.

I’m not sure what I expected with Cinderella Liberty, but it certainly wasn’t a film that explored the ugly side of the Navy or the human condition. It’s not an easy story to like, but I think it’s an easy film to respect and appreciate. Anything that gets me to not dislike Marsha Mason is certainly worthy of a look.

Why to watch Cinderella Liberty: This is the sort of role James Caan was meant to play.
Why not to watch: Marsha Mason’s character is a truly awful human being.

Posted by SJHoneywell at 7:17 AM