Not Another War Movie 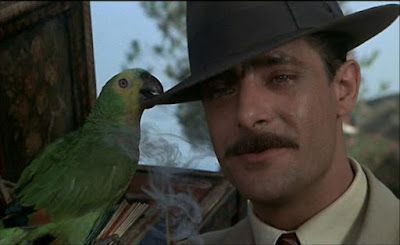 With the movies that are on my Oscar list that are harder to find, I sometimes have to make some sacrifices. Watching a YouTube version of the film is one of those sacrifices. Another is finding a clearly foreign movie only available dubbed rather than subtitled. There’s not much to be done about that, though. Seven Beauties (or Pasqualino Settebellezze) is a true piece of cinematic history, and you don’t really get those that often. Director Lina Wertmuller was the first woman nominated for a Best Director Oscar.

The film is told in a series of flashbacks from the point of view of our main character, Pasqualino Frafuso (Ginacarlo Giannini), better known as Pasqualino Settebellezze, or Pasqualino Seven Beauties. The name comes from the fact that he has been forced to take charge of his mother and seven sisters, all of whom are fairly homely to downright unattractive. Thus his name is sarcastic at best. What he wants more than anything is to marry his sisters off, something that is nearly impossible because of their looks.

The film follows Pasqualino’s “adventures” before and during World War II. While the narrative frequently finds him in essentially the film’s present as a prisoner in a concentration camp, the narrative starts in Naples where Pasqualino is a small-time crook and fancy dresser. His homely sister Concettina (Elena Fiore) has a boyfriend who is more or less threatening to turn her into a prostitute while simultaneously promising to marry her. When Pasqualino confronts him, through a series of events, he accidently shoots the boyfriend/pimp. Panicked, he chops the man up into various bits and ships him off to three different cities in suitcases.

Eventually, he is caught by the police and confesses to the crime. Because he’s confessed, he is considered mentally incompetent to stand trial and is sent to a mental institution. There, he does what he can to survive, which appears to include raping another prisoner, an act that makes our main character difficult to sympathize with, to say the least. Eventually, he is declared sane and sent to a regular prison specifically so that he can enlist in the Italian Army and fight in the war. He deserts (of course) and is eventually captured and thrown into a concentration camp.

Here, still desperate to survive, Pasqualino attempts to seduce the rather terrifying and ugly camp commandant (Shirley Stoler), who eventually lets him live if he picks out a half dozen men from his barracks to be killed instead.

And yes, this is considered a comedy.

It’s not a very funny comedy, though. This is clearly a film that wants to be about something, and I think it is. Seven Beauties is not about the atrocities of war, although those are plentiful here. It’s not about desperation, although most of the characters are plenty desperate throughout the running time. This is a film about survival. What must someone do to survive, and what lengths will we go to so that we can ensure our survival? For Pasqualino, there seems to be no particular depth to which he will not sink and no indignity to which he will not succumb.

Truthfully, I understand most of the nominations here. Wertmuller’s direction is interesting, and we’re clear where we are going with the opening montage. While scenes of war play out, epic destruction of cities and people, we’re treated to something not unlike a beat poetry reading about people who we’re going to be told are more or less the villains of the film. Who are those people? The petty bourgeoisie, more or less. Specifically, it’s the people who don’t bother to get involved with things because those things don’t specifically affect them. It’s people who life their lives without much empathy beyond feeling bad for someone else’s situation without lifting a finger to help someone who needs it. Essentially, it’s the people who weren’t the fascists who let the fascists take power because they couldn’t be bothered to stop them.

In that respect, Seven Beauties may still have some relevance today.

Giancarlo Giannini is interesting in this because he does manage to pull it off. Pasqualino is a terrible person. He’s an opportunist, greedy, violent, not very bright, and far too concerned with his own position than he is with anything else. He is someone who will literally do anything he can to survive by the end, which is very much a reversal of where we think he is at the start. It would be easy to say that he sells out his principles, but it’s clear early on that he doesn’t really have any principles; he has preferences and he has façade. Despite this, Giannini is almost (almost, mind you) sympathetic, or at least understandable.

But is it good? I think it is, although it’s not a film I’m likely to watch again any time soon. While there is clearly humor here, often of the blackest variety, it is also surprisingly squalid and grimy. It’s frequently humiliating, and there’s a part of me that tends to have trouble with that in a film.

Why to watch Seven Beauties: It really is a piece of history.
Why not to watch: For all its comedy stylings, it’s surprisingly unpleasant.