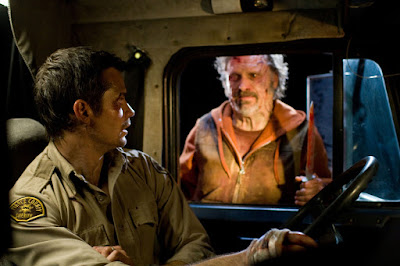 There are a lot of things you can say about George Romero. His ideas are often better than his films, for instance. That’s probably why a lot of his movies end up getting remade. Even some of his less well-known films get that treatment, hence the 2010 remake of The Crazies. In truth, while this is a remake of Romero’s original, The Crazies could just as easily be its own movie. This is not a film that breaks a great deal of new ground.

So let’s take a look at the tropes that we’re dealing with here. A plane crashes in the middle of nowhere (the middle of nowhere, Iowa, in this case) carrying some deadly biological weapon. That deadly biological weapon seeps into the local town’s water supply, and suddenly the residents are becoming infected. A part of the infection is insane, murderous behavior. I’m guess that based on the few sentences above you have thought of at least a dozen movies that follow the same basic idea. That said, it’s important to realize that Romero’s original 1973 version of this story might well be the first that has all of these elements in it, although he certainly borrowed heavily from The Andromeda Strain.

I’ve jumped ahead a little, since our intrepid sheriff David Dutten (Timothy Olyphant) doesn’t find the downed airplane until we’re 20 minutes in. Instead, we get a crazed man carrying a shotgun walking into the outfield of a baseball game. When he starts to raise the gun to fire, the sheriff drops him, and since the man was once the town drunk, he assumes that he’s been hitting the bottle again. However, the tox report comes back clean, meaning his behavior is inexplicable.

Events quickly devolve into more insane acts around the town, which leads to the discovery of the downed plane that has been leaking something into the town’s water supply. Just as things are starting to heat up, the town is corralled by the Army, put under quarantine, and the townspeople are split into groups of infected and not infected. One of those placed in the infected camp is Judy Dutten (Radha Mitchell), who is both the town doctor and David’s wife. David manages to escape from confinement as does his deputy Russell Clank (Joe Anderson). The two then go to rescue Judy, getting there just as the crazed high school principal is about the skewer her with a pitchfork. They leave, bringing along local hospital assistant Becca (Danielle Panabaker).

Ultimately, we discover what is happening, and what is much more sinister, we discover precisely what the military has been charged to do to keep the potential epidemic under control. The last large chunk of the movie consists of our four remaining uninfected (kinda) people attempting to get out of their town and reach the relative safety of Cedar Rapids while all of the forces of the U.S. military and a horde of crazed people are arrayed against them.

Here’s the thing about this version of The Crazies. It’s good. It’s a solid horror/thriller that relies a lot more on what is happening than it does on gore (there’s just a little) and jump scares (although there are a few, one of which was quite effective) to build up the boo factor. I appreciate that. There are two significant problems with it, though, that bring what is a good, serviceable horror movie down to earth.

The first issue is serious, but not critical. Too much time is spent with the scares coming from the crazed locals. I get that, but once we’ve reached the middle of the film and beyond, and especially in the last half hour when we’re very clear on what is happening in terms of government intervention, the main enemy has switched in the minds of the viewer. That’s great, but it doesn’t really happen in terms of the threats that our characters are exposed to. Sure, those threats are real, but there are simply too many crazies that have managed to elude the government forces to make much sense. The ante has been upped mentally and emotionally, but not physically. It’s a disappointment.

The second problem is perhaps more serious. There’s nothing new here. The Crazies did a nice bit of business and got generally good reviews, but there’s nothing here that you haven’t seen. In fact, I’ll go so far as to say that even if you haven’t seen The Crazies, you’ve seen The Crazies. There’s nothing here that isn’t done as well or better in films like 28 Days Later, Contagion, Outbreak, Slither, Invasion of the Body Snatchers, The Andromeda Strain, Children of Men, and even the made-for-television version of The Stand.

And so really, that’s it when it comes to The Crazies. It does just about everything right, but nothing it does brings anything new to the table. It’s good. It’s a solid, serviceable, entertaining horror/thriller, but if you’ve seen any of the movies I’ve mentioned above, you’ve seen everything you’re going to get here.

Why to watch The Crazies: Infection is always scary.
Why not to watch: Even if you haven’t seen this, you’ve probably seen this.

Posted by SJHoneywell at 9:19 PM