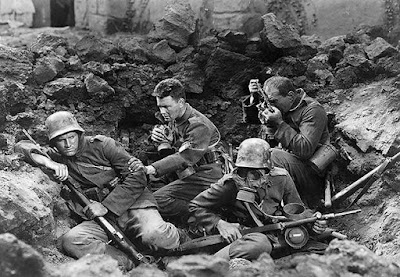 So what’s a country to do when it claims to be founded on freedom for all and has a track record of being exactly opposite that? Well, beyond attempting to change as much as possible in the right direction, it starts to produce media of various types to help spur that change. Go for Broke! is a post-World War II propaganda film, this time dedicated not to hyping up the victory or even promoting the armed forces in general, but to highlight the service of a specific group of American citizens. Specifically, this is a film about Japanese-American soldiers fighting in Europe. That it gets only part-way to the message it wants to have and still contains a sizable dollop of racism is unfortunate. But hey, baby steps, right?

What this means in terms of the actual film we are presented with is that we’re going to be spending a good amount of time among the men of the 442nd, but we’re going to be concerned in no small part with their white and initially racist lieutenant, Michael Grayson (Van Johnson). Grayson is a Texas boy and a “90-day Wonder,” meaning he was pushed through officer training. When out, he is assigned to the 442nd in charge of a group of Japanese-Americans from both Hawaii (known as Buta-heads) and the mainland (called Katonks), and Grayson is not pleased with this arrangement.

We are going to spend some time getting to know a little bit about our Nisei both before they ship out and during the fighting in Italy and France. There are a few of these characters, Tommy (Henry Nakamura) in particular, who speak a fairly broken English. The rest—Sam (Lane Nakano), Chick (George Miki), Frank (Akira Fukunaga), Ohhara (Henry Oyasato) are, like the majority of people who were born and raised in the U.S., possessed of no particular ethnic accent. This is critically important for the message the film is attempting to present. After all, the central idea of Go for Broke! is that the Nisei were every bit as American as everyone else regardless of their ancestry.

That said, the bulk of the film really does deal with the progression of Michael Grayson from racist asshole to someone who learns to respect the bravery and dedication of his Japanese-American troops. There are a couple of problems with this, though. The first is that rather than putting the focus on the men who were the victims of internment camps and blatant racism, it’s on the white guy. The second is that Grayson’s progression from racist to significantly less racist is…subtle at best. It’s not really clear until he runs into a still-blatantly racist guy from his old outfit and knocks him down, but he naturally does this without being in view of his own men, who still consider him to be a racist ass.

At best, Go for Broke! is unfocused. It desperately wants to include the stories of the men who are risking their lives for a country that appears not to want them, but also wants that story of redemption for Grayson. Since the movie is only 90 minutes long, it doesn’t have enough space to do both, and so it kind of does neither. We get moments from the men that are very American, often very Hawaiian. They get mail from home. They talk about their families. And they also complain about their treatment, often specifically their treatment at the hands of Lt. Michael Grayson.

Another thing that is clear is that not all of these men were trained actors. Some of the line readings are pretty wooden or are decidedly over-the-top. That’s understandable, and while a little cringey in the moment, not too terrible. I’m actually more impressed that a movie made in 1951 used legitimately Asian actors rather than whitewashing a great deal of the cast as would often be the case.

Because of this, I’m a little torn on Go for Broke! I think its heart is in the right place, and for the time, it’s pretty forward-thinking. It’s regressive now, though. I’m not going to hold the movie responsible for that. The main message of the movie seems to be that inside every Japanese-American is a good, white American trying to get out. The film can’t quite get to the conclusion that Americans are Americans, although it does literally say this more than once. That’s the message, but the subtext can’t quite make it stick.

It’s interesting. It’s worth looking at. I’d be fascinated to see a modern film based on the same basic story, because I think it would tell the right story better and also give the audience the space needed to genuinely know and understand the characters. But, for this time, this might be about as far as we could get.

Why to watch Go for Broke!: A solid war movie with a pretty good message.
Why not to watch: It’s clear that not all of these guys were actors.

Posted by SJHoneywell at 8:14 AM