Films: The Last House on the Left (1972)
Format: DVD from NetFlix on laptop. 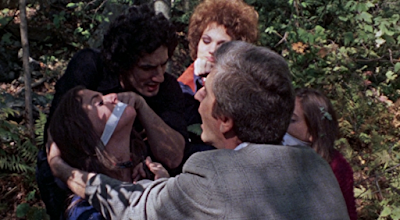 The horror lists that I decided to pursue had a number of movies that I hadn’t already seen on them and a couple that I was genuinely not looking forward to watching. One of those was The Last House on the Left from 1972. This is one of those movies from this era in horror that I had heard about from the time my brother started getting into horror movies. It was a movie that I knew existed and knew was on the harder edge of horror, much like The Texas Chainsaw Massacre and Faces of Death. I knew enough about it that it wasn’t something I particularly wanted to watch despite it being a massive hole in my viewing.

This is despite being a fan of Wes Craven. Craven, if nothing else, did a hell of a lot for horror as a genre. If he had done only the Nightmare films or just Scream, he would have still carved himself a place in horror history, but he did both, as well as The Hills Have Eyes and The Serpent and the Rainbow, a film I still think is terribly underrated. I still find it amazing that Craven earned a degree from evangelical Wheaton College, an institution residing about a mile from where I grew up.

The Last House on the Left is Craven’s first directorial effort, and it shows. This is a movie made very much on the cheap in terms of, well, everything. The film stock, the editing, the sound, it’s all dirt cheap. And that’s okay, because that’s what this film is. It’s a cheap, dirty exploitation film, but, true to it being written and directed by Wes Craven, there’s something more here. For as nasty and mean as this movie is, the entire point of it is that violence doesn’t solve anything and only creates more violence.

Mari Collingwood (Sandra Peabody), on the day before her 17th birthday, is heading into the city with her friend Phyllis Stone (Lucy Grantham) for a concert. Coincidentally, a vicious criminal named Krug Stillo (David Hess) and his compatriot Fred “Weasel” Podowski have escaped from prison with the assistance of Sadie (Jeramie Rain) and Krug’s heroin junkie son Junior (Marc Sheffler). Think their paths are going to cross? Of course they are.

The two girls are ensnared by the quartet of villains, who proceed to force them to do terrible things before eventually killing them both. Meanwhile, Mari’s parents (Richard Towers under the name of Gaylord St. James and Cynthia Carr) plan her birthday party by decorating the house and making a cake. Then, in the sort of twist that only happens in a movie, Krug and his minions, attempting to get away from the area, wind up at Mari’s house. Of course, Mari’s parents figure out exactly who they are, and the third act concludes with bloody, vicious revenge.

I won’t pull punches: it’s horrible in just about every way it can be. It is, in Wes Craven’s own words, appalling.

But because of what it is, it’s almost impossible for me to judge. There is no way to genuinely recommend this film to anyone. It looks like a snuff film in so many ways. It’s grimy. The film itself looks grimy, as if it was dirty going into the camera. It’s also amateurish. There are scenes of a pair of bumbling cops who are played for laughs despite the fact that had they been remotely competent at their jobs, both Mari and Phyllis would have survived to the end of the film. Because of this, it’s tonally all over the place, and even the soundtrack seems inappropriate in at least half of the film.

And yet, there’s a kernel of something here. Noting about The Last House on the Left recommends itself to anyone, save the intent of the movie. The point of this all is to show the hopelessness of violence, to create something so terrible and brutal to demonstrate its futility. Hollywood loves revenge pictures, and loved them in the early 1970s. In a revenge picture, someone kills someone else, and then the protagonist spends the rest of the film revenging his partner/wife/child/dog/whatever. When the end credits role, the bad guys are dead and our hero is sated on all that revenge-y goodness.

Well, all of that happens here, too, except for the end. When the end of the film roles around and the villains have been dispatched in a variety of terrible ways, Mari and Phyllis are still dead. The revenge is spent and there’s just emptiness left. The violence just ended up killing more people and nobody ended up feeling any better.

In that respect, The Last House on the Left is impressive, but in no other respect. In fact, it’s only barely watchable.

It’s a hard movie to like and an impossible one to recommend, but I understand why it’s important. I’ll probably never watch it again, but I do understand why I needed to see it.

Why to watch The Last House on the Left (1972): If you’re a horror fan, you kind of have to.
Why not to watch: There’s not a lot positive to say about it.

Email ThisBlogThis!Share to TwitterShare to FacebookShare to Pinterest
Labels: horror, The Last House on the Left, Wes Craven