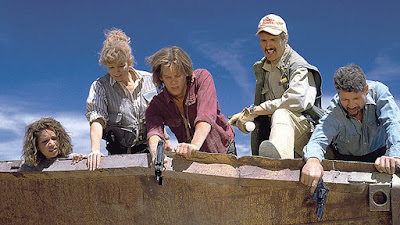 I like Kevin Bacon as an actor, and I’m not alone in that. There’s a reason that “Six Degrees of Bacon” became a thing—Kevin Bacon is not only in a lot of movies, but he’s easily identifiable and he’s also been in a lot of movies with ensemble casts. Bacon has been in a lot of movies I really like--A Few Good Men, Apollo 13, Mystic River--but there may not be one that I enjoy more just for pure viewing pleasure than Tremors. This is a textbook example of how you do a monster horror/comedy.

Val (Kevin Bacon) and Earl (Fred Ward) work as “handymen” in Perfection, Nevada, a tiny little town in the ass-end of nowhere. Both of them want nothing more than to get out of the life they’re living. Unfortunately for the two of them, the day they happen to leave is the same day that the monsters make their appearance known to the town. A few mysterious deaths and disappearances, and suddenly Val and Earl are in the middle of monster movie.

Battling with them are a collection of colorful locals. The most notable of these are Rhonda (Finn Carter), a grad student monitoring several seismology stations and the Gummers (Michael Gross and Reba McEntire), survivalists who came to Perfection because of its remote location. There are a few others in the town, and soon everyone is in danger from the creatures.

So what are the creatures? That’s never fully established. Nicknamed “graboids,” the monsters are bullet-headed blind worms about 20 feet long. Their mouths open up to reveal multiple prehensile tongues that have their own mouths that latch onto anything. They hunt through vibrations in the ground. When I say that the creatures aren’t established, what I mean is that there’s no source of them revealed. Are they mutants? A government experiment? From space? We don’t know and really, by the end of the movie, we don’t really care. At least I don’t.

I mean that in the best way possible. I don’t mean that I don’t care. What I mean is that the source of the creatures is ultimately unimportant to me because it’s far less important than the story we’re given. In fact, I rather like that we don’t ultimately get a full understanding of what the creatures are. Instead, we’re just left to deal with the creatures as they are and the threat that they pose.

For a low-budget science fiction film, Tremors does just about everything right. It provides a few comic gore moments, but nothing that would make even the most easily squeamish person do much more than crinkle his or her nose and nothing that couldn’t be shown on network television. In fact, the only reason this was initially given an R rating was for language, most of which was cleaned up. The scare moments aren’t really that scary. While this might bother younger kids, no one old enough for its PG-13 rating would have a problem with anything here.

It’s also, for a dumb monster movie, pretty smart. One of the things it does well is provide us with creatures that at first appear like nothing more than ravenous eating machines but that slowly prove themselves to be smarter than anyone thought. They learn, which makes them far more interesting foils than they would be as simply mindless monsters.

What really works for Tremors, though, is that it’s just fun. Even though it boasts a decent body count (eight or so people) and even though the danger presented in the movie is real, it never loses its comic tone. Val and Earl are bumbling heroes, but they are toned exactly right. They’re not such complete numbskulls that everything they do to survive works by chance, but more than once they get out-thought by the creatures.

It’s hard for me to work out what doesn’t work here since I’ve seen this at least half a dozen times. Perhaps the only real issue I take with it is that the romance that blossoms through the film between Val and Rhonda is pretty telegraphed from their first meeting. It’s one of those movie romances that seems more driven by the plot than by anything else, something that’s there because the viewers expect at least a little bit of a love story (or at least a kiss at the end) to signify a happy ending.

That said, Tremors is the sort of movie that anyone who wants to make a good monster movie should watch. There are some tremendous set-piece scenes, like a creature breaking into the Gummers’ underground weapons bunker and Val’s run for the bulldozer they hope will be able to drag everyone out of danger. The movie hits the right tone from the opening moments. While it ends a little too abruptly, there’s not a frame of it I don’t find entertaining. Watching Tremors is like slipping into a comfortable pair of shoes molded through wear to fit perfectly. It may not always be the movie I want to watch, but it’s never a movie I wouldn’t watch.

Why to watch Tremors: This is low-budget science fiction horror the way it should be done.
Why not to watch: If this isn’t your kind of movie, you won’t understand why people love it.