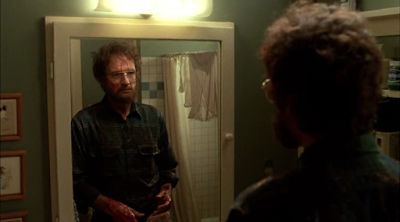 An inventive screenwriter can find horror anywhere. Some of the most interesting horror movies around started with odd little premises or simple “what-ifs.” In the case of The Stepfather from 1987, that what-if question concerns just how far someone might go to try to create the perfect family. It’s an incredibly simple idea, and The Stepfather takes that question in a particularly disturbing direction.

The film opens with an unnamed man (Terry O’Quinn) washing blood off his hands. He then cuts his hair and shaves off his beard, altering his appearance dramatically. When he is done transforming, he goes downstairs and we see that he has evidently brutally murdered his entire family. He walks out of the house with a suitcase, gets on a boat, and when the boat is in the middle of the water, he drops the suitcase over the side.

The story jumps a year ahead and the unnamed man is now Jerry Blake. He’s also got an entirely new job and a new family in a new community. Jerry is now married to Susan (Shelley Hack), a widow with a teenaged daughter named Stephanie (Jill Schoelen). Since the death of her father, Stephanie has been troubled, getting into a lot of “mischief” at school. She’s also not a huge fan of her new stepfather, and spends a lot of time complaining about him when she talks to her therapist, Dr. Bondurant (Charles Lanyer).

While all of this is happening, we also meet Jim Ogilvie (Stephen Shellen), the brother of the woman murdered in the opening scene. Jim is desperate to find the man who was once his brother-in-law. He starts doing a little investigation based on a not-very-established but nonetheless correct intuitive leap that the man is almost certainly the sort of person who will do the same thing again, insinuating himself into another family somewhere else and, eventually, kill them as well.

The Stepfather turns on a couple of important elements that really sell it. The first is the excellent performance from Terry O’Quinn. O’Quinn is completely believable in the role. He also has a particular talent for stopping on an emotional dime, and completely changing his approach to a question or problem. Stephanie finds him ranting in the basement (something that starts to convince her that he might be off) until the moment he sees here. When he does, his gears switch immediately ahd he’s right be to laying on the charm so thickly, he should be using a trowel.

The plot also works surprisingly well. It would be easy, for instance, to guess that the actual plot of the film is damaged by the opening sequence. The opposite is true. In fact, that Jerry is a known killer in our minds means something. We’re ready for him to snap at any moment and for any reason. It’s very effective because we don’t know when, what, or why. We only know it’s coming because it has been established that he’s done this before and may want to do it again.

Sadly, The Stepfather slips into some horror movie tropes in the last act. It does a fine job of maintaining itself for about an hour, but around the one-hour mark, it starts to get bogged down in trying to give the audience the horror/thriller they think they want. Once we start veering off into Jerry beginning his completely breakdown, I start to lose interest a little.

All of this can be forgiven for the great premise, though. It’s a reminder that we often let people into our lives very quickly, and we don’t always know that much about them. More, everyone has huge chunks of their past that aren’t always common knowledge. When those people with hidden pasts are not merely a part of our lives but live in our house with us, there’s a great potential for danger and for the sort of thriller that sticks with the viewer for a long time. The Stepfather is that sort of movie. I just wish it had avoided the tropes.

Why to watch The Stepfather: It’s a better plot than you’d expect.
Why not to watch: It just can’t get away from the clichés at the end.