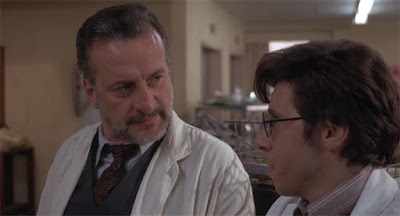 I haven’t been shy about my reasons for doing the Oscar round-up posts every week. These aren’t so much a celebration of Oscar as they are an accounting of just how often AMPAS gets it wrong. Still, there are times when I have to admire the balls they sometimes show. In 1970, George C. Scott won the Best Actor Oscar for Patton and he was my pick as well. Scott turned down the Oscar, though, becoming the first person to do so. So the Academy nominates him the following year for The Hospital anyway.

Scott was known for, among other things, being able to turn on the anger at the drop of a hat, something he shared with Lee J. Cobb, and the main reason I sometimes get the two mixed up. In The Hospital, he plays Dr. Herbert Bock, Chief of Medicine at a teaching hospital. The problem is that at the hospital, everything is coming off the hinges, much like his own life. Bock currently lives in a hotel since he has separated from his wife, he’s kicked his son out of the house, his daughter has had two abortions and has been busted for dealing drugs, and he’s currently impotent.

The problems at the hospital are rife, but are getting worse thanks to a series of medical misadventures. A man named Guernsey (Roberts Blossom) is misdiagnosed and dies in his hospital bed. The man sharing his room (Barnard Hughes) had a similar situation, being badly misdiagnosed and because of it, put into a coma. Problems are compounded when an intern named Howard Schaefer (Lenny Baker) uses the recently vacated bed from Guernsey for a tryst with a nurse. The next morning, Schaefer is found dead in the bed with an IV hooked up to him. Another doctor drops dead of a heart attack while in the ER. And then a nurse dies under the knife in the operating room when she is suddenly in the place of a patient. Clearly, something very wrong is going on.

While all of this is happening, Bock meets Barbara Drummond (Diana Rigg), the daughter of the comatose man in Guernsey’s original room. She plans on removing her father from the hospital as soon as she can and returning him to Mexico where he does missionary work. Bock and Barbara have a heart-to-heart that ends up with the two of them having sex (so much for Bock’s impotence problem) and beginning a relationship, which at least temporarily curbs Bock’s nascent suicidal tendencies.

In the third act, we discover exactly what is happening at the hospital and who is responsible for the sudden slate of deaths and why. It’s a strange little twist, and it mostly works.

One of the nice things about The Hospital is some great people in small roles. I’ve already mentioned Roberts Blossom, but there is a nice role for Nancy Marchand as the head nurse and Stockard Channing as an uncredited nurse. Katherine Helmond makes an appearance as well, as does Richard Dysart as a corrupt and not very good doctor. Best of all, we get the great Frances Sternhagen as the woman at the hospital in charge of billing.

That The Hospital is brutally sardonic and dark is not surprising since it came from the pen of Paddy Chayefsky. In fact, it won the Oscar for Best Original Screenplay, the second of Chayefsky’s three wins. This is a movie that is funny in the same way that Network (Chayefsky’s third Oscar win) or Dr. Strangelove are funny. I didn’t laugh once while watching the film, but there’s clearly humor here of the darkest sort.

I think The Hospital simply goes too far. Yes, the healthcare industry has problems. Yes, mistakes get made. But this is a sincerely dark vision and does for hospitals exactly what Chayefsky did for television news with Network. I get it, and I get that we might need to take something to the extreme to highlight the issue. I get that, but the conclusion—where the murders are coming from and how they are happening, seems to work against the indictment that the film wants to make.

I’m a bit torn. The performances are good, and it’s fun seeing Oleanna Tyrell back when she was young and could legitimately pull off being a sexpot, but I’m not convinced it’s a film I need to watch again.

Why to watch The Hospital: Everyone needs a modicum of dark comedy.
Why not to watch: It veers far too much into farce.