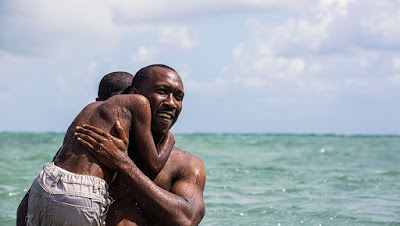 Every year in January, the Oscar nominations are announced, and that means I need to get to work on knocking out the films that have been nominated on the blog here. I typically put some stress on Best Picture nominations because there are more of them than there are for the other categories, and because knocking out Best Picture nominees means that I’m usually reducing the numbers in other categories as well. I often watch the Best Picture winner soon after the awards, because there’s generally that brief span of time where I’m missing having viewed a single Best Picture winner. This year, I did the opposite, waiting to watch Moonlight last of the nominees.

I knew very little going in other than that it won. I knew it was the first LGBTQ-themed film to win Best Picture, or at least the first that had overt homosexual themes (you could argue, for instance, Midnight Cowboy had some leanings in that direction). I knew it was based on an unproduced play called “In Moonlight Black Boys Look Blue.” And I’d heard that Mahershala Ali was great, something kind of unsurprising given that he’s good in Hidden Figures and one of the two best things in the second season of Daredevil on NetFlix.

Moonlight is less a story than it is a character study taken at three distinct moments in the main character’s life, as a child, a teen, and an adult. This character is Chiron (Alex Hibbert, Ashton Sanders, and Trevante Rhodes respectively). In the first act, Chiron is quiet and uncommunicative and goes by the nickname Little. We see him pursued by a gang of kids and hiding in an empty apartment of a crackhouse where he is discovered by Juan (Mahershala Ali). Juan takes him home and introduces him to his girlfriend Teresa (Janelle Monae). Little spends the night before being returned home to his mother, Paula (Naomie Harris), who is herself a drug addict and frequently buys from Juan.

Chiron is raised in part by Juan and Teresa since Paula is often smoking the crack that Juan sells her. Juan feels responsible for Chiron and is open and honest with him. Chiron is starting to come to terms with his own sexuality, and since he is frequently targeted as being gay, he asks Juan what that means. He also asks Juan whether or not the drugs his mother takes come from him.

We move forward to the second act with Chiron in high school, dealing with bullying for his supposed sexual orientation. Most of the bullying comes from Terrel (Patrick Decile). The only friend he seems to have is Kevin (played in the three acts by Jaden Piner, Jharrel Jerome, and Andre Holland respectively). By now, Paula has turned to prostitution to fuel her drug habit and also steals money from Chiron, who is sometimes given money by Teresa. During this act, two important events happen. The first is Chiron’s first real sexual experience at the hands (literally) of Kevin. The second is the school bully forcing Kevin to beat Chiron, which results in Chiron assaulting Terrel and being arrested.

In the third act, Chiron has more or less assumed the mantle of Juan and is dealing drugs, albeit in Atlanta and not Miami. He receives a call from both Paula, who is in a recovery center and from Kevin, still in Miami but now with a child and a job. Since the bulk of what Moonlight is ultimately about comes in this third act, the less said about it in a review the better, since it’s something that should be experienced rather than spoiled.

If Chiron were not an interesting character and at least partially sympathetic, Moonlight would fail on its face. But Chiron is interesting in many ways. All three of the actors who play him have a unique take on the character at these different stages in his life, and yet all three performances are similar in many ways. There are traces of the child Chiron in his teenaged incarnation, and elements of both his childhood and youth in the Chiron who deals drugs in Atlanta.

I called Moonlight a character study earlier, and it is, but it’s also something akin to allegory. Chiron in many ways is standing in for an entire section of the population. How Chiron finds his way in the world is a function of the environment he grew up in and lives in now, but he is also a function of his own sexuality and how that is approached and dealt with by his society and society at large. Chiron’s sexuality essentially becomes something with which he will not deal and simultaneously drives virtually all of his actions. Can he be a man and be gay? Can he be a black man and be gay? When he’s assaulted in school, he refuses to tell anyone who was responsible for his beating and is told that if he were a real man, he’d turn in the responsible parties. Even in being victimized, Chiron’s masculinity is challenged. Because of this, his sexuality remains in many ways unexplored, but that attack on his masculinity seems to drive every action he takes.

This is what makes the film important and what makes it worth watching. The questions that Moonlight raises are real, and, like any good movie that asks such questions, it doesn’t really answer them. The ending of the film is not really an ending but simply a place where these questions have been fully asked and left unanswered. It’s the right place to end the film because it isn’t the end of the story but the end of the question.

I can’t say that Moonlight is my favorite film from last year, because it frankly isn’t. I can’t say if it’s the best movie from 2016, either, and that’s a question I will eventually take up on this blog. I can say that right now, it might be the most important film from 2016 because of the questions it asks and because of how those questions are asked. It’s a film that demands to be seen and demands to be talked about.

And for what it’s worth, I’ve once again seen everything that has ever won Best Picture at the Oscars.

Why to watch Moonlight: It’s fascinating.
Why not to watch: The questions it asks are very uncomfortable.