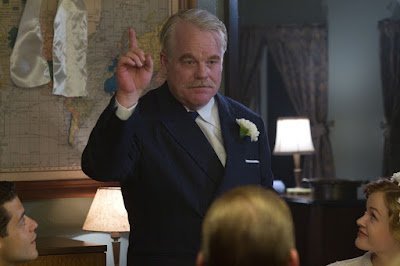 Looking at the nominations for Best Original Screenplay 2012, I find it difficult to genuinely find places for improvement. A lot of the movies I like from 2012 are adapted screenplays, and the other original screenplays I like are movies like The Raid: Redemption, which aren’t going to get a great deal of Oscar love. The same can be said of Seven Psychopaths and Looper. Sadly, The Cabin in the Woods falls into that group as well despite it being a truly inventive film and essentially rewriting an entire genre in an effective and clever way. There’s slim precedent for animated films being nominated in this category, but both ParaNorman and Wreck-It Ralph certainly seem like they could be here. In terms of what Oscar looks for, The Master seems like the biggest miss.

5. I think Zero Dark Thirty is a pretty good movie, but it’s also one that I think is plagued with problems. The main problem I have with it is that it rewrites history in significant ways. There’s always going to be some rewriting of history in any film, but it’s a significant problem with Zero Dark Thirty. Specifically, and I know there is some disagreement on this, I think the film’s narrative offers rationale and support for using torture. Movies have a way of usurping history and reality for us, and I think that’s a dangerous position to take. Yes, it’s been argued that the movie does the opposite, but if that’s true, it’s too subtle to be effective for the sort of person who thinks torture is a legitimate option.

4. I’ve never been shy about the fact that I like Quentin Tarantino a lot less than just about everybody else that I know. That being the case, my putting Django Unchained in fourth place probably isn’t too surprising. That’s not why it’s here, though, at least not specifically. The reason is that I think Django Unchained is only two-thirds of a movie. I genuinely liked the first two acts of the film, and then we get to the third act, which seems to be nothing more than Tarantino making his typical bonanza of violence, this time in a western setting. I felt let down by the last half hour or so, especially after how much I enjoyed the first parts.

3. Flight is a film that is in some ways hard for me to judge. There’s a lot to like here, starting with the performances of Denzel Washington and John Goodman. The screenplay is an interesting one, and both it and Washington manage to create sympathy for a man who in a lot of ways doesn’t seem to deserve a great deal of sympathy. Ultimately, I like the movie and I like the story, but I don’t like it as much as the two nominations I haven’t mentioned yet. I like the nomination and I’m glad it’s here; it just doesn’t win.

2. Amour was my choice for Best Picture for 2012 and Emmanuelle Riva was my choice for Best Actress, but the screenplay is not my choice, despite how good I think it is. There’s a lot to like with Amour, even if “like” is probably the wrong word for a film that covers this topic and was directed by Michael Haneke. What I like about the film is that it feels real in so many ways. This is a terrible, tragic story and hard to watch, but at no time while watching it did I feel like there was anything false or overly dramatic. It’s brilliantly written, and in a lot of other years, I’d probably pick it.

1. There are a few changes I would make to this list of nominations given the chance. While I’d love to have movies like The Cabin in the Woods be legitimate contenders for this category, it wouldn’t change the fact that Moonrise Kingdom would be my choice for Best Original Screenplay. Yes, it’s quirky (which I expect from Wes Anderson), and perhaps it’s a little too sweet for some people, but I think it’s a wonderful film and a beautiful story. It’s sweet, but it’s sweet in exactly the right way. It never gets cloying, but instead runs a close line between reality and almost magical realism. I like the characters and I feel like I understand a lot about them and like them because of what I know. It’s my winner.

Posted by SJHoneywell at 9:20 AM