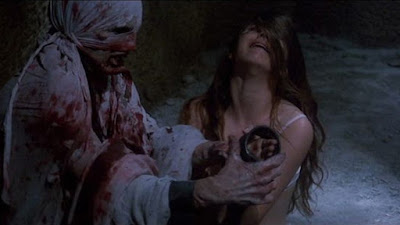 You’re not going to get a great deal of subtlety from a direct-to-video movie directed by Stuart Gordon. What you are going to get in this case, though, is plenty of Jeffrey Combs, and that’s never a bad thing. When the movie is named Castle Freak, you should have a pretty good idea of what is on offer. There’s going to be a castle, and there’s going to be a freak inside the castle. Honestly, I had a hard time not having “Super Freak” running through my head for most of the film’s running time.

Enter the Reilly family, John (Jeffrey Combs), Susan (Barbara Crampton), and daughter Rebecca (Jessica Dollarhide). John Reilly has inherited a castle in Italy. We learn soon enough that the Reilly family has suffered some significant tragedies at the hands of John. One night, while driving drunk, he got into an accident that killed his young son J.J. and blinded daughter Rebecca. Things are naturally tense in the family, with Susan blaming all of the problems, evidently quite deservedly, on John.

The goal of the Reillys is to liquidate the estate he has inherited as quickly as possible. But, since we know the name of this movie, there’s going to be something of a surprise lurking in the basement. This is a traditional, old castle, which means that there are big rooms, corridors, and a dungeon. In the cells there is a creature, evidently once taken care of by the duchess who died and left the place to John. When Rebecca goes wandering, the occupant of the cell, the eponymous castle freak (played in heavy prosthetics by Johnathan Fuller) realizes that the castle is once again occupied, although he’s still not being fed.

Needing to feed, our castle freak escapes his manacles by breaking off one of his thumbs and then forcing his way out of the cell door. Once released, he begins wandering the castle, and suddenly we’ve got a slew of unexplained absences and disappearances, including a prostitute brought back to the castle by John. Of course, since this is a movie, no one knows about him except for Rebecca, who is both young and blind, so no one believes her.

The disappearances naturally get blamed on John, but of course he’s not the one responsible. Eventually, there’s going to be a big confrontation between the Reillys and the castle freak as the film comes to a close. And, of course, we’re going to find out the true identity of our mutilated castle denizen.

Castle Freak seems to exist for a couple of specific reasons. The first is because it is vaguely based on an H.P. Lovecraft story called The Outsider. This falls right in line with the stuff that both Jeffrey Combs frequently acted in and the stuff that Stuart Gordon directed. The second reason for this film to exist is for shock and gore. There’s a lot of blood here, but it’s more than that. We’re given some pretty graphic stuff.

In particular, the death of the prostitute (Raffaella Offidani) is pretty nasty. The freak watches John doing the nasty with her in one of the lower areas of the castle. John sends her away and the freak captures her and drags her off and more or less attempts to replicate what John did, but with a lot more teeth. This is also where we get a full-on shot of the freak’s nether regions and we discover that the tortures he underwent include having his penis cut off. So, we get a gaping wound area with swinging testicles. It’s about as disturbing as you’d think. I mean, Game of Thrones is pretty graphic and even that show has never given us a full frontal look at Varys or Greyworm sans pants.

Castle Freak, for all its being based mildly on a classic story, is laden with a lot of the problems that happen with films in this genre. The ending really only works because everyone is pretty stupid. For instance, eventually, we find a couple of bodies in the castle and the police arrest John. That’s pretty standard. So what happens to Susan and Rebecca? They stay in the castle. I just don’t get that. Your husband or father has been arrested for a couple of grisly murders, the crime scene is literally in the place you are staying…and you spend the night there? There aren’t any hotels in a 50 mile radius? And, of course, John finds a way to break out of the police station so he can return to the castle for the final confrontation.

So, Castle Freak doesn’t go anywhere new despite having a pretty grisly monster and some solid gore. I’m impressed with the full-body prosthetic work for the freak himself. But as far as the story goes, it’s pretty standard fare. The prosthetics and the wacky performance of Jeffrey Combs are the best things here, and I think that’s probably enough.

Why to watch Castle Freak: Because Jeffrey Combs deserves your love.
Why not to watch: While it’s fun, it’s pretty dumb.