It's in the Way that You Use It

Film: The Color of Money
Format: DVD from Sycamore Public Library on laptop. 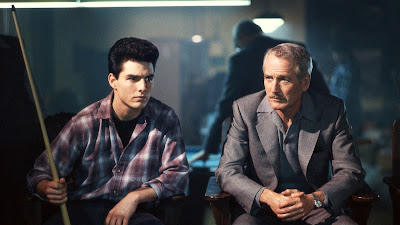 When you discuss Oscars, eventually the conversation will get around to people who won a career Oscar in the guise of a competitive one. None may be more clearly a case of this than Paul Newman’s win for The Color of Money. Newman had so definitively deserved an Oscar before 1986, but lost for Cat on a Hot Tin Roof, The Hustler, Hud, Cool Hand Luke, Absence of Malice and The Verdict and wasn’t nominated for Butch Cassidy and the Sundance Kid or The Sting, and so, finally, the Academy gave him one for a 25-years-after-the-fact sequel to The Hustler. Don’t get me wrong; Newman deserved an Oscar in his career, and while The Color of Money is a lesser film in many respects, he’s still worth watching in it. It just seems a shame that he won for something that pales in comparison to so much of his other work. Sad, but true.

Anyway, The Color of Money is a sequel to The Hustler 25 years later. Fast Eddie Felson (Paul Newman) has given up the pool hustling game and now works as a whiskey salesman, something for which he is well suited. He also functions as a stakehorse for Julian (John Turturro), covering his bets and taking the lion’s share of the winnings. One day at one of his stops while flirting with his girlfriend bartender Janelle (Helen Shaver), he watches Julian lose over and over to a new player named Vincent (Tom Cruise). After spending a little time observing both Vincent and his girlfriend Carmen (Mary Elizabeth Mastrantonio), he offers them a proposition. Go out on the road with him for a few weeks, learn how to really hustle pool, and then show up in Atlantic City for a 9-ball tournament and clean up both in terms of winning and in betting.

There’s friction right away. Vincent is young, talented, and cocky, and doesn’t like the idea of playing just well enough to lose convincingly. The idea is to be seen as a good enough player to enter the tournament, but not so good that the odds on him will be small. By fronting as someone who isn’t as good as he thinks he is, the odds against him winning any matches will be significant. Carmen understands this right away, while Vincent chafes by being forced to lose, even if what he’s losing is Eddie’s money.

Eventually, Eddie is bitten by the pool bug again and starts playing. This lasts until he finds himself hustled in turn by a player named Amos (Forest Whitaker). Broken by a significant loss, Eddie hands over a lump of cash to Carmen and Vincent, giving them enough to get to Atlantic City and the tournament. On his own, Eddie gets himself back into the groove of playing competitive pool and enters the tournament himself, which will naturally lead to a showdown between student and master.

The Color of Money is a pretty straightforward set up. In that respect, it’s pretty much exactly what you expect it to be. There’s going to be both tension and grudging respect between Vincent and Eddie with a great deal of that culminating in their showdown. The difference here, and it’s only a slight difference, is that in this case, the focus is on the master trying to stay one step ahead of his student and not the student attempting to eclipse the master.

Tom Cruise, especially at this point in his career, excelled at playing brash, cocky assholes, and that’s exactly what Vincent is. This is a classic Tom Cruise performance in that respect. The focus here is on Paul Newman’s Felson, though. We’ve seen what happened to him in The Hustler and what may have broken him. The second half of the film especially is Eddie Felson attempting to reclaim what he once had and, for various reasons, has lost.

Newman is always good, of course. There aren’t a lot of roles where he isn’t one of the most compelling things on the screen. Here, he slips into the role of Fast Eddie Felson almost as if he never left it. Felson comes across as a real character, probably the most real character in the film. There’s always a great deal going on behind the glasses he wears, a lot that just barely reaches the surface. It’s a very good performance, despite what it seems like I may have implied at the top. Of course, “very good performance” is generally expected from Paul Newman.

What’s really interesting here is the way in which the pool games are filmed. There are some interesting camera tricks and some very close focus on the pool balls colliding and rolling into pockets. Scorsese films the pool games like action sequences, and it’s surprisingly effective. The soundtrack is also used well; it’s an added bonus to get a Warren Zevon track in the middle of the film. Honestly, that’s always going to raise the film a little in my estimation.

The Color of Money is never going to be much more than a simply serviceable film, though. It’s good for what it is. The performances are good all the way through and I like the way it is filmed. The plot is pretty standard fare, though. There aren’t a lot of surprises from start to finish, and that’s a little disappointing. Additionally, it’s attempting to be a sequel to a great film from a previous generation, and that’s going to work against it on some level as well.

Still, it’s not bad. I’m glad I finally watched it.

Why to watch The Color of Money: Not much that Paul Newman did is a waste of your time.
Why not to watch: Newman was so much better so many times.

Posted by SJHoneywell at 9:15 PM