If It's Thursday, This Must Be Italy 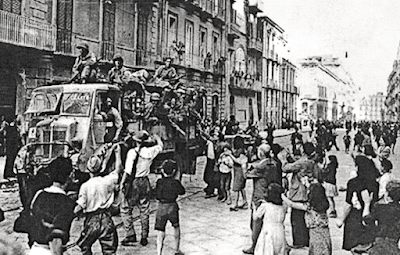 Sometimes, I can’t always get a great version of a film to watch. That’s certainly the case with The Four Days of Naples (or Le Quattro Giornate di Napoli in the original Italian). The copy of the film that I found was a bit grainy, which I can deal with. A bigger problem was the inconsistent subtitles. There are chunks of the film that don’t have any subtitles, so the screen is filled with shouting Italians saying things that I can’t understand. I get that they are excited or angry or at least passionate, but I’m not always sure of the specifics of those emotions.

That said, The Four Days of Naples tells a truly interesting story. The film takes place in the latter part of World War II, and as the story opens, Italy has surrendered to the Allies, causing a brief celebration among the people of Naples. The city lies about mid-way up the Italian boot, a touch north and west of the ruins of Pompeii and southeast of Rome. So, while the Allies are marching up the Italian countryside, they haven’t reached Naples yet.

The celebration is short-lived. Since there is a large German presence in the area, the Germans take over, instituting martial law. This is kicked off with the summary execution of an Italian sailor who made the mistake of splashing a German soldier with water as a joke. Shortly after this, many of the men of the city are conscripted to be sent off to work camps to continue fighting and toiling for the Reich. Slowly, the citizens start mounting a counter offensive, hoping to remove the German yoke rather than waiting for the Allied troops to liberate the city.

As the Italians begin resisting more heavily, the German response is to execute hostages that they have taken at a rate of 5-to-1. With 10 Germans killed, executions are planned for 50 Italian detainees to be selected at random. This goes poorly, since the Neapolitan populace has gotten wind and has men with guns stationed on buildings overlooking the execution spot. What follows is a protracted battle for the streets and buildings of Naples. While the German occupiers have discipline, weapons, and training, the Italians are fighting for their homes and families, and have superior numbers.

It’s a great story and made better and more interesting by virtue of being based on reality. The people of Naples really did revolt against German occupation and fought their occupiers in the streets for four days. The battle ended in a victory for the Neapolitan people, who demanded only that the German troops leave the city. Victory was claimed by the Italians on September 30, and the Allied troops arrived in the city the following day.

I think it’s also interesting that the entire cast of the film is officially uncredited. While many of the actors are known, they are not given credit for playing specific characters anywhere in the film. The idea was to honor the actual people who fought and died while evicting the German troops, so each actor remained uncredited so as to not steal some of that acclaim. I have to say that that’s pretty cool.

My issues here are much more with the version of the film that I found. I was generally able to follow along pretty well, but there were moments when, aside from knowing who was Italian and who wasn’t, that I couldn’t really follow the specifics of the action. Both the blurry print and the meager subtitles made following any nuance or character development spotty at best. Because of this, The Four Days of Naples became little more than a series of firefights with a recognizable face dying now and then. It was difficult to be really emotionally involved with much that was happening beyond wanting the Italians to win.

Sadly, I don’t have a lot more to say about it because I found it difficult to care about specific characters or their lives. It’s easy to work up sympathy for people in that situation in general, but more difficult to be sympathetic to specific things. There’s a star-crossed couple involved in the film, for instance, and I’m not entirely sure of their relationship. I think she’s married to someone else, and perhaps he is as well, but only about 40% of their conversations were subtitled.

It would likely be better with more complete subtitles. Until then, though, it’s just something of a curiosity. It's also worth noting that The Four Days of Naples was nominated for the 1962 Best Foreign Language Feature, and Best Original Screenplay in 1963.

Why to watch The Four Days of Naples: A great story.
Why not to watch: It’s not that easy to follow in places.