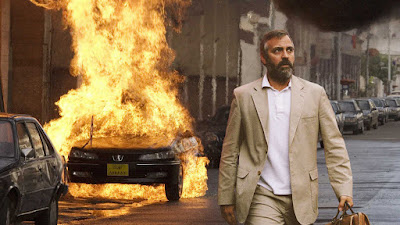 I seriously do not understand AMPAS. The closing credits of Syriana say that it was based on a book, and yet it was nominated for Best Original Screenplay. Seriously, I simply don’t understand how something like that happens. It certainly cheapens the idea of the specific categories if a movie that is specifically based on a book can somehow be nominated for original screenplay simply because the production company wants it nominated for that award.

Anyway, Syriana is one of those movies like Babel that has a bunch of different stories all circling the same set of issues. The early and mid-2000s seem rife with films like this: Crash and Traffic spring to mind. It was as if everyone suddenly decided they wanted to make Soderbergh movies, or perhaps there was a sudden revival of interest in Robert Altman. Movies like this are certainly potentially entertaining, but they are also a pain in the ass for someone like me, who tends to focus on narrative structure. I don’t know that Syriana is easily summarized.

Syriana is equal parts oil and corruption. A small oil company has gotten access to oil fields in Kazakhstan just as a larger company is losing access to key fields in the Middle East. Worse, for American interests, the foreign minister of the country in question, Prince Nasir (Alexander Siddig) has granted the access to these natural gas fields not to another American company, but to the Chinese, which sets off the American government. To compensate for the loss, the larger American oil company has begun a merger with the smaller company to gain access to those Kazakh fields.

>> That’s the basics. Swirling around all of this are several stories that either go straight to the heart of the corruption at hand or approach that story tangentially. Syriana is one of those films where all of the stories are different parts of the same whole, but each one is essentially segregated from the other parts. Very rarely do two characters in one story interact with anyone from a different story, and when that does happen, it happens very briefly and, except for in the closing moments, with very little impact on anything really happening. So, here’s the breakdown of what you’ll need to look for:

• American energy analyst Bryan Woodman (Matt Damon) is sent to meet with the emir of the country giving gas access to China. In a freak accident, Woodman’s son is killed. Out of sympathy, Woodman becomes Prince Nasir’s economic advisor. Nasir would like to institute reforms in his country, but it remains in question who his father will pass on the leadership to on his death, the reformer Nasir or the more traditional younger son. Despite American noises to the contrary, the U.S. favors the younger son, since this will likely help fuel prices in the U.S.
• Bob Barnes (George Clooney, who won a Best Supporting Actor Oscar for this role) works for the CIA and specializes in the Middle East. To help influence the decision of the aforementioned emir, Barnes is charged with assassinating Nasir. He goes to a man named Mussawi (Mark Strong) for help only to discover that Mussawi is now an Iranian agent.
• While the merger of the two oil companies gets underway, high-powered lawyer Dean Whiting (Christopher Plummer) sets one of his team members to look at the aspects of the transaction. This attorney, Bennett Holiday (Jeffrey Wright) discovers corruption all the way through the deal. • Finally, no movie made in the mid-2000s that involves the Middle East at all would be complete without an Islam storyline. A young man named Wassim (Mazhar Munir) is laid off his oil field job and must either find work or leave the country, since he is Pakistani. In an effort to find work, he joins a Muslim school to learn Arabic. Here he encounters a dangerous, fundamentalist sect of Islam and begins training for a suicide bombing mission.

There’s a lot to keep track of. Syriana is well-made, but it jumps around a great deal and I admit that I found the film confusing for the first 20 minutes or so because I had no idea what was going on. That’s not a serious issue for some movies. I expect, for instance, to be at least a little confused by mysteries and some thriller/horror films initially, since discovering what is happening tends to be a part of the audience’s role in those films. While the deep structure of all of these plots is certainly something to be discovered in Syriana, the basic story isn’t, so I found this to be unnecessarily convoluted at the start.

Syriana’s greatest strength is also its greatest weakness. It’s a polarizing film, and it is because it is also polemical. If you are someone who thinks that capitalism breeds corruption and that murder is never really out of the wheelhouse for people in power wanting to gain more power, Syriana serves as a justification for those beliefs. If you believe the opposite, Syriana will likely strike you as strident anti-Americanism.

It’s well-made, though, and well cast. I’ve hit a lot of the names in the film, but it also features roles from Chris Cooper, Amanda Peet, William Hurt, Tim Blake Nelson, and a minute or two of Viola Davis.

Syriana is a good film, if perhaps not a great one. It’s a film that will anger you, though. You’ll either be angry at what you think is a realistic depiction of the corruption that runs rampant in the world of high finance and power, or you’ll be angry at what you see as a corruption of the real situation. Either way, prepare to be pissed off at the film’s conclusion.

Why to watch Syriana: The sort of cast fledgling directors dream of having one day.
Why not to watch: It takes half an hour to get interesting.