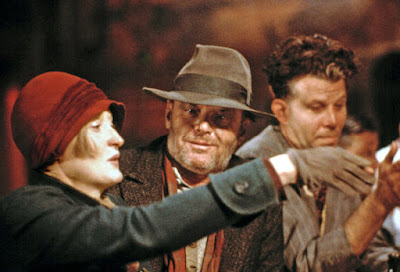 I’d love to tell you that Ironweed is a fun-filled romp of joy and happiness, but it is completely the opposite. This is one of those movies I have dubbed a “misery parfait” in the past, a film in which nothing good happens to anyone, and there is little but layers of sadness and misery piled one atop the other. That it stars both Jack Nicholson and Meryl Streep only means that the misery we witness is going to be acted about as well as it can be. It’s not going to make it any easier to experience, but it is at least going to be done well.

It’s evident right from the start that we are in for this sort of experience. Francis Phelan (Nicholson) is a bum who has wandered around the country for a few decades. Now, in 1938 around Halloween, he has returned to Albany, NY, his old home town. Over the course of the first act, we learn a few things about Francis. We learn that he was married and had children, but abandoned his family because he dropped his infant son, killing him.

Since those days, Fran has moved from place to place, working day jobs and wasting himself with drink. While never formally divorced, Fran has spent years off and on with Helen Archer (Meryl Streep), a former singer who has fallen on equally hard times. In these opening moments, we also meet Fran’s friend Rudy (Tom Waites), who has just been diagnosed with cancer and given six months to live, six months he probably won’t see because of his own homelessness and drinking. Eventually, we learn that Fran was once a very successful baseball player, having played with the Washington Senators before falling to his current low state.

In all honesty, things aren’t going to get a lot better from here. We’re going to see life through the eyes and experiences of Francis and Helen for a couple of days as Francis attempts to come to terms with his past and with the decisions he has made. This is very much Fran’s story. Helen’s part in the story is important, particularly with what we learn she has to do to not merely survive but to simply find a place to sleep for the night, but since we learn very little of what happened to her to bring her to this circumstance, her story is more or less a companion to Fran’s and a sort of reflection of it.

Through the course of the day or so the film covers, Fran and Helen will encounter a number of people they have known before. They connect at a mission where they also encounter some other old companions. They hear of a former singer named Oscar Reo (Fred Gwynne) who Fran knew and Helen idolized running a club, and go there for drinks and for Helen to attempt to sing a song.

It’s this scene that is most notable in many respects. Throughout the film, we’re given something like dream sequences, mainly for Fran. Fran relives moments of his past (and is played by Frank Whaley in these scenes), that seem to be visiting him as hallucinations in the present. He speaks with people long dead, including a streetcar conductor (Nathan Lane) he once killed accidentally. This is Fran’s attempt to come to terms with his past.

But when Helen sings in the club, we’re given something different. What we see is how the scene plays out in Helen’s mind. The audience of the club becomes a little classier, although Helen herself doesn’t change and her clothing stays the same tattered rags that she has been wearing. What really changes is her voice. We see the scene as she sees it, her with all of the strength and power of her talent in her heyday. And then we return to reality and see the real wreck that Helen has become, her talent all but gone.

Much of the end of the film concerns Fran’s return to his home, where he has not been for more than two decades. He meets his wife Annie (Caroll Baker) and his now-grown son Billy (Michael O’Keefe) and attempts to reconnect with them as best he can, dealing not only with the years of separation but the guilt, shame, and resentment his disappearance has caused.

Ironweed seems to exist as a reminder that Jack Nicholson can do more than just be Jack Nicholson on screen and that Meryl Streep can do pretty much anything that someone asks of her. Nicholson is as good as he has ever been and playing a role that is significantly different from those that he typically excels in. I do wonder that Meryl Streep was nominated for Best Actress here; the role seems much more supporting than anything else. It’s an odd case of category inflation.

Ironweed is not a film I plan to revisit anytime soon. It’s far too depressing and brutal for me to want to sit through it again, especially at the length it runs. Really, it’s the fact that it’s close to two-and-a-half hours of misery more than that it’s misery that would keep me from spending time with it again.

Why to watch Ironweed: An acting class from Nicholson and Streep.
Why not to watch: Holy shit, is it depressing.

Posted by SJHoneywell at 3:20 PM