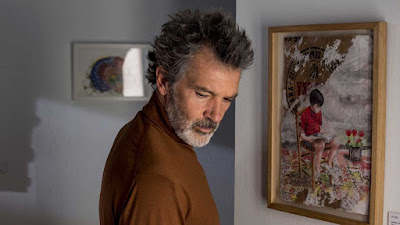 There are times when I feel like I have about a dozen different ways to start one of these reviews but don’t know what to say beyond that. When talking about Pain and Glory (or Dolor y Gloria, if you prefer), do I start with the fact that Almodovar was always seemed like the male director most attuned to women is doing a film about a man? Do I bring up the librarian I used to work with who loved Almodovar enough that she called him “My Pedro”? Do I talk about the fact that I will happily watch anything with Penelope Cruz in it?

The place to really start with Pain and Glory is to say that it feels in a sense like Almodovar is doing a riff on 8 ½. While I assume that not everything here is autobiographical, the man we will be spending all of our time with, Salvador Mallo (Antonio Banderas), is a gay film director. How much of Mallo’s other afflictions and problems are shared by Almodovar, I have no idea. He might well have a series of chronic pains and health problems. He might find himself unable to think of a new subject for a film (although the existence of this film belies that problem). I am relatively confident in suggesting that he doesn’t spend a great deal of his time smoking heroin.

Since this is really a character study, the plot that we are presented with is paper-thin. A film of Mallo’s from 30 or so years previous has been remastered, and for the first time since its premiere, he has watched it. This viewing has caused a re-evaluation of the film from his perspective. He originally clashed with his lead actor, Alberto Crespo (Asier Etxeandia) over his interpretation of the character as well as Crespo’s continual heroin use. But now, he has a desire to reconnect with Crespo. In so doing, he confronts elements of his past, deals with a list of chronic ailments, and beings smoking heroin, thanks to Crespo. That’s pretty much it.

When we’re not in the present with Mallo and his various problems, we’re in the past, rediscovering his childhood (where he is played by Asier Flores). We learn of his poor upbringing, his love of film, and his time spent with his mother (Penelope Cruz). In other flashbacks that go just a couple of years, his mother is near death (and played by Julieta Serrano), dealing with her own mortality. These sections of the film come across not as Almodovar doing 8 ½, but as Almodovar exploring Amarcord territory.

But this is really at that is here in terms of story. Pain and Glory is not an exploration of story, but more an exploration of the man at the center of his art. Salvador Mallo in the film has become not a collection of his stories, but a result of his maladies and pains. When Crespo wants to put one of his story/mediations on the stage, Mallo eventually relents. This causes him to reconnect with an old lover (who was also a heroin addict at the time) and reconcile with him, exorcising a number of his demons.

Ultimately, Pain and Glory is a film about catharsis in many ways. The end of the film is purely cathartic in that sense, with Salvador attempting to continue exorcising his demons by confronting his physical maladies head on and finally discovering ways to treat them. In many respects, Pain and Glory is also about confronting that fear, that despair that comes from not knowing (a mass has been found in his esophagus, but what it is is unknown) and the fear that comes from not wanting to find out. Salvador’s descent into heroin addiction is just another aspect of that same despair and fear. He uses it as a way to stop the pain he is in, but ends up using it more to reconnect with his past.

Pain and Glory is slow and meditative, but never boring. Antonio Banderas, frankly, has become one of the best actors to come from Europe in the last 50 years. He began his career in action and heartthrob roles and has matured into someone capable of the measured and capable performance given here. He’s always believable in this role, and always the most compelling thing on the screen.

Because there’s not a great deal of story here, Pain and Glory is not a film I would choose to watch that often, but I’m happy I had the opportunity to see it.

Why to watch Pain and Glory: You should watch as much of Almodovar’s output as you can.
Why not to watch: It’s a character study much more than it’s a movie with a plot.

Posted by SJHoneywell at 7:26 PM