Down and Out in Hong Kong 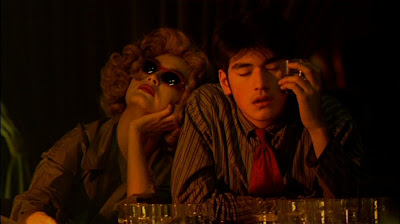 Most of the time when I watch a film on the list, I have a good idea of what I want to say about it, either good or bad. This is not the case with Chong Qing Sen Lin (Chungking Express). Actually two complete stories, the film depicts two sort-of romances, neither of which reach anything like a real conclusion, at least not on screen. Both romances involve cops who have recently been jilted by their long-time girlfriends. But there the similarities end.

The first story concerns a cop with badge number 223. His name is He Qiwu (Takeshi Kaneshiro), and his girlfriend May has left him. However, she left him on April Fool’s day, so he’s not sure if she’s serious or not. He decides to give her a month to come back to him, buying a can of sliced pineapple with a May 1 expiration date every day until then. When she doesn’t return to him on May 1, which is also his birthday, he eats all 30 cans and goes to a bar.

It’s here that he meets the mysterious woman in the blonde wig (Brigitte Lin). He decides that he will fall in love with the next woman who walks into the bar, and it’s her. She’s not really interested in him, or anything, though, because she’s got too much on her mind. What she isn’t telling him (and it’s a good thing, because he’s a cop) is that she is a heroin smuggler, and that her three mules have disappeared with a good chunk of her money, and with the heroin stashed in their clothing, shoes, bodies (a nice scene involving men walking uncomfortably out of the bathroom while she fills condoms with drugs) and expensive electronics. Like Qiwu, she has a May 1 deadline—find the mules or else.

So that’s the set up here—we have a cop obsessed with his ex and willing to do anything to forget her, even to the point of not noticing that the woman he is obsessing over now is a wanted criminal with two murders that we’ve seen on her head. They leave the bar together, go back to his place, and she sleeps. He performs a minor act of kindness for her—he polishes her shoes. She performs one for him—she wishes him a happy birthday. And then they go their own ways. He jogs so that his body doesn’t have enough water for tears, and she…well, she clears up that problem she has with her connection.

We shift stories when Qiwu bumps into Faye (Faye Wong) at a cheap carry out place he frequents. He walks off, and we are introduced to our fourth main character, Cop 633 (Tony Leung Chiu-Wai), whose real name we never learn. He stops by the carry out every evening and orders a chef salad for his girlfriend from the shop’s owner (Chan Kam-Chuen). He’s convinced to bring her something different, and a few days later, she tells him that she’s looking for something different in a man as well.

Faye is intrigued by this attractive cop, and when the ex girlfriend, a stewardess (Valerie Chow) drops off a short Dear John with his apartment key at the take-out. Faye keeps the letter and starts invading his apartment when he isn’t there. While there, she plays with his objects, cleans things up and replaces a few things as well. He, despite his job and the requirement to be observant, doesn’t notice. Instead, he’s lonely enough that he talks to his objects as if they are people—finding it strange that his old skinny bar of soap is now new and fate and that his dish rag is now no longer filled with holes.

Eventually, the two attempt to meet, but before she commits herself to 633, she goes off and sees the world. They connect again at the end of the film, but their future together is unclear.

And that’s really all there is here. There’s not a whole ton of story. Instead, we’ve got characters, at least three of whom are trying to make their way through Hong Kong without being alone. There is a sense of loneliness, a pang and desire of wanting to be together with someone throughout the film, particularly when we spend time with the two cops. What we have is character study, the story of people.

For being mainly plotless and loose at all ends, Chong Qing Sen Lin is surprisingly effective and pretty. This is not a movie to watch because of stunts or plot, but one to watch because it is a film that succeeds in many ways despite its limitations. I don’t want to imply that Wong Kar Wai is somehow limited as a director here—this is actually a great introduction to his major themes and his style. It simply isn’t a traditional movie. It’s a cut out of the lives of four people that bump into each other tangentially. We get no resolution, no feeling that these people will end up happy, or satisfied, or in at least one case, even alive tomorrow. And it works despite this. It needs to be watched more than once—I frequently skipped back and watched scenes a second time, making the experience much longer than its less-than-two-hour running time.

Faye Wong is pretty as a leading woman should be, but she has an annoying habit of looking not at the character she is speaking to, but swinging her head around to focus on that character for a second before looking elsewhere. It’s in character—she doesn’t know what she wants and is terrified of commitment, so this constant looking is a reminder of that. But it drives me to absolute distraction.

When this film was originally released in the states, it came out under Quentin Tarantino’s banner, which may have done it more harm than good. People expect a particular thing out of a film with Tarantino’s stamp on it, and Chong Qing Sen Lin has maybe five minutes of that sort of footage throughout. While that may have initially attracted an audience to the film, I imagine that much of that audience walked away confused rather than intrigued. Oddly, it gives me a whole new level of respect for Tarantino.

Why to watch Chong Qing Sen Len: Less plot, more character, and all character development.
Why not to watch: Halfway through, most of the characters change.
Posted by SJHoneywell at 3:01 PM