Sucking, but not Blood 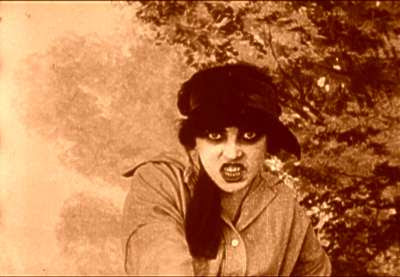 The other day, I was lying on my bed watching part #I don’t remember of Les Vampires (The Vampires) when my seven-year-old asked me what I was doing. I told her and she remarked, “Who would ever make a film that long?” For a moment, I tried to explain exactly what a serial was—that it wasn’t intended to be watched straight through, but then I stopped. The kid had a point.

With a film that covers this much time, it’s impossible to really come up with a legitimate synopsis that will do justice to the entire tale. It’s far easier to just hit the high points in terms of the characters and go from there. We have three teams of people: the good guys, the bad guys, and the ones who fall in the middle. You can root for whomever you wish, but the film sure isn’t named after the good guys.

The forces of right and law are personified mainly in the character of Phillipe Guerande (Edouard Mathe), who is a reporter for a Parisian newspaper. Specifically, he is covering the story concerning “The Vampires,” and he seems to be the driving force behind the investigation. His job appears to consist of writing a single sentence every day, at least based on what we’re shown. Working against him at first, then working whole-heartedly for him is Mazamette (Marcel Levesque). More on him later. Aside from the police, rounding out the good squad are Guerand’s mother (Delphine Renot) and, in the last two films, his fiancée, Jane (Louise Legrange) and her mother (Jeanne Marie-Laurent). Mazamette also has a son named Eustache (Bout-de-Zan), who appears in a single episode.

Then there are the bad guys. The bulk of the bad guys are the Vampires themselves, and I probably should have mentioned earlier that they aren’t real vampires, but rather a gang of thieves and killers who tend to dress in black leotards. The Vampire we spend the most time with is Irma Vep (Musidora), whose name is an anagram of “vampire.” Originally, she works for the Grand Vampire (Jean Ayme), who also goes under a bunch of aliases. Eventually, he is replaced by Satanas (Louis Leubas), and Satanas is replaced by Venomous (Moriss). There are tons of other Vampires as well, but they don’t figure into the story as much but cannon fodder. Additionally, there’s another gang of thieves led by a guy named Moreno (Fernand Hermann). He starts out against the Vampires at first, and is then eventually is coerced into joining forces with them.

There are also neutral parties, most of whom only show up for part of one of the 10 episodes of this film. There’s a dancer, an American millionaire, and a few others who essentially play victims, patsies, and people to be rescued.

With something of this length and number of episodes, it’s impossible to give even the most general plot overview. Guerande reports on the doings of the Vampires and does everything he can to help catch them, and the Vampires do everything they can to steal money, kill people, and eliminate Guerande and those he loves. That’s pretty much it. It seems like every room in every house has a secret door or a hidden way in. At a couple of points, Satanas wheels out a friggin’ cannon from a secret compartment and starts blasting away.

More to the point, over and over again, people sneak into somewhere and hide so that they can surprise the people they are waiting for. Over and over again, despite the evident network of tunnels, secret passages, and everything up to and including human-sized air ducts, people simply stand behind curtains. You’d think that people who are up to nefarious criminal activity or who have foiled a couple of dozen assassination attempts would start, y’know, looking behind the curtains every now and then, or maybe just taking them down to reduce the number of possible hiding spaces, but no one ever does.

Guerande, over and over, is saved from death not by his own ingenuity or skill but through pure, blind luck. Frequently this comes in the person of Mazamette, who always happens to be in the right place at the right time. He recognizes the right person, or happens to be walking past when the Vampires do something bad. He begins the film as a comic relief character, and apparently no one bothered to tell the actor that eventually Mazamette changes his allegiance from the Vampires to the good guys, because he’s always played as comic relief. This guy mugs for the camera more than Chris Kattan and Rob Schneider combined. His most common and annoying habit is looking at something, then looking directly at the audience as if to confirm what he is seeing. The fourth wall doesn’t exist for M. Marcel Levesque, evidently. Initially, I thought he was looking at the director to be told what to do next, but it’s soon evident that he’s trying to share a joke with his audience. Didn’t work. He looks like a douche.

If you plan on watching Les Vampires, prepare yourself for a rough ride. The film is interminable. In fact, the only really good thing about it is that it is intended to be watched episodically, which means you have an excuse other than pure frustration to get up and walk away from it and to take a week to get through it. By the last episode, I was watching in five-minute bursts, and rocking in my seat, praying for the end.

Everything is overfilmed. We see someone climb up the side of a building. Great. We’ve learned as movie watchers that if we see someone starting to climb a building, a jump cut of that person on the top of the building lets us all know that the person climbed it. Not so our director here. If someone’s going to climb the side of a building, we’re going to see the whole damn thing. If someone makes a getaway across rooftops, it will not do until we’ve seen them run across at least four roofs.

I took three pages of notes on this to keep it straight over the week I watched it. I don’t know why at this point. Looking back through them, my favorite comments are these: “Guerande—what a dick,” the notation that at their engagement party, Guerande and Jane have a dish on the menu called “Little Bitty Bits,” and that at one point, Irma goes sneaking into a hotel room dressed in a black leotard for silence and shadow and is also wearing humongous chunky shoes that look like they’d make stampede noises on the floor. 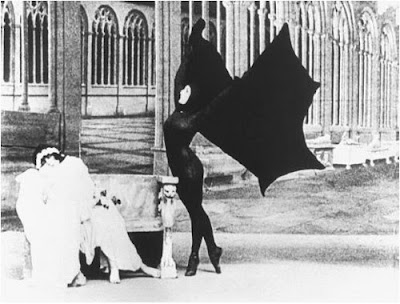 Two final things—it’s clear throughout that the bad guys are the real stars here. Irma Vep is the only really compelling character, followed perhaps by Moreno. Second is that by far the most famous still from this film is the woman on the bench being menaced by a leotard-clad woman with bat wings (above). Time and time again, the woman in the leotard is named as Irma Vep. It’s not. The woman in the leotard is a dancer named Marfa in the episode named “The Ring that Kills.” How do we know the ring kills? Because Marfa gets stuck with it, and dies about 30 seconds after that still. It seems that even when trying to justify the value of this lengthy stink bomb, the people on the side of “great film” can’t force themselves to watch it long enough to get their facts straight.

Why to watch Les Vampires: One of the first true serial films.
Why not to watch: A constant desire to check one’s watch.
Posted by SJHoneywell at 10:21 PM