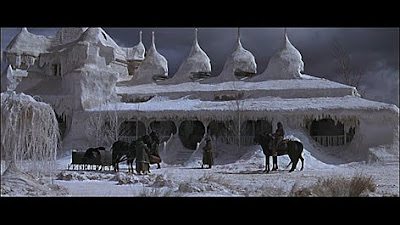 The epic romance is a style from a bygone age. Dr. Zhivago, based on the novel of the same name by Boris Pasternak, is one of the last epic romances on the grand old scale. A true epic takes place on a grand scale against a massive backdrop, usually of war and usually with huge, sweeping expanses of land. Since this story takes place across the years of World War I and the Bolshevik Revolution, the scale doesn’t get much grander.

We start, as many films of this sort do, at the end of things, with a Bolshevik general named Yevgraf (Alec Guinness) looking for his niece. The girl, who might be the right one, is brought to him, and he begins to tell her the tale of his half-brother, Yuri Zhivago (Omar Sharif). Yuri’s mother died when he was very young, and he was taken to Moscow by an adoptive family that includes Tonya (Geraldine Chaplin).

Yuri grows up to be a competent doctor as well as an acclaimed poet. He becomes engaged to Tonya around the time of World War I. Simultaneously, we are introduced to Lara (Julie Christie), a young woman who is enamored of a Bolshevik named Pasha (Tom Courtenay), in part because of his great passion.

The two meet for the first time when Lara’s mother attempts suicide and Yuri is one of the two who attends her. He is immediately smitten with the girl, but also discovers another rival in the form of Komarovsky (Rod Steiger), who acts as a sort of protector for Lara and her mother. He refuses to give his blessing to a marriage between Lara and Pasha, and takes it upon himself to essentially rape the girl as a way of exerting her dominance. She shoots Komarovsky during a Christmas party, and Zhivago watches her led out of the hall by Pasha and out of his life.

The war begins, and Yuri is posted to the Ukraine where he encounters Lara once again. She acts as his nurse while he tends to the troops, and they become quite close, but not in the Biblical sense. Back in Moscow, the situation has changed with the capture of the tsar and the Bolshevik Revolution. Yuri meets with Yevgraf, who manages to smuggle the family out of Moscow and out to a family estate in Varykino.

Here, naturally, Zhivago meets Lara again after first encountering Sasha, who now goes by the name of Strelnikov, and is quite the player in the Red (Bolshevik) Army. For the first time, their obvious love kindles into something much more despite the fact that Tonya is pregnant. No longer able to live with the affair, he breaks things off with Lara, but is captured by partisans and is forced to serve with them for nearly two years. He deserts and makes his way back to Varykino only to discover that his family is gone. However, Lara is still there, and she rescues him. They encounter Komarovsky again, who offers to take them to Vladivostok on the Pacific coast, but they refuse.

Of course, like the players in any great romance, both Lara and Yuri are doomed, in part because of the events that surround them and in part because of their great love for each other, forbidden by their marriages to other people. And yet, in the vast sweep of the conflict where people are lost and unaccounted for, they live a life together filled with the sort of romance that people generally only dream of, burning terribly for each other constantly. Of course they are forced to separate eventually, and of course, their passion is what continues to drive them and eventually proves to be the thing that destroys them, only in the most impossibly romantic way.

The cinematography is, of course, as lovely and grand as you might expect from someone with David Lean’s reputation and track record. The film is truly grand, and it’s grand in no small part because of the huge expanses of Russian countryside filled with trees, empty spaces, and acres upon acres of white, glistening snow.

Despite this, it’s not the vast expanses of Russian steppes that I remember, but the close ups, particularly of Omar Sharif, with his eyes glistening with tears, shining in whatever ambient light happens to be available. Seriously, the man is read to cry so often that he’s almost a leaking faucet. Everything he does reminds him of this great love of his life or the injustices he sees under the Bolshevik system, and these things cause tears to well up in his eyes constantly.

Doctor Zhivago is the story of this great love. It’s also really freakin’ long for the story it tells. I had trouble more than once keeping my eyes open through some of the passages. It’s not that the story isn’t gripping in its own way, but the epic sweep, while impressive, doesn’t strike me as being entirely necessary for a boy-loves-girl, loses-finds-loses girl story.

Ultimately, I can’t get past those glistening eyes. Zhivago’s passion more often than not comes off as a weepy bitch. Great and grand, but not in the way I was hoping. And prepare to hear that damned balalaika version of "Lara's Theme" in your head for the rest of your life.

Why to watch Dr. Zhivago : Epic sweep and romance on a grand scale.
Why not to watch: Three-plus hours of shining-eyed close up.
Posted by SJHoneywell at 11:50 PM