What Not to Do in a Haunted House 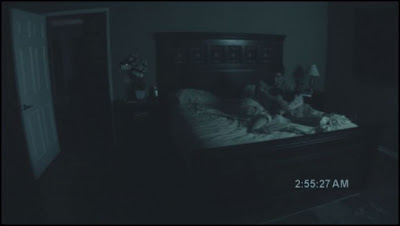 This brings us to Paranormal Activity, one of the newest entrants onto The List. This film is noteworthy because it’s another example of a film that made a truckload of cash on a shoestring of a shoestring budget, the entire thing being filmed for an alleged $15,000 and making something like $9 million in its first week. Those are numbers that make film execs sit up straight in their chairs.

This is the story of a young unmarried couple living in a starter home in San Diego. They’ve suddenly be plagued with what appears to be a haunting. We learn quickly that Katie (Katie Featherston) has experienced this before when she was a child and off and on since then. Her partner, Micah (Micah Sloat, and pronounced MEE-kah) is disturbed that he didn’t know anything about this before he moved in with Katie. They bring in an expert on the paranormal (Mark Fredrichs), who tells them that there is something going on and recommends that they don’t try to make contact with whatever entity is in the house—and that the entity is obviously focused on Katie.

Katie’s problem is that Micah is not taking things seriously. He takes things seriously enough to start filming things around the house, particularly their bedroom at night, and we soon start to see evidence that something is indeed going on. The door moves on its own accord one night, and another night they are awakened by a scream. Micah manages to record some EVP growls as well.

Things really start changing when it becomes evident that Katie spends some nights standing next to the bed staring at Micah. When Micah goes against her wishes and brings in a Ouija board, things start to change again. The planchette moves on its own and the board lights on fire for a few moments before going out. So there’s no question that there is something very dire going on in the house. Micah’s experiment with baby powder that reveals non-human footprints in the hallway shows that it’s likely that whatever is plaguing Katie is demonic.

And this is where I start to have issues with films like Paranormal Activity. With all of this evidence piling up that there is something going on in the house and with Katie, and their reaction to all of this is to stay in the house and continue to act like this is a problem that they can solve and work out on their own. In short, they act exactly like someone with an ounce of intelligence would not act; a sort of unnatural bravery that exists in movies and nowhere else.

Is the film scary? Certainly there are some parts of it that are decidedly creepy and disturbing. While made on a small budget with essentially first-time actors, the film is still professionally made and exhibits a level of quality that distinguishes it from an amateur production. From a personal standpoint, it helps that frequently the camera is placed on a tripod so I don’t have to live with the shaky camera thing, which tends to give me motion sickness (as in Blair Witch or Cloverfield). It’s not the low budget that bothers me here—it’s the way the people react to the events surrounding them.

In a film like this one, the characters in the film essentially deserve what they get. A horrible, terrifying, frightening event happens in their house in the middle of the night, and then they spend the next night in the same place, changing nothing. I understand why the parents in Poltergeist stay in the house; their daughter is missing. I don’t understand why Micah stays in the house at night with Katie, when everything seems to be connected to her. Both Katie and Micah deserve their fate.

This leaves me in something of a quandary. Oren Peli is a smart filmmaker, and this film is evidence of that. Rather than making it obvious that this is a film made on the cheap, he has created a film that looks far more expensive than it really is. Rather than making it obvious that this film was made with no budget, he works within the small budget he has. Paranormal Activity delivers scares in the old fashioned way, reminiscent of The Haunting in that for most of the film, nothing is shown and much is done with sound. That’s all to the good.

But the characters act so stupidly, so blindly walking into their fate, that I have trouble thinking they deserve better in the end. If Peli really wanted the ending he has on this film, he should have figured out a way to get there without giving Micah the self-preservation skills of a deficient lemming on the side of a cliff.

Why to watch Paranormal: Smart filmmaker.
Why not to watch: Dumb characters.
Posted by SJHoneywell at 2:51 PM