If you had asked me a year ago what I knew about Krzysztof Kieslowski, I’d have said that he had at least one too many “z’s” in his first name and I’d have been done at that. Ask me that same question now, and I’ll tell you that he’s a director that more people should know about and that his use of camera, light, and color is some of the best in cinematic history. After watching all of Dekalog last year and being suitably impressed by it, I was excited to take another spin through Kieslowski’s world with two-thirds of his “Three Colors” trilogy.

The concept behind the trilogy is an interesting one. Using the three colors of the French flag (blue, white, and red from left to right) and the three words of the French revolution (liberte (liberty), egalite (equality), fraternite (brotherhood), Kieslowski made three films, two of which appear on the 1001 Movies list. These are Trois Couleurs: Bleu (Three Colors: Blue, or more commonly Blue), the first of the trilogy and Trois Couleurs: Rouge (Three Colors: Red, or Red to its friends), the third. 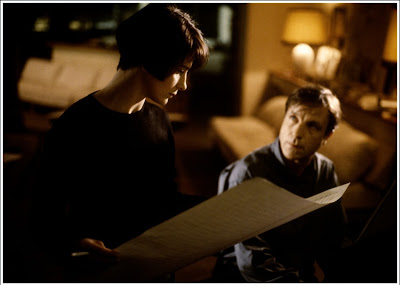 Blue starts in a way that I find disturbing. A family of three are driving happily down a road when the car goes out of control, hits a tree, and kills both the father and the daughter. Julie (Juliette Binoche) survives the crash, but attempts suicide in the hospital when she realizes her family is gone. Unable to go through with it (she can’t swallow the pills), she decides to take apart her life and not start over, but drop out completely.

This becomes impossible right from the start, though. Her husband was a well-known composer and was working on a symphony to celebrate the European Union. The work was unfinished, and a friend and musician named Olivier (Benoit Regent) wants to finish the score. Julie won’t let him. She takes the work from her husband’s conservatory and destroys it completely. She also removes all of her and her family’s belongings from the large house, closes it up, deeds all of her husband’s money to take care of her own mother, and moves to Paris.

In Paris, Julie attempts to cloister herself from humanity completely. She reverts to her maiden name and tells no one where she is. Even in this situation she is unable to completely avoid being a part of the world, though. She becomes involved in the affairs of one of her neighbors (Charlotte Very), a sex performer who the other building tenants attempt to oust because of her job. She also discovers that Olivier has another copy of her husband’s last score and is attempting to complete it. More significantly, she discovers that her husband had a mistress named Sandrine (Florence Pernel), and that the woman is pregnant with his child.

As the title of the film implies, this movie is awash in tones of blue. The one thing Julie saves is her daughter’s lamp of blue beads. She also swims frequently in a pool suffused in blue light. The film is equally suffused with her husband’s unfinished symphony, a piece of surprising strength and beauty, particularly as it jumps out in places when Julie is confronted by a piece of her past. Over and over she is reminded that while she may have her freedom, there are always things that tie her to who she was and who she will become.

The story of Blue is engaging as are the characters, but it is not this that causes me to recommend the film. What does is the almost surreal moments of the film when Julie realizes that she has not gotten completely rid of her old life and finds it intruding on her once again. These are regularly accompanied by the sudden orchestral hit of the unfinished symphony and most of the time by a suddenly black screen as if she herself is blacking out for a moment. The first of these, however, sees her suddenly lit by an intense blue light. The moment is a startling one, and extremely powerful. I’m man enough to admit that Julie’s sudden shock accompanied by almost painful blue light and the driving symphonic score literally made me gasp and sent a full-on chill down my back, even when watching on a little 8” screen. I went back to that scene several times after I finished the film, and it had the same effect on me each time.

There’s real magic in something that can elicit that powerful of an emotional and physical reaction time after time, even when it’s expected. Trois Couleurs: Bleu is demanding and powerful, and not to be missed. 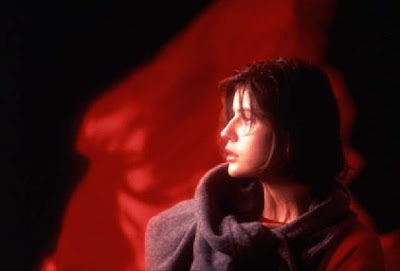 The completion of the “Three Colors” trilogy and Kieslowski’s last film is Red. Like Blue, this film’s dominant color scheme is the color of its title. Here, it appears everywhere—in furniture, on billboards, as the colors of food and cars and clothing. Just as we have moved along the flag in terms of colors, we have also moved along the French motto in terms of theme. Here, rather than liberty, the dominant message is one of fraternity.

Our heroine is Valentine (Irene Jacob), a part-time model and student in Geneva. Her boyfriend Michel, who appears only as a voice on the telephone, is in England and calls her frequently as if keeping tabs on her. It’s evident early on that Michel is either wildly jealous or incredibly insecure, or possibly both. He suspects her constantly of infidelity, assuming that if she isn’t at home and answering the phone when he calls that she is off with another man.

Valentine appears as the focus of a gum advertisement that appears in the middle of the film and also walks on a catwalk at a fashion show. While driving home, she hits a German shepherd and drives it to its owner, a reclusive former judge named Kern (Jean-Louis Trintignant). He seems uninterested in the dog and tells her that now it’s her dog. She takes the dog to the vet to discover that it will be fine and that it’s pregnant.

The dog causes her to take a certain interest in the judge, but this interest turns to disgust when she finds that the judge is in the habit of listening in to the phone conversations of his neighbors with a huge surveillance set. Almost as Michel is doing to her, the judge is doing to the neighbors. He knows all of their secrets, knows who is having an affair with whom, but he also refuses to act on the vast amount of knowledge he has.

While all of this is going on, we discover another story tied up in this one. Auguste (Jean-Pierre Lorit) is a law student having a romantic fling with Karin (Frederique Feder). According to the judge, she isn’t the right woman for him, though, and the affair will soon be over. His prediction proves true. He admits his surveillance to the neighbors and they press a case against him. In the course of the case, Karin meets another man, and Auguste catches them in flagrante.

It’s not until the very end that Valentine and Auguste meet despite a number of near misses (shades of Chungking Express from the same year), which is another dominant idea in the film—this idea of connection and missed connection to couple with the theme of brotherhood.

The ending, though, is beyond my ken. I’m not sure I understand exactly why the event that happens does, except that it serves as a way to not only get these two characters to finally stand in the same shot, but also to connect this film to the previous two of the trilogy. One nice touch is that our final shot of the film, of Valentine, is an almost exact duplicate of the shot we see of her throughout the film: the billboard for the gum.

Red may well be a better movie than Blue, but I liked Blue better. As a final comment, one aspect of both films that is absolutely worth paying attention to is the beautiful and butter-smooth camera work. Piotr Sobocinski earns as much of the credit for the overall look of these films as Kieslowski, and much of the power of them comes from his beautiful camera movements and shots.

Why to watch Trois Couleurs: Bleu: Startlingly beautiful.
Why not to watch: It’s over too soon.

Why to watch Trois Couleurs: Red: A new and interesting take on voyeurism.
Why not to watch: A strange resolution that sums up more than it needs to.
Posted by SJHoneywell at 11:30 PM