There's No Crying in Baseball 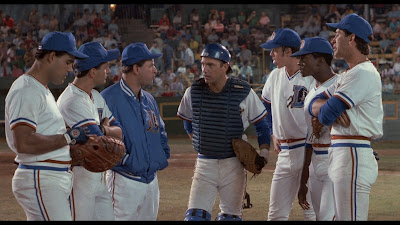 I’ve been making a concerted effort this month to really work on getting through not only some difficult films, but ones that are difficult to find and difficult to watch. I’ve been trying to challenge myself with films this month, and while that’s a good thing, it’s also exhausting. Since I had a full day off work today, it would’ve been sad had I not watched anything (that’s my Tuesday through the middle of March), I took a break in another way by watching a film I’ve seen a dozen times and love. In this case, that’s Bull Durham.

If you’ve never seen a minor league baseball game, or played a sport at any level, Bull Durham might pass over you in some respects, but maybe not—my wife likes this movie and was never much of an athlete. Frankly, I was never much of an athlete, either. Anyway, the film takes place across the length of one baseball season in Durham, North Carolina with the down-and-out Durham Bulls. On the team is a new bonus baby named Ebbie Calvin “Nuke” LaLoosh, who we’re told has a “million-dollar arm and a five-cent head.” Nuke is a hell of a pitcher, provided he can get the ball across the plate.

Brought in to take care of him, to nurse him through the ups and downs of being a minor league pitcher and attempt to turn him into a major league pitcher is minor league lifer “Crash” Davis (Kevin Costner). Crash is tired of being in the minors, disgusted with being back in A-League ball, and sick of the whole thing. But the draw of the game is too much for him, and he agrees to stick it out because as his new manager (Trey Wilson) says, it’s a chance to come to the park every day and get paid to do it. And there’s the fact that he’s close to setting the record for the most home runs in the minors despite the fact that the thinks setting that record would be a “dubious distinction.”

Also interested in these two ballplayers is Annie Savoy (Susan Sarandon). Annie, who works at the park during the summer and teaches part-time at the local junior college otherwise, is a baseball junkie and groupie. Her pattern is to hook up with one player every season and teach him the ins and outs of baseball and life (and gratify both of them sexually) until the end of the season, whereupon the player becomes a man and Annie moves on to her next player. Early in the film, she chooses Nuke when Crash walks out after one of the great speeches in film history, but there’s some evidence that both Crash and Annie think she made the wrong choice.

Anyway, the rest of the film concerns this odd little love triangle. Annie teaches Nuke what it means to be a man (yes, that way) and Crash tries to show him what he needs to do to succeed in the world of baseball. And there’s poetry, sex, fighting, baseball, a lot more sex, and perhaps a smattering of wisdom.

I’ll come clean here—I don’t have any love for baseball. It may be America’s pastime and the American game and on and on, ad infinitum, ad astra, but baseball frankly bores the crap out of me. I can’t watch a game for longer than a couple of batters before I wander away. But there is a real joy to this movie that is almost inexpressible. You can find something to enjoy here if you live and die with baseball or don’t ever watch a game.

There’s a lot here to love. For starters, the script feels right on, which is helped greatly by the fact that the writer/director Ron Shelton played in the Texas League. The characters come across as real as well. Most importantly, the events really come across as real. This is not a stereotypical sports film in which a team of wacky misfits who don’t have a shot at winning the big game come together and win the big game over a group of vastly superior players. Nuke ends up going to the big leagues, but does so after a loss, and Crash isn’t brought up with him as some sort of reward for his great service. Instead, his job with Nuke done, he’s cut from the team, just as he really would be.

In other words, Bull Durham is everything you want in a movie on its surface. It’s a funny film with a number of classic scenes and classic lines. Crash telling Nuke to aim a pitch at the bull mascot to freak out the other team is pitch perfect, as are the scenes where, when Nuke shakes off his pitch signs, he tells the batter on the opposing team what pitch is coming next. Everything from the sports angle works here, as do the three relationships involved—Nuke and Annie, Nuke and Crash, and Annie and Crash. All of them feel real.

But more than that, this film strikes at a level of reality, of a true attempt not just to tell a story or sell a script, but to show a real experience of what life in the minors is like, what it’s like to be on the bus and have a guy who won’t shut up, or to be forced to hang around guys who drive you crazy. There’s a poetry to this film that doesn’t happen very often.

I forget how much I love this movie until I watch it again. And the truth is, today I watched it twice because it deserves to be watched twice. This is a special film, and damn near perfect.

Why to watch Bull Durham: Baseball the way it is played, even if it wasn’t meant to be played this way.
Why not to watch: You’re biased against Kevin Costner, Susan Sarandon, and/or Tim Robbins.
Posted by SJHoneywell at 10:32 PM