Get Thee to a Nunnery!

While I haven’t reviewed it yet, I’m going to go on record now as saying that I really, really hate The Sound of Music. Imagine my displeasure when I discovered that there was another movie about nuns on the list. More nuns, and not the comical one from The Blues Brothers. I admit that I reacted poorly to this, even when I discovered it was a Powell and Pressburger film. I’ve learned to trust these two gentlemen. But still…nuns…. 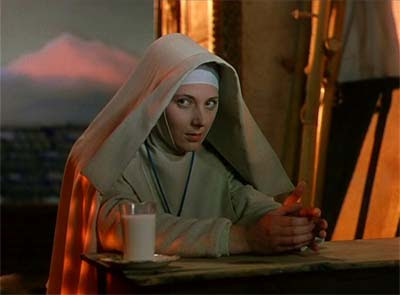 I needn’t have worried. Black Narcissus is a devastating film that, yes, is about a collection of nuns, but these aren’t the type who sing while dancing along Austrian hilltops. Instead, this is an intense film, one that goes right to the heart of the sort of thing that Powell and Pressburger seemed to love more than anything else: the darker parts of the human psyche and how those bad things are expressed in the real world.

We start with Sister Clodagh (pronounced KLO-da, and played by Deborah Kerr), who lives in a convent in Calcutta. She has been instructed to take another group of nuns into the Himalayas and start a new convent there. Going with her are Sister Briony (Judith Furse), Sister Blanche (better known as Sister Honey, played by Jenny Laird), Sister Philippa (Flora Robson), and the sickly and potentially unstable Sister Ruth (Kathleen Byron). Off they go, and they arrive at what used to be the home of a harem.

Here they are assisted by a trio of people. First is Angu Ayah (May Hallatt), the caretaker. She is a crusty old native woman who doesn’t much understand the reverend sisters. Second is Joseph Anthony (Eddie Whaley Jr.), a six-year-old child who speaks English, and thus can act as an interpreter for the sisters for the school they intend to set up. Third, and perhaps most important, is Mr. Dean (David Farrar), the local representative of the British government. He is unpleasant and cynical, and predicts the sisters will leave before the rains come.

Despite his unpleasantness, there appears to be a bit of attraction between Dean and Sister Clodagh. There’s also a significant one-way attraction between Sister Ruth and Dean. Things become more complicated when Dean drops off a young woman named Kanchi (Jean Simmons) who has been bothering him. When the new young general (Sabu) arrives for teaching, all manner of lusty thoughts are happening inside the convent, where they don’t belong.

The environment proves to be a hindrance to the women. The natives turn against them when Sister Honey attempts to treat an infant despite Briony’s warning not to. The baby dies and the people believe the sisters are responsible for the death. There is significant attraction between the young general and Kanchi despite her low status. Sister Philippa, who was to create a vegetable garden for the sisters plants flowers instead, and asks to be transferred.

Through all of this Clodagh is dealing with her reasons for joining the order in the first place. She loved a young man intently, and she (and the rest of the people in her Irish village) assumed that the two would be married some day. However, he had other plans that involved going to America and not taking her with him. Strung along and now dreadfully embarrassed, Clodagh joined the order as a way to leave first, and to hide her shame.

But it is Sister Ruth who takes up the last part of the story. She is completely infatuated with the sometimes-drunken, always rude, but still dashing Mr. Dean. She accuses Clodagh of the same infatuation, although Clodagh denies this. It’s in this scene (which actually happens before a number of the events mentioned above) that Black Narcissus takes its first hard left turn into something very dark. It’s evident in this scene that Ruth isn’t all there. She’s bordering on madness and obsession, although she hasn’t slipped into it completely.

The culmination of the film is Ruth’s departure from the convent, her confession of love to Dean, and his rejection of her. Ruth, naturally, puts all of the blame where it doesn’t belong, and acts as you might expect someone paddling with both oars a foot above the waves. I’ll say this—if nothing else, when Sister Ruth brings the crazy, she brings it in spades and with little bells a-ringing. She becomes something possessed by the end of the film, and is actually terrifying enough to send a small jolt down the spine.

Beyond this being a surprisingly gripping drama for being about cloistered nuns, the cinematography is truly something special. None of this was filmed on location, and the glorious mountain peaks the loom in the background of most outdoor shots were simply expertly created matte paintings. Most of the time, it’s impossible to tell.

Like any great drama, this film is less about the situation of the plot and more about the characters who act through it. As such, as a tale of loss, obsession, and guilt, it still manages to resonate despite its age. I expected very little here, and got far more back from a film about nuns high up in the mountains. I really should learn to trust great directors with their story rather than doubting them because of it.

It’s worth discussing the rather odd name of this film as well. “Black Narcissus” is the name of a perfume that the young general wears. Narcissus, according to mythology, was a beautiful youth who became enamored of his own reflection in a pool of water. That’s a level of introspection and self-study that both Clodagh and Ruth could understand.

Why to watch Black Narcissus: A realistic depiction of madness, passion and isolation.
Why not to watch: Well, it is set in a convent.
Posted by SJHoneywell at 11:50 PM