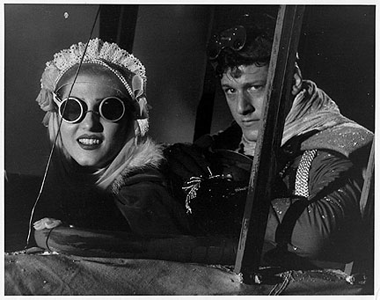 I frequently like to think of myself as the smartest guy in the room, a bit of ego and mental narcissism I freely admit to. I know that more often than not, I’m not the smartest guy in the room. A film like Guy Maddin’s Archangel is all it really takes to prove to me that I am often a novice when it comes to deciphering some of the more obtuse films that exist in this world. As a viewer and critic, this is the most difficult thing I’ve had to write in a number of months, perhaps since I started this project.

Archangel certainly has a plot of sorts, and characters and all that, but it also feels completely random. It’s surrealist cinema, which always strikes me sideways. I never know if I’m supposed to take it seriously or if I should be laughing at it.

So let’s talk about plot, shall we? It’s 1919 and World War I is over, but no one has told the people living in and around the city of Archangel. One of those people is John Boles (Kyle McCulloch) who is mourning the death of his love, Iris far more than he is mourning the fact that he has only one leg. He has promised to sanctify her cremains in the White Sea, but he loses the urn overboard a ship. This causes him no end of mental anguish that manifests itself into something like amnesia.

He is billeted in the house of a family that consists of the elderly Baba (Margaret Anne MacLeod), the obese and cowardly Jannings (Michael Gottli), his wife Danchuk (Sarah Neville), their son Geza (David Falkenburg), and an infant. Also evidently living in the house is Veronkha (Kathy Marykuca), who might or might not be married to Philbin (Ari Cohen). Philbin is also suffering from something like amnesia and believes that every night is his wedding night. Boles believes that Veronkha is actually Iris and pursues her, and Danchuk pursues him.

And then there’s lots of revelations and battle scenes and Veronkha decides she loves Boles and suffers her own amnesia, turning into Iris. Boles decides that the infant is his. Everyone goes off to war except for Jannings, who stays home and is gutted by the terrifying, semi-human Bolsheviks. He overcomes his cowardice, though, fighting back and killing one with his own intestines before calmly going back to where he was, lying down, and dying.

And then Veronkha runs away and Boles chases her and she remarries Philbin despite having annulled their first marriage and they fly away in a biplane while Boles stays on the ground and rides in a cart. Whatever.

Throughout this movie, particular moments struck me with the overriding thought of “What the fu…hell?” Not much of it makes sense. Geza complains to Philbin that his father died a coward and Philbin responds by saying that everything happens for a reason—someone shaved off his mustache in the night. Seriously, what the fu…hell? Should I be taking notes on this and trying to figure out what it means or should I look at a piece of dialog like that and laugh?

It’s evident that Maddin is paying a great deal of homage to the silents with this film. Everything oozes silent film heritage from the costuming, lighting, make up, sets, and title cards. This is a modern take on German expressionism without question. It’s also an homage to David Lynch. The first thing I thought of in terms of comparison while watching this was Eraserhead and it’s an opinion that never left me.

The version of this film that I found promised glorious black and white photography, which is much nicer than what I actually did get. What I got was a lot of muddy scenery, scenes that were difficult to see from any angle, and even title cards that were so faded at times that I had to pause the film and get an inch away to see what they said.

Also on this DVD were a couple other Maddin films. I watched the short called The Heart of the World, and I recommend it highly. I certainly recommend it far more than I do Archangel.

Why to watch Archangel: A true artistic vision of film.
Why not to watch: It’s the damnedest 80 minutes or so you’ll spend in front of a screen.
Posted by SJHoneywell at 7:59 PM